Mugicha, Bori Cha, or Barley Tea - whatever you call it, it's delicious!

Roasted barley tea is a tisane made from roasted barley, rather than a true tea. It is very popular in Asia, where it is called Mugicha in Japan and Bori Cha in Korea.

Barley teas or beverages of some sort, some hot some cold, are popular all over the world too. In fact, one of my favorite childhood drinks in Scotland was Robinson's Lemon Barley Water, which turns out to be quite related to the Mugicha I drink now with my Japanese husband!

Image of Glass of Mugicha from Wikimedia Commons.

Strictly speaking, Barley Tea is not a "tea" at all, since all true teas are from the Camellia sinensis plant, and barley tea is, well, from the barley plant.

I found a photo of barley growing in Scotland, my original homeland, so I just had to use this one even if the barley isn't quite ripe yet!

Barley Tea refers to a "tisane" made from roasted barley. So this is a bit different from the fermented malted barley that is used to produce alcoholic beverages.

Roasted barley seeds can be brewed directly in hot water. This produces a hot beverage that must be strained before drinking. It can be served hot or cold, but either way without milk or additional flavoring is best.

These tea bags are rather larger than the usual tea bag for a cup of tea! That's because they are designed to make a whole pitcher of the beverage. They contain ground roasted barley, and can be steeped in cold water for several hours (like overnight in the refrigerator) to produce the cold beverage directly, or put in boiling water for a shorter period to produce the hot "tea."

Barley Tea Drinks Around the World

Barley tea style drinks are popular around the world. For example, Horchata, one of the flavors of Aguas frescas originating in Mexico, may also be made from barley. And roasted barley is often used as a caffeine-free coffee substitute in America.

In Japan, Mugicha is most often served cold, like an iced tea. It's really a good accompaniment to Japanese food, just light enough not to dominate the flavor of the food. Also, since Japanese food is not usually very sweet, the slightly tangy flavor of the barley is perfect, much better than sweet lemonade or soda!

This is the brand of Mugicha we use in our house. We used to buy it at the Japanese food store, but it's a bit far to drive. Then a new one opened up that sells almost everything we need, but not Mugicha! Hard to justify the trip just for these bags of barley tea. I found that Amazon sells this brand and we're happily drinking Mugicha again any time we want!

You get a whole bunch of bags in each pack so it's really a very inexpensive drink. And the flavor is just great!

In Britain, a similar beverage known as "barley water" is popular. It is made from just boiled, not roasted, barley and usually flavored with lemon to produce a lemonade style cold beverage. Little did I know when I grew up drinking Robinson's Lemon Barley Water that this was going to be similar to my husband's Mugicha!

Lemon Barley Water is actually the official non-carbonated drink of Wimbledon - the Tennis Championships for those who don't know - as well as being a favorite of my childhood.

It tastes like (American) lemonade, but somehow a bit less sweet and sticky - must be that barley making it more healthy!

In Korea, Bori Cha is served hot in winter, like a plain hot tea without milk or sugar, and cold in summer. I remember being served this hot beverage in many stores while in Korea in wintertime. There would be a kerosene stove in the back with a tea kettle on top. The storekeeper would just pour some in a little cup and offer it to anyone who came by. It was really nice! Kind of comforting and cosy, and definitely encouraged me to step inside the little store and stay there and check things out while drinking the tea. Not a bad investment on the part of the storekeepers I reckoned!

Seems like hot Mugicha has become more popular in Japan too since the Japanese have added hot Mugicha in cans to their vending machine offerings. That's quite a strange thing, vending machines that sell cans of hot drinks! I suppose its more hygienic than the American cups that get different liquids poured into them that we have in convenience stores. Also, the Japanese machines are outside, so using the cups wouldn't be entirely convenient! In any case, I've had other kinds of tea in cans, not bad, so I suppose the hot Mugicha would work too.

Mugicha has been claimed to be beneficial to your blood. It seems to increase blood fluidity, and may also help cleanse impurities from the blood. At least the Japanese believe it's good for the blood!

Of course roasted barley is caffeine-free, so for anyone looking for a hot or cold refreshing beverage without caffeine in it, this is a good one!

In my opinion, barley tea is definitely a great alternative to the sugary soft drinks on the market, and to the "sugar-free" versions which have other unpleasant chemicals in them. Barley tea is quite tasty, but pleasantly so.

When you're looking for a beverage that's not just plain water but is remarkably refreshing, this is a great alternative!

Have you tried Mugicha?

I've never heard of barley tea. I believe I'd like the lemon barley water. I don't care for hot drinks much; tea, coffee or even hot chocolate. 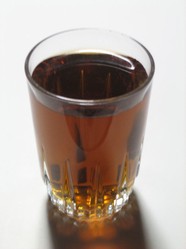 Not really a true tea, Yerba Mate is an infusion made from the yerba mate plant.
23%  3   2 jptanabe
Kinds of Tea

What are White Teas? How are they related to black (and green) teas. Are they good for your health?
Loading ...
Error!