My Trip to Northwest Arkansas

We drove to Arkansas to visit some of my family there. Its a very beautiful part of the country, with lots of creeks, rivers, and hills and valleys.

Going to Arkansas from Missouri

A small reunion of sorts.

Three in our family went to Northwest Arkansas recently, and it was about a 6 hour drive.  I love to travel, and driving is fast becoming one of my favorite modes of transportation other than boat.  I am not too fond of flying in airplanes much anymore for a few reasons.  So we set off, and drove through a lot of Missouri, some of which was in flood stage, to get there.  It was a nice time, in a nice compact, yet roomy little car.

We took turns driving, and even though it was so hot outside, we had a nice cool drive inside.  One of my favorite things to see along country rodes are old farms and farmhouses and barns.  Often its a smaller, historical little town, and I love to see those too.

We arrived and knew the family was going to have pizza and salad, and we headed on over to Cousin Caroline's house.  My Mother and Caroline grew up together, and her daughter and myself are similar ages now.  Part of the reason we went was to see my other Aunt from California that was also visiting.  We had the most fun, and even had arm wrestling contests and laughed and laughed.  We told old stories, and met some new members of the family. My cousin had newly married, and so had her daughter, so I had two new husbands to meet!

Next day we slept in some, but not too much, then went to visit with the family.  My cousin took me to get our nails done, as a surprise, and they gave us the royal treatment, let me tell you!  I was way too spoiled for sure.  I will be returning that favor somehow, as she insisted on not letting me pay, that stinker!

Later that night, we went to a nice little family owned restaurant, calle Front Porch Diner, where they had live music!  The food was truly exceptional, and I would highly recommend it.  The most fun part, was that my younger cousin and her new husband and two other band members, WERE the live music, and they are wonderful.  I had the best time.

Next morning, we visited their church, which was wonderful, and a young man that just got back from Macedonia as a missionary was preaching.  He is a member of that church, and I had spoken with him at length the night before.

Before we left to come back home, as it was a short weekend, we had a lunch get together at my cousins house.  We laughed and told old stories, and the new husbands had quite the eye opening, and it was so fun.  We took pictures, then some of the ladies cried, as we left because we had so much fun, and they didn't want us to go.  How sweet they all are!  We hope to do it again soon.

On the way home, we drove through Joplin Missouri, or a part of it, and witnessed the tragic scene there, and also saw much more beautiful country.  We came back into our area as the sun had just set.  What a wonderful weekend with family and new friends.

Come take a virtual tour of Mammoth Spring State Park and see for yourself wh... 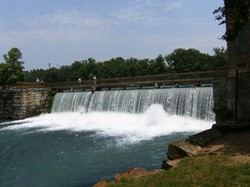 Come take a virtual tour of Mammoth Spring State Park and see for yourself why Arkansas is called "The Natural State."
Loading ...
Error!