There are many causes for dandruff and most store bought treatments don't work and are over priced. This simple remedy has kept my scalp dandruff-free for the last 3 years.

What Is Going On?

When I was chemically relaxed dandruff was a very big problem for me. No matter how often I washed my hair as soon as my scalp dried the huge flakes would reappear and my scalp would itch like crazy. I would use anti-dandruff shampoos sometimes twice a week and the dandruff would still reappear.As time went on I soon learned that what I had was seborrheic dermatitis which is just a fancy name (in my opinion) for “chronic” dandruff. This is a condition that causes inflammation of the skin, yellowish scab-like flakes, and sometimes oozing. I apologize for painting such a graphic picture, but if I can help someone rid themselves of the same condition its worth grossing a few people out.

Excessive scalp sebum (natural oil our skin produces) throws off the PH balance of the scalp and this in turns causes yeast/fungus to grow. The fungus is a-sexual and reproduces at a rapid rate feeding on the scalp oil. The more it grows the worse the condition gets and most overpriced shampoos and treatments that I tried simply did not work. Even while I was sleep I would scratch my head and wake up the next morning with a severe headache from the pain. I was very miserable and this went on for a year or so because I didn’t know what was going on.
Soon after the situation became worse my hair started to fall out.  Later I found out that having seborrheic dermatitis could lead to hair loss. The excessive oil  on the scalp drowns out the follicle root and the follicle dies and falls out.  I had all of the symptoms of seborrheic dermatitis; the yellowish flakes, excessive scalp oil, and redness of the scalp. I was shocked and alarmed to think that I had been walking around with this going on; but I was ready to find a way to get rid of it and fast.

Okay I won’t go into a long drawn out story about all of my trial and error let me simply get to my remedy. I am going to show you how to make a very inexpensive, effective, all natural remedy for even the most severe cases of dandruff. You will need the following ingredients

Black or Green Tea ( I use black)

Now let me tell you what each ingredient brings to table. How effective they are alone and what they can do combined to give you a very simple, affordable way to get rid of those pesky flakes.

You will need a spray bottle. Take 1 ½ cups of distilled water and bring to a boil. Add in ten tea bags and and ¼ cup of apple cider vinegar. Allow to steep for about 4 hours.  Pour about 8 ounces into your spray bottle and now add in 2 teaspoons of vitamin E and 20 drops of patchouli. Shake this mix well and store in the fridge to preserve. You can use a natural preservative like optiphen if you don’t want to store it in your fridge. This amount should last you on 1-2 weeks depending how often you use it.

Use this spritz on your scalp every time you wash your hair and in between washes as needed. Do not rinse out. You should see results with consistent use after about 2 weeks or maybe sooner.

**disclaimer** This article is not meant to take the place of your physicians treatment or advice. I am simply sharing what has worked for me.

5 Natural Remedies To Stop Hair Shedding
If you are having issues with your hair shedding or experiencing hair loss there are lots of natural remedies that you can use to help combat the issue.

How To Make An All Natural Hair Growth Oil For Hair Loss
Creating a natural hair loss treatment at home.
Updated: 01/19/2012, DeniseJackson
Thank you! Would you like to post a comment now?
1 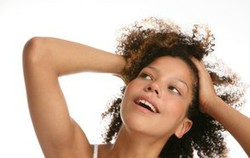