The Royal Mint has stunning new silver bullion coins for 2019.

For several years the Royal Mint has produced new silver bullion coins, often heralding in a new series with the first release.

In addition, the lunar series continues with the Year of the Pig silver coin.

The Queen’s Beasts coin series that started in 2016 continues with the sixth and seventh two-ounce silver coins, the Yale of Beaufort and the Falcon of the Plantagenets, with the White Lion being next. Two ten-ounce coins also have been released for the series, the Black Bull of Clarence and the Unicorn of Scotland. The ten-ounce releases trail the two-ounce releases.

The Landmarks of Britain series that began in 2017 continues with the fourth coin in the series, Buckingham Palace. It is likely a fifth coin for this series will be released later this year.

One coin, the Two Dragons one-ounce silver coin of 2018 may have been the first of yet another series, or it may be a one-year design. No indication of a 2019 Two Dragon coin have been forthcoming.

This is a series, since the 2019 issue is also available.  The design has been updated to include a ring on the obverse of the coin for 2019.

While the series could be said to be in its second year, the coin currently has two sizes.  New for 2019 is the one-ounce silver Valiant coin.

Perhaps the Royal Mint has found the ten-ounce silver bullion coins to be desired by the public.

The 2019 Royal Arms silver bullion coin features the Lion of England and the Unicorn of Scotland supporting the shield bearing the Royal Arms.  Over the shield is a crown.  Beneath the shield are other symbols, the Tudor rose on the left, and the thistle and shamrock on the right.

Whether this is the beginning of yet another series, or a stand-alone coin, is not clear at this time.

The variety of Royal Mint silver bullion, nice but often affordable coins, is great, and apparently growing.  Silver bullion coins make an excellent way to own bullion, and one can hope the value of a bullion coin will appreciate with its numismatic desirability.

The Royal Mint has images of its bullion coins at royalmintbullion.com.

The introduction image is ours.

The Valiant, the one with Saint George in silver, comes in a one-ounce size this year, but not last. Now it is affordable.

I had no idea about the unicorn of Scotland! Apparently it's Scotland's national animal!

I also like the coins you're showing here, especially as I'm particularly fond of the legend of St. George slaying the dragon.

No, the Perth Mint has even more than two sizes for some bullion coins. Also, some are minted in multiple metals. The Queen's Beasts series has two- and ten- ounce bullion coins, and one-ounce proof coins. what is unusual is not to have had both sizes the first year. Adding a size is a bit unusual.

blackspanielgallery, Thank you for the practical information and the product lines. In regard to the valiant silver coin, is it unusual in any coin to have two sizes already available in the second year? 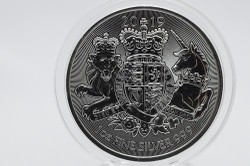 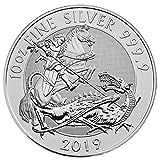