A glimpse at the Russian born Canadian painter of Native American portraits.

Nicholas de Granmaison was born into nobility in Russia on the 24th of February in 1892. His lineage is of French and Russian ancestory. He studied art, history, music, and languages in Moscow until, at age 19, he entered the military. While he spent four years in a prisoner of war camp, he turned to art to help him through the tedious days of being confined.

After the war was over, de Grandmaison traveled to England and registered as an artist emigre. He preferred the life of an artist over the life of a military officer. In London he studied at Saint John's Wood School of Art and was able to use his connection to the aristocracy to get commissions to paint.

In 1923, Nicholas de Grandmaison traveled to Winnepeg, Canada where he painted portraits of children and worked for an engraver. In 1930 he had his first encounter with First Nations people (Native Americans) and a career was born.

The photo at the right is of a print from de Grandmaison's company Last Arrow  that I recently added to my own collection. The name of this wonderful "Grandfather" with the soleful eyes is Chief Coldweather or Makes-Cold-Weather. My print was graciously identified by Sonia de Grandmaison, the daughter of the artist. She tells me that Chief Coldwater was a Pikuni Blackfoot who resided in both Canada and Browning, Montana.

An Artist Records The History Of Natives Of North America 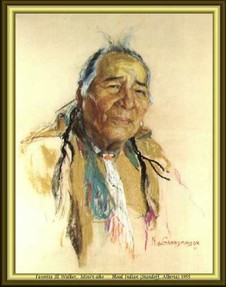 de Grandmaison dedicated his artistic career to recording the faces of the Indigenous Peoples of North America after his first trip to Manitoba around 1930. In Alberta he was introduced to the Sarcee, Blackfoot, Peigan, Stoney, and Blood Tribes and began to work his portrait magic in pastels. Nicholas de Grandmaison looked at the Plains Indians as the aristocrats of North America and felt compelled to share the rich history of a glorious people through their faces.

The image here to the left is of Favorite Ill Walker (Mini't-siko) from the Blood or Kainai in Alberta in 1955. The Kainai, are a part of the Blackfoot Confederacy.

A Peigan Portrait Of Bull Head 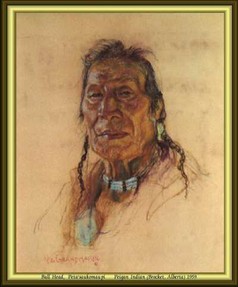 Bull Head was of the Peigan tradition in Alberta, Canada in 1959 when Nicholas de Grandmaison painted his portrait. The Peigans are a part of the Blackfoot Confederacy and live both in Canada and the United States today.

It is believed that the name Peigan is the English version of the word Apikuni which means "scabby hides" and would have referred to the imperfectly dressed robes of the women of this tradition. Bull Head's people are also sometimes referred to as the Pikuni. 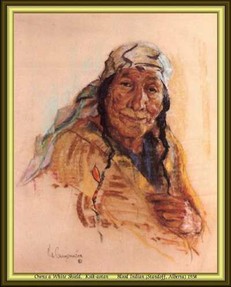 In 1960 Nicholas de Grandmaison put a trademark or copyright on his work under the name of Last Arrow LTD. It was a way for him to sell his pastel portraits and he began to reproduce some of his originals into prints to sell. He also used his trademark to obtain commissions for portraiture and other artistic commissions. I have one of the reproduction prints with his copyright information on it.

The image to the left is of Owns A White Shield of the Blood Tribe in 1938.

I want to own more of de Grandmaison's art

I am not an artist but I do so very much appreciate the gift that others share with us who are artistically challenged. I am not adept in the nuiances of the mediums used to create art. I would think that doing portraits in pastels would be rather difficult though.

What I love about Nicholas de Grandmaison's art is the fine detail. When you look at one of his portraits it almost seems to be alive. He created faces that have depth and soul. They look more like a color photograph than something that was drawn.

I so appreciate that de Grandmaison was able to document hundreds of men, women, and children who would never have been known to us otherwise. These were not people who would have commissioned a portrait. They were not, for the most part, famous. Yet, Nicholas de Grandmaison gave them respect and dignity by painting their faces for the world to know.

I will now be watching for other prints to become available to add to my new collection.

Except for the first image on this page all Nicholas de Grandmaison images are from First People of America and Canada : Turtle Island a site about North American Indians. I thank them for generously allowing the use of the photos for educational purposes.

Choose a paper made for pastel art

Using Pastels As His Medium For Art

What do you think of the portraits of Native Americans by Nicholas de Grandmaison?

Thanks for stopping by today! I hope you enjoyed learning about the Canadian Painter, Nicholas de Grandmaison.

I have two prints -- one of Starlight and a slightly smaller indial child with no name but in the lower left hand corner says "oxborough" -- my mother had these for years and I decided to investigate the artist and what their worth might be.

Pity the portrait image is distorted - I used to have a signed print of this one.

Hi! I have two prints of grandmaison for sale. Chief coldweather and one more (i dont now the name). Please contact me if someone is intrested.

My father was a personal friend of Nickie.He did the prortraits of all of our family:mother father sister,brother and me. I have my protait which was done in about 1945. I have 2 of his lithos and would like to acquire the rest of the set (6). They originally sold in Toronto for about $25 each in about 1962. Contact Dave @ [email protected]y.com.

I didn't know of him, but I enjoyed reading article. And I love his work!

I have a print which I would like to sell of a native American (not shown above) but is absolutely brilliantly done. Any idea of price?

A message to Brian & Pam LeClair
I too have one of the original prints of "Starlight". Seems to have been a limited production as (until your post) hadn't come across any mention of this particular print. I was living in Alberta when my mother bought it - some 50 years ago; I emigrated to NZ and still have the picture and like you am curious as to it's value.

Love his work. Years ago we came intopossession of 2 of his works the first is of Chief Coldweather (which is identical to the one pictured above) and the smaller is called Starlight (a small native girl). The smaller is by far my most favorite and is beautiful. We live in Winnipeg Mb and they were framed locally, the framing is quite old and were done by Eatons. If you have any info on Starlight or any thing else pertaining to these prints could you please e-mail us. We would also appreciate a value if you could supply it, for insurance purposes.

I just bought two of his prints at a yard sale, any idea of their value?