What is Parkinson's Disease ? The very name sends a chill through most of us. I know - because my husband has it and I live with it 24 hours a day. Literally 24 hours a day.

It is the thing which most of us dread. Is it genetic or environmental? Researchers can't agree.

November 2011
" I don't want to worry you … but I think there's something wrong with me. Something serious. "
When we make our marriage vows, “in sickness and in health”, we don't expect it to be sooner rather than later - sooner being aged 57.
We made an appointment with our doctor and everything moved quickly from there.

What had alerted my husband?
When he combed his hair, his hand wouldn't move to the left-hand side of his head. When he brushed his teeth, his hand stopped mid-way and wouldn't move over to clean his left side teeth.
His handwriting had become very small and illegible.

I was immediately proactive. When he made his announcement, I went into the kitchen and got him some Evening Primrose Oil, and Vitamins. I assumed he had MS or a brain tumour.

What is Parkinson's Disease ?
People with Parkinson's Disease don't have enough of the chemical dopamine in the brain because some of the nerve cells in the brain which make it have died. The disease is characterised by slow movement, stiffness of the body, shaking of the limbs when they are not in use.
Eventually it progresses to dementia and death.
Apart from the above symptoms there are other minor symptoms which people may not notice but taken all together they all add up to Parkinson's disease .
These may include ;-  …
staring ( "Parkinson's mask " )  ...
- People with Parkinson 's blink less so seem to stare more.
- loss of sense of smell ...this occurs years before other symptoms
- sleeping problems and insomnia
- difficulty turning in bed
- memory loss
Not everyone experiences all these symptoms.

There are different types of Parkinson's. My husband's mother had it but we are told that their type is not hereditary.

Most types of Parkinson's are because of an unknown cause. These are known as IDIOPATHIC Parkinson's

Vascular Parkinson's is caused by restricted blood flow to the brain.

Medication induced Parkinson's . Some medicines interfere with the production of dopamine in the brain.

Lewy Body is often misdiagnosed as Parkinson s because it is similar.

Constipation, bladder problems, dry eyes through lack of blinking are all extra effects. Sometimes because of lack of medication during sleep sufferers can shake in their sleep. This means that I never get a full night's sleep either and haven't done for several years.

Medication is hit and miss and it takes time to find the correct dosage of dopamine. The missing dopamine is replaced by medication because the disease is incurable and progressive, terminal. End of.

It can be managed though by everyday monitoring and exercise.

The timing of the medication is important. My husband takes more than 50 tablets a week and I ensure that he has an excellent diet and lots of exercise. He plays badminton twice a week and dances once a week.

Dancing is reported to be one of the best therapies for Parkinson's. Sufferers have to move in time to music so have to keep going. Dancing is good for balance too.

A boxing ball for non-contact boxing is reportedly another good therapy.

The future is bleak for us but I see it as part of my marriage to make sure that my husband is as comfortable and " healthy” as possible.

Because he had early intervention and started his medication early, we have been able to manage his condition. There are many news items of cures, but they won't be available during our life time. Let's hope they are developed soon for other people.

Neuro physiotherapy uses  techniques which improve the bent shoulder stoop, facial exercises and the placing of feet to help walking.

The gait of Parkinson's sufferers is distinctive, as it involves leaning forward and making a shuffling movement rather than walking with the heel down. What this research showed is that low back pain and the conditions that generate it might have a localised neurological origin in the lumbar region which produces symptoms resembling the Parkinson's gait. Some people who walk with a Parkinson's gait have back problems but no other symptoms.

Gosh what a waste of research money ! How very annoying.
How can lower back pain movement be associated with Parkinson's movement ? There is no comparison. Parkinson' s patients don't have any lower back pain that is part of Parkinson 's disease. ..why would they ? I don't know any Parkinson patient who has symptoms like you describe and my mother in law and also my sister in law's father in law had it too. Back pain would come from stooped shoulders so upper back not lower back. Any lower back pain would be some other cause.
TEST …. and warning
If someone holds both hands in front of them with thumb tops touching each other and other fingers in a c shape and reverse c shape above thumbs ...then rapidly hit the thumbs with the fingers rapidly up and down , quick as you can. IF ….. the fingers of one hand hit the thumbs at a much slower rate than the other hand, then get to the doctor ASAP.

Parkinson's gait is caused by the placement of the toes and heel on the floor and is totally distinctive from lower back pain movement.

Sometimes chronic lower back pain produces symptoms in one's gait closely resembling Parkinson's. Look up this article, What if low back pain is the most common Parkinsonism in the world? It is an academic paper by Jacobs, Henry and Horak which argues that gait difficulties associated with low back pain may be have a partly neurological origin and therefore produce symptoms similar to the neurologically caused Parkinson's disease.

The paper argues that low back pain is to be distinguished from Parkinson's by its specific location. Symptoms in other parts of the body are absent.

The neuro physiotherapy is doing an amazing job on helping my husband's posture, balance and coordination. he has had 2 sessions.

Try neuro physio therapy if you have Parkinson's Disease. It is life changing.

Thank you for the addition!

What a lovely thing to say, ty.

It has taken me 8 years to get so knowledgeable. My aim here is to give some information to help others so they don't have to spend 8 years getting it right.

I did however forget Neuro -physiotherapy and I am going to add a paragraph above.

I wish you and your husband all the best. Not everyone is lucky to have a loving partner at their side in hard times. These degenerative diseases are hard on everyone in so many ways.

As for exercise, most of us should do more. You and your husband are quite an inspiration :)

Dusty,
If you look to the right side, P'S PEAK , you will see how I took him up a mountain last year.

Early intervention and medication are key to slowing the progression.

Discovering that your Love has Parkinson's is frightening. When he announces...

Climbing my husband's favourite peak in May to tick off his to do list was no... 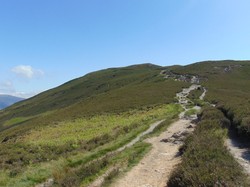 Discovering that your Love has Parkinson's is frightening. When he announces he wants to try to climb his favourite peak while he still can, it's terrifying. Should I support him?
80%  14   6 Veronica
Travel & Places Climbing my husband's favourite peak in May to tick off his to do list was nothing compared to his wish to visit Rome one more time.
Loading ...
Error!