There are many versions of the Passover Haggadah that you can choose to read at your seder, and this article will point you in the direction of where to search for them.

Like many families, my family has been celebrating the Jewish holiday of Passover since before I was born. Passover (Pesach) is one of the few holidays that most Jews still celebrate in some fashion even if they do not pay much attention to the Jewish calendar the rest of the year. Passover celebrates the Exodus from Egypt, when the Israelite slaves were freed from slavery. Freedom from slavery is a theme that resonates with just about everyone, which is one of the reasons this holiday has continued to be observed by Jews the world over.

Choosing the Right Haggadah for Your Seder

Passover is different from many other Jewish holidays, in that the main service is done at home instead of the synagogue. Families gather around the table for a seder or ritual meal. The seder has a specific order which is outlined by the Haggadah--the guide we use for this service. The Haggadah contains all of the prayers, rituals, songs, readings and stories that we are to say and do during the seder.  There are many versions of the Passover Haggadah that you can choose to read at your seder, and this article will point you in the direction of where to search for them.

Which Pesach Haggadah Do You Want to Use at Your Seder?

Depending on your level of religious observance, how many children you have under 5, and many other factors, will make a difference as to which Passover Haggadah you choose to use during your Passover seder. Some families have a Haggadah for the adults, and another one for the children to use, to help the children understand the meaning of the seder.

Other families may have a traditional leader's Haggadah that is larger and more illuminated than the standard Haggadah. My family's traditions have changed over the years since I was a child. We usually have our seders at my parents' house because my parents are the most traditional of all the relatives, and we have had many different Haggadahs (Haggadot) over the years.

When I was young, our family would go through every single part of the Passover seder and add more.  We read interpretations, added prayers for oppressed people in other parts of the world, and did special additions to the seder for the children.

Following New and Old Traditions of the Passover Seder

As an adult, with older parents, and teenage children, our seder is shorter and more compact.  Interestingly enough, it is my parents who seem to have less patience for the length of the service.

My favorite part of the Passover seder is the Haggadah itself, and the reading of the story of the Exodus, and the special foods we eat on Passover.  However, many people buy special Haggadahs that relate to different parts of Jewish history including remembering the Holocaust, the flight of Jews from Ethiopia, and other times of slavery and oppression.  Some Haggadahs are more liberal, relating Jewish slavery in Egypt to modern American history of African slavery, and denial of rights to oppressed groups like women, African Americans, and homosexuals.

While many others prefer a very traditional Jewish Haggadah for their Passover seder.  Whatever your leanings, you will find some beautiful Haggadahs, that you and your family can use as you sit around the seder table.

How to Make a Passover Seder
Passover is an important holiday in the Jewish calendar, and one that is very highly celebrated by both observant and non-observant Jews.

How to Make Charoset for Passover (My Bubbie's Recipe)
Charoset is the food that represents the mortar used for bricks during the time of the Israelite slaves in Egypt, whose freedom is celebrating during the Passover holiday.

For collectors, there are numerous vintage and antique finds if you are lucky, because the history of Passover and Haggadahs goes back as far as the printing press.  Ebay is a great place to start your search for collectible Haggadahs.  Many of the early Haggadahs were illuminated similar to other early religious books, and many Haggadahs contain beautiful depictions of Jewish art.

Finding antique and vintage Haggadahs in excellent condition is much harder because like the Haggadahs in my family, Passover Haggadahs were meant to be used, and were used around a food laden seder table.  I can't tell you how many wine stains, and matzah crumbs have made it onto the pages of the Haggadahs that we own.

The art you may find in a Passover Haggadah reflects the culture where the Haggadah was printed.  Jews can be found in most parts of the world, and have picked up much from the cultures around them.  Therefore, the art you find in most Haggadahs will also reflect the culture of the outer community or country.

Languages Passover Haggadahs are Written In

Of course, Haggadahs can also be translated into any other language that Jews speak in any country.

Collecting Passover Haggadahs is a great way to learn about Jews and Jewish history.  You can trace the migrations of people from one country to the next, as they carried their precious Haggadahs with them.

When my parents travel, one of the things they like to do is buy a Haggadah from each country they go to, so that they can compare them to the ones we have.  It is very interesting to see what each Haggadah emphasizes, and the different illustrations.

It is time to shop. All the stores have Passover food already.

Let's see . . . which Haggadah will I use this year? Well, I only have one. Maybe I'll buy myself a treat for the holiday and get a new one.

Good question. I don't know the count, but they have a lot of them, and they do visit synagogues everywhere too. :)

What an interesting idea to buy a Haggadah wherever you travel. How many have your parents collected till now?

How to Make Charoset for Passover (My Bubbie's Recipe)

Charoset is the food that represents the mortar used for bricks during the ti... 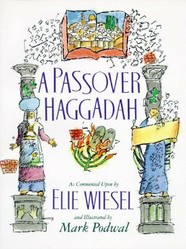 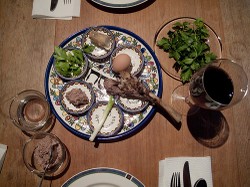 How to Make Charoset for Passover (My Bubbie's Recipe)

Charoset is the food that represents the mortar used for bricks during the time of the Israelite slaves in Egypt, whose freedom is celebrating during the Passover holiday.
49%  3   6 wrapitup4me
Passover 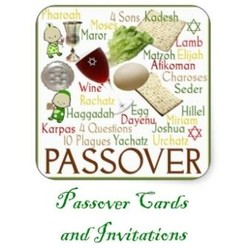 Personalize invitations to your Passover Seder or your Passover Holiday greeting cards. It is so impressive to send matching cards, envelops and postage.
Loading ...
Error!