Edinburgh Zoo has a a great penguin collection - and you can watch them take their walk outside their enclosure every day!

Edinburgh Zoo is one of my favorite places to visit, and the penguins are surely my most favorite inhabitants! Not only are they fascinating to watch in their enclosure, which is pretty big and of course has a large area of water that they jump into and swim around in, they also take a walk outside every day - the penguin parade! They seem to really enjoy their walk, as do all the visitors and even the staff who take care of them.

But perhaps the best thing about Edinburgh Zoo is that we can watch them live from anywhere in the world via their live "penguin cam"! Check it out, and you'll be fascinated (just remember to watch during daylight hours in Edinburgh, they don't have lights at night).

The Royal Zoological Society of Scotland was founded in 1909, and Edinburgh Zoo actually opened in 1913, on 82 acres of parkland on Corstorphine Hill. When I was young I didn't always like zoos so much because the animals were stuck in cages and looked miserable. When I visited Edinburgh Zoo, however, I got excited. There were several large, open enclosures for the different species, with ditches and moats to separate the animals from the visitors. They didn't seem miserable! And I loved the penguins, especially when they came out and walked around doing their Penguin Parade!

Edinburgh Zoo is known throughout the world for its penguins. In January 1913 three King Penguins were brought to the zoo from the Christian Salvesen whaling expedition. The first successful hatching of a King Penguin chick occurred in 1919 and penguins have been breeding there ever since.

Isn't that King Penguin chick ridiculous - he looks bigger than his parents with that huge fur coat!

King Penguins live in Antarctica, and have four layers of feathers to keep themselves warm - that sounds like a good plan! The outer layer feathers are waterproofed with oil. The chicks are born without the oily outer layer of feathers but have a brown-grey down which moults into a darker brown thick, woolly coat. The chicks have to stay on land until those fluffy brown feathers fall off, which takes about a year, so they look pretty big before they're ready to start swimming!

When they do swim, King Penguins are the best! They dive deeper than any other penguin, often over 700 feet (200 meters), and as much as 1000 feet (300 meters) on occasion. They generally stay submerged around 5 minutes, foraging for fish and squid.

In addition to the King Penguins, Edinburgh Zoo also has colonies of Gentoo and Rockhopper Penguins.

"March of the Penguins"

If you didn't already think penguins were amazing creatures this movie documenting a year in the life of Emperor Penguins surely will make you appreciate them. Edinburgh Zoo may not feature Emperor Penguins, whose life of sacrifice and commitment to rearing their young makes them worthy of the greatest respect in my book, but after this movie came out I can't think of penguins without thinking about those amazing Emperors. And King Penguins do look like them, only a bit smaller!

Here's such a cute penguin!

He may be only 3 inches (and a bit if you count the tuft on his head!) tall, but he evokes a lot of love when you look into his eyes.

The Gentoo Penguin is about 2 to 3 feet (55 to 90 cm) tall and is the next largest species after the Kings and Emperors. These penguins have a very obvious wide white stripe across the top of the head. They are pretty active, and are actually the fastest penguin swimmers.

Gentoo Penguins are known for their nests. Well they're birds right! But these nests, while circular like a normal kind of bird nest, are made of stones. Not just any stones either; they fight over the good ones! And apparently females can be courted by a male offering a good looking stone.

See the Gentoo penguins at Edinburgh Zoo on their nests with their eggs. This zoo is famous for its success in breeding Gentoo penguins - check out the video to see how they do it!

The Oscar-winning "March of the Penguins" was such an amazing cinematic moment for penguins, but "Happy Feet" takes it a step further! Also featuring Emperor Penguins, this animated movie tells the tale of a young penguin who can't sing - yes, Emperor Penguins do find their "soul mate" by their song! Instead, "Mumble" dances, and so this musical extravaganza follows his travels as outcast from his own colony he searches for his mate. This movie also features a crazy Rockhopper Penguin, only slightly exaggerated in style from the real ones you can find at Edinburgh Zoo!

Rockhopper Penguins are so called because, unlike most other penguins which get around obstacles by sliding on their bellies, Rockhoppers try to jump over boulders - rock hopping - despite the fact that they are kind of little (less than 2 feet tall).

They are also well known because they have yellow crests. Actually, these are straight, bright yellow eyebrows that end in long plumes. To complete the rather wild look, they have red eyes!

Here are the Edinburgh Zoo penguins on a walk outside their enclosure!

One thing that I really like about the penguin parade, apart from seeing the penguins right up close, is that the penguins choose whether to participate or not. So if they don't want to walk, they don't have to. But, as you can see, some of the little Gentoo Penguins get quite excited about it! The King Penguins are, well, more majestic.

The webcam is set to show the Penguin Pool. There's also a Penguin Cam that gives an underwater view.

There are no lights at night, so make sure you're watching during daylight hours if you want to see anything! Oh, and they're really fascinating, so be warned you may find you're spending more time than you expected just watching these penguins.

If you've enjoyed the penguins walking on their daily parade, and seen what they're up to live on the webcam, now it's time to see them fly. Haven't we always wondered how penguins can be classified as birds? They seem more like weird animals, walking around awkwardly in their "tuxedos" with their "arms" stuck out to the side! But watch them here and you'll see that really those "arms" are wings, and they have such grace when they use them to fly. Just like birds!

At Edinburgh Zoo you can go underneath the penguin enclosure and look at the pool through windows. OK, yes, they're underwater not in the sky, but forget that for a minute and just watch. I call that flying!

Penguins can fly and here is the proof. Well, I didn't personally see them fly. However, it was on BBC, so we know it has to be real. Take a look at the video and you have to admit, penguins can fly.

Sir Nils Olav is the most famous penguin at Edinburgh Zoo. He got his name from two people: Major Nils Egelien, who organized his adoption by Edinburgh Zoo, and King Olav of Norway. Since that time he has been the mascot of the Royal Norwegian Guard, and inspects them every time they visit Edinburgh for the Edinburgh Military Tattoo. He has received many honors and promotions during his service.

In 2005 Edinburgh Zoo was presented with a four-foot tall bronze statue of Nils Olav.

In 2008 the penguin was actually knighted, becoming Sir Nils Olav! This great honor had to be approved by the King of Norway himself, King Harald V. They had a big ceremony of course!

Have you been to Edinburgh Zoo and seen the penguins?

Thanks. Yes, I love that huge young penguin in his brown fur coat!

What a fun article on penguins! I like the photo with the adolescent that is brown.

So true - penguins make me happy too!

I have never been in Edinburgh. Penguins, however always help me to get in better mood.

My review of "Jonathan Livingston Seagull" by Richard Bach. This book was muc...

The story of the Norwegian St Bernard dog, Bamse, who became a war hero. A me... 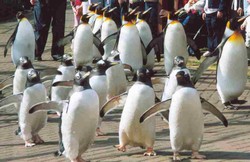 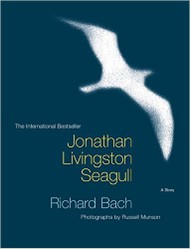 My review of "Jonathan Livingston Seagull" by Richard Bach. This book was much loved by "baby boomers" as an inspirational allegorical tale.
47%  4   5 jptanabe
Large Dog Breeds 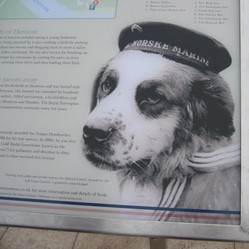 The story of the Norwegian St Bernard dog, Bamse, who became a war hero. A memorial statue is in Montrose, Scotland.
Loading ...
Error!