1819 will see the bi-centenary of The Peterloo Massacre when an armed Militia were sent in to attack a peaceful demonstration of people who had come for a day out.

When famous democracy orator, Henry Hunt ( diary pictured above ) turned up in Manchester to attend "The Manchester Meeting" In August 1819, he could not have envisaged that the day would end in carnage and slaughter and that he would eventually be sent to gaol. It was an event which would haunt him all his days but had important consequences on the course of 19th Century British History.

What lead up to the events on that fateful day, what were the local and national sparks ? Here is a little background to a day which should never be forgotten.

To understand better what happened in the lead up to the event, we need to take a look at the Corn Laws. The Corn Laws were passed between 1815 and 1846, and set restrictions on imported corn. The aim was to keep grain prices high to help the home economy. The laws raised food prices and were very unpopular.  After the Napoleonic Wars ended with Waterloo in 1815, corn prices went down, and so the government passed the Corn Laws to keep bread prices high. There were riots nationally. There was also discontent about voting rights and representation. Lancashire only had two MPs to represent the whole county.

A little-known event is that of the Sandy Mount Fray which happened in Stockport, some 6 months before the Manchester Meeting aka Peterloo.

Months before Peterloo, there had been a protest meeting in Stockport and the militia had been told there was to be no violence. Unfortunately, the crowd turned on the militia who could not retaliate and some were badly hurt.

Consequently, 6 months later, the militia were ready to retaliate.

It is perhaps difficult to envisage what the bustling Peter's Square in Manchester would have looked like 200 years ago.  Nowadays it is full of commuters, visitors to the magnificent Central Library and loud with the hooting of trams. 200 years ago though it was called Peter's Fields named after a nearby church. Who would think that even amidst the city bustle that this was the scene of an outrage against over 60,000 peaceful protesters in August 1819. As Waterloo had happened in 1815 and that was soldier against soldier by September 1819, The Manchester Meeting became known as Peterloo where it had been soldiers against innocent civilians.  By the end of the day, the local hospital, The Royal Infirmary was full of casualties and 17 people died from their wounds.

The Manchester Meeting had been planned for August 2nd but was forced to be cancelled. It was then set for August 9th but again was cancelled. On 16th August though, the meeting went ahead. Thousands of people walked to Manchester for a peaceful day out to hear the speakers including Mary Fildes and Henry Hunt speak about voting and the Corn Laws. The Manchester magistrates met at about 10.30 am at "The Sun Inn” on  Deansgate to discuss how to stop the meeting which was due to start at 1pm.

The organisers went to great pains to ensure that the rally was a peaceful one and did not provoke a reaction. Henry Hunt arrived at about 1.00pm and he with some supporters stood on 2 carts which had been roped together as a platform.  Banners bearing slogans such as “Love ", “No taxation without Representation ", " No corn Laws". As the crowd gathered, the magistrates' version is that they wanted to see the Stage. Whatever the reason, they sent the militia in on horses to clear the way. They were soon joined by soldiers, cavalry, and special constables to arrest the speakers. There were shouts and groans from the crowd who linked arms to protect their speakers. The troops waving sabres charged on the 60,000 crowd trampling people with their horses.   Peter's Field was a scene of carnage. The main organisers including Henry Hunt were arrested.

A year later Henry Hunt was in gaol. He was still angry, hurt and traumatised that his meeting had had such devastating consequences.  His journal entry for that day reads,

“I eat no meat this day.
I sincerely pray that I may live to witness the condeign punishment of every Scoundral that was instrumental and accessory or principal or in any remote degree concerned in the infamous, cruel, cowardly, unprovoked and pre-meditated assassinations, cuttings and murders  of peaceable men, women and children at Manchester on this day twelve months."

Below is a list of The Peterloo dead. For their sake it should never be forgotten and I hope Manchester City Council acknowledges it in 4 years’ time.

The film was superbly received . Superb acting by Maxine Peake especially. 2019.
The book is excellent but text books are less well received than films. Prof Robert Poole is excellent and a charming, modest man.

You mention below, among answers to questions, a book release by Professor Poole and a film release by director Mike Leigh for 2019.

How were the Leigh film and the Poole book received?

I have learned some new information about the build up to Peterloo so I have added it above.

There are over 170 events going on all over Manchester this summer for Peterloo.

People were not averse to walking some distance then, but I don't know.

Frank,
Would they have walked 6 miles to attend do you think ?

Our English ancestors were not living in Manchester at that time, but they were not far away, only in the vicinity of neighbouring Salford/Eccles, so they could have been present at Peterloo., though there are no records of them and there is no evidence that any were hurt. Our Irish ancestors had not arrived by then.

The bi centenary of that appalling event in Manchester is 16th August 2019.
There are several events all over Greater Manchester leading up to it and during it.

There is also a new book by Prof Robert Poole.

In British prisons, at this time, prisoners families paid if they wanted better rooms. food and treatment. Wealthy prisoners would have paid substantially for better gaol conditions.

Veronica, You mention in the follow-up article on Henry Hunt that the orator was wealthy before going into jail and impoverished after. Did he have to pay for his care and food during his incarceration?

The Suffragette Campaign and their bombing of Alexandra Park M...

A little known event in English suffrage history had its centenary in 1913. H... 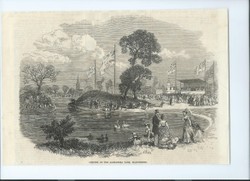 A little known event in English suffrage history had its centenary in 1913. Here is a brief description of the background of why Suffragettes bombed Alexandra Park Manchester.
64%  12   4 Veronica
Georgian Era

As a follow up to the Peterloo article from last month, I was asked to do a piece on exactly who Henry Hunt was and what his background and importance was. Here are a few points
Loading ...
Error!