Pink Slime and Job Losses in Texas, Kansas, and Iowa

For many parents pink slime is a nutritional concern, for other parents the pink slime controversy could cost them their jobs and the salaries that pay for food for their children.

Faced with mounting criticism and a dwindling market, Beef Products, Inc has suspended production of it's beef additive, popularly known as pink slime, for 60 days - at three of its four plants that produce it. Workers laid off because of the suspension will receive their salaries and benefits during this time. The plants are located in Amarillo (Texas), Garden City (Kansas), and Waterloo (Iowa). Approximately 200 workers at each plant have been affected by the suspension. A plant in Dakota Dunes (South Dakota) will continue producing pink slime. Dakota Dunes is the corporate headquarters of Beef Products, Inc. Texas workers produced about 200,000 pounds a day of pink slime, while workers in Kansas and Iowa produced about 350,000 pounds a day. It is unknown how much pink slime is produced at the South Dakota plant. At this location the Beef Products, Inc plant shares a common wall with one of Tyson Foods largest slaughter plant. Meat trim is transported from Tyson to Beef Products, Inc by a conveyor belt. Cargill, Inc. the second largest producer of pink slime has also announced that it would cut production. It has not announced any specific job losses or closed plants.

AFA Foods filed for bankruptcy in April 2012. One of the largest ground beef processors in the United States, it saw it's markets erode as one grocery store chain after another announced it would no longer carry hamburger with pink slime. AFA Foods produced about 500 million pounds of ground beef products each year.

Listen to the Beef Products, Inc explanation of ammonia-treatment for your food. Then Jaime Oliver's criticism for an overview of the issue.

Given the current uproar over the ammonium-hydroxide treated beef-cuts, it's surprising that any pink slime is currently being made. But it is estimated that 7 million pounds of it will be consumed in school lunches this spring. The United States Department of Agriculture (USDA) will allow school districts to opt out of the beef with pink slime starting in September.

While the USDA continues to be a pink slime customer, many supermarket chains have not. The list of grocery stores no longer carrying pink slime enhanced beef include Safeway, Ahold (Stop & Shop and Giant), Costco, Publix, H-E-B, Whole Foods, Kroeger, Supervalue, Food Lion, and Gerrity's. Wal-Mart will offer their customers a choice.

Because the ammonia-treated fat and beef waste products are considered natural by the USDA and FDA, it is no requirement to disclose it as an ingredient.

There is no way to know just how deep consumer resentment will cut on this issue or how long it will last. Food processors and agri-business giants might do well to start to listen to consumers and anticipate future outcries about "natural" fillers and flavor enhancements.

It is possible that it will enter presidential politics. Eldon Roth, the founder of Beef Products, Inc contributed $190,000 to Mitt Romey's state-level Political Action Groups in 2010.

The support goes both ways. Romney praised Roth as an American success story in his book No Apology. Roth started out as a blue collar worker and worked his way up. Roth isn't Romney's only connection to the beef industry. John Miller, one of the Romney campaign's national co-chairmen is a former CEO of the National Beefpacking Company. Roth is an investor in this company.

Romney has not made a statement regarding pink slime and food additives. Several republican governors have made visits to Beef Product, Inc plants in an attempt to bolster public opinion.

Rhode Island school districts have voted not to purchase beef with pink slime included in it. Despite several of its districts on the verge of insolvency, the state will not use the cheaper beef products.

Pink Slime is in More than Just Meat

Pink slime filler is not just used in hamburger. It has been added to a diverse range of products for years. According to the National Meat Association “pink slime” has also been used in puddings, baked goods, cheeses, chocolate and other processed foods. Because it doesn't have to be listed as an ingredient, you have no way of knowing which ones. But as consumers begin to demand more comprehensive labels, it should continue to erode the pink slime market.

One of the most frustrating parts of this whole debate is the lack of control that individual consumers have in making decisions. Because the ammonia-treated byproducts do not have to be disclosed on labels, consumers must rely on the beef packers and supermarkets to vet their food. Now, at least one beef processing company is petitioning the USDA to change its labels.

The USDA will not disclose which beef producers have requested the change so that consumers will know that pink slime is in it. But one of the largest Cargill, Inc. confirms that it is re-examining its label information.

According to the Iowa Beef Industry Council the beef industry is a multi-billion dollar industry. In 2008 it reports cash receipts related to cattle and calves totaled $2.882 billion. There were 12,886 directly related jobs to the cattle industry and 26,500 related jobs. Nearly 4 million head of cattle were located in Iowa in January 2010. It ranked 7th among all states for cattle and calves. it ranked 4th for cattle and calves on feed. In 2009 Iowa produced 7.48% of all grain feed beef in the United States. There were 30,000 cattle operations (2008), with 7,845 feedlots (2007).

What is a Feedlot?

A feedlot is used in large-scale factory farming. Large beef feedlots are called Concentrated Animal Feeding Operations (CAFOs). Typically thousands of cattle are kept in pens and fed. Before they arrive at a feedlot cattle graze on range land. Once they reach 650 pounds, they are transferred to a feedlot. They receive a specialized diet which is made up of 95% grain. It is also here that they receive their antibiotics.The EPA has the authority to regulate these uses Under the Clean Water Act. In some cases this authority is given to the states. Large amounts of waste can enter the water supply, if the waste is not handled properly.

Iowa Gov. Terry Branstad requested on April 2, 2012 that Congress hold a hearing to investigate how the processed beef product - lean, finely textured beef - became known as pink slime. Branstad characterized it as a smear campaign against a legal and safe product.

According to the Kansas Beef Council cattle generated $5.55 Billion dollars (2009) in receipts. Kansas companies that produce, process and distribute beef employ 19,240 people. Another 51,210 jobs exist to support the beef industry. Kansas ranked 3rd among all the US states in red meat production. The state ranked 4th in the export of live animals and meat exported internationally - with a value of $672 million.

Richard Wortham, The executive vice president of the Texas Beef Council, told the Austin Statesman, that taking away the beef product (pink slime) effectively removes 10 to 12 pounds of 100 percent lean beef off each animal. This will drive up beef costs.

During the 2011 winter, Texas cattle herds faced a disastrous drought. During 2011 approximately 600,000 cattle were lost. Not since the Great Depression was there such a loss. So Texas cattle ranchers, just starting to rebuild their herds, have been hit by another potential loss.

You've written a great article. The industry figures are mind-boggling, and then there's the politics. I also listened to Jamie talk about pink slime, so thanks for that too. Isn't it amazing that USDA doesn't require listing of ammonia because they consider it a process rather than an ingredient? I watched Jamie on a similar topic, chicken trimmings that go into a processed paste and end up making nuggets or other fast food products -- he was shocked to see that even after his demonstration of what goes in them, the kids said they would still eat the stuff!

Yet another example of the media practicing on the naiveté of average people. Whether it truly is ignorance, or just blatant hypocrisy I'll leave for others to decide, but either way it's more than a little disheartening.

While I think Gov. Branstad was wrong to go so far as assigning motive to the media's report, I will agree that it was, at best, irresponsible and at worst, over-sensationalized "tabloid journalism" on the part of the media.

Hi terrilorah, The other choice is to support small farms and cattle producers that practice sustainable agriculture. You can also choose to buy beef and meet products with no fillers or additives. They usually cost more and that's the choice we all have to make.

Chrisbyron1 is correct, this is very frightening! It's no wonder people used to live off the land.....we need to go back to that if only there was time.

You're very welcome. Nice to meet you Chrisbyron1!

This is truly frightening. Thanks for the info! 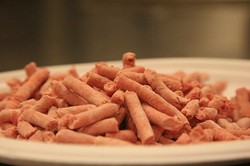