Traditionally, Thoroughbred race horses were just chestnut, bay, grey or black. But coloured Thoroughbreds are becoming more popular, and nothing is more colourful than pinto!

For hundreds of years, the racing world was in complete denial regarding unusual colours like pure white, palomino, and buckskin. Palominos were registered as chestnut, and buckskins as bay. Whites were a big problem that actually led to a change in the list of colours on the registration forms so that they could be correctly recorded. But pinto? Whoever heard of a pinto Thoroughbred?

What is a Pinto?

First, the pinto colour patterns need explaining. One genetic pattern is tobiano, usually described as white with a dark head (with the usual white markings, like a star or stripe sometimes present), white legs, and dark patches on the body. The gene for tobiano is not present in modern Thoroughbreds.

The splash white pinto pattern has been identified in Thoroughbreds, but it is extremely rare in the breed. Think of a dark-coloured horse walking with its head down through a river of white paint. The white starts on the belly and legs and works upward, and the white often looks like it has been applied using a roller to make the edges nice and straight. The bottom of the tail is often white. Splash whites tend to have blue eyes. There are no racing Thoroughbreds with this pattern to date.

Overo, often called frame overo, is somewhat rare but definitely found in Thoroughbreds. Usually, the body is dark, with or without the usual white markings on the legs, but the head has a lot of extra white (baldface or apron-faced). The white spots usually are on the sides on the horse and usually the white does not cross the back, and usually the tail is all one colour. One or both eyes may be blue. There have been a few horses on the racetrack with the frame overo pattern.

The most common pinto pattern in Thoroughbreds is sabino. Sabino dates back to the earliest days of the Thoroughbred breed, possibly inherited from Arabian ancestors. It is still found in modern Arabian horses. There are four indicators of sabino. First is white on the horse's chin. A leg marking with a “spear” of white pointing upward, instead of a uniformly shaped sock, is another sign that sabino is at work. Another indicator is white on at least one leg that goes over the knees or hocks. A white spot on the belly is a definite sign of sabino. Most sabinos have at least two of these indicators, and some have all four. An extreme sabino may be nearly all white, with only a bit of colour left on the head and maybe in the tail. A sabino may have white hair mixed into the main coat colour (called rabicano roan or ticking), and the edges where the white and coloured hairs meet may be roaned as well. Pinto patterns can be combined too, so you can have a horse that has the genes for both sabino and overo.

Before these patterns were well understood, many pinto Thoroughbreds were not recognized as being pinto. The famous sire Northern Dancer was sabino, and he passed it on to his descendants with incredible regularity.

One of the first stallions used to help create the Thoroughbred was a sabino chestnut called Grosvenor's Arabian, pictured at the top of the page. Although he sired several good runners, his bloodline has not survived to the present day.

Animal painter Dean Wolstenholme (1757-1837) painted a portrait of a wildly-marked chestnut sabino racehorse. There is another painting variously identified as King George III's Racehorses and as King of Trumps showing a pinto stallion, but the artist is unidentified.

Volume One of the General Stud Book in Great Britain, where British Thoroughbreds are recorded, includes the color "pyebald" (black and white pinto) for several entries, including Rantipole (1769, by Blank – Joan, by Regulus). Diomed, winner of the first Epsom Derby in 1780, was a sabino. So was the 1764 colt Eclipse, from whom most Thoroughbreds today are descended.

A chestnut Thoroughbred mare named Spot (by Hamptons Twigg x Bedford Mare) was born in the United States in the early 1800s. She was named for the white spot on her side. Her great-grandsire was an American-born stallion named Harlequin, born in 1800. His name suggests that he was pinto. Blair Athol, born in 1861 in England, was a top racehorse and sire in his day. His wide, oddly shaped blaze combined with three dark legs and one small sock suggested he was a minimally marked overo.

Master Magpie, registered as chestnut, was born in Great Britain in 1905. His photo clearly shows him to be a sabino, complete with white spots on his hind legs and a splash of white coming up from his belly. This horse was not raced and became an important sire of warmbloods at the famous Trakehner State Stud in Prussia. Many spotted Trakehner horses descended from him, but the record only shows two Thoroughbred offspring, both fillies born in 1912, and his Thoroughbred bloodline ended around 2001 after producing no successful racehorses.

Overo Pintos On the Race Track

Frame overo Thoroughbreds are rare and to date are found in only three bloodlines. Most of them end up in sporthorse breeding programs, but a few have raced. The 1991 bay frame overo Tri Chrome made two starts, getting a win and a third, before being kicked in the paddock before a race and having to be euthantized. He was by Blue Ghazi, who also sired Blue Eyed Streaker, another frame overo born in 1993. Blue Eyed Streaker made 25 starts but was not successful on the track, earning under $1,400. He found better success as a sire of coloured Thoroughbred sport horses.

Modern Society, bred in Great Britain, raced twice at age two in 2012 in England. This bay overo is by an unraced American frame overo stallion named I Was Framed, who is by another unraced overo named Racey Remarque (who died young in a paddock accident) and out of the sabino/overo American mare Dance Spot. Dance Spot made 28 starts, more than any other overo Thoroughbred. She had a record of 2-6-3 and earned just over $47,000. The only other overo Thoroughbred to race in Britain as of 2012 is Join the Dots, a 2007 gelding by I Was Framed. He failed to win in two starts.

Ellusive Quest, one of the most colourful of the pinto Thoroughbreds to race, only made two starts, making $970. He is a full brother to the ill-fated Racey Remarque mentioned above. Ellusive Quest has had a couple of his offspring reach the racetrack but, like the other overo Thoroughbreds, they made little impact except amongst the spectators. His frame overo son Ellusive Spell, born in 2006, caused a sensation at Assiniboia Downs in Winnipeg, Manitoba, Canada, becoming an immediate fan favourite for his dark bay and white pinto coat. The blue-eyed beauty was the first overo Thoroughbred to race in Canada, but he failed to finish in the money in two starts.

There are always exceptions. Candy Spots, an oddly-marked chestnut overo foaled in the USA in 1960, won 12 of his 22 starts, including the Preakness Stakes. He was also second in the Belmont Stakes. He had modest success as a sire of runners. Naevus, a minimally marked overo born in 1980, won twice in eight starts and was first (but placed second), second and third in three graded stakes. Many of his foals were unraced and used as sport horses instead, but some did quite well on the track. However, his best son, millionaire King Glorious, was a solid dark bay with no visible white.

To date, except for Candy Spots and Naevus, all of the successful pinto race horses are sabino, a very common pattern in Thoroughbreds. Most are minimal sabino like the famous sire Northern Dancer and are identified as sabino only by the white chin spot and dagger-shaped white socks. Some have a small white patch on the belly. Others are a little more obvious in their colouring.

Marquetry, a chestnut with white splotches on his legs, was born in 1987 and made nearly $3-million on the track. He sired million dollar winner Artax and many other stakes winners. Borrego, foaled in 2001, is another sabino with a blaze, chin spot, three high socks and a little patch on his belly. He won over $2-million. The 1960 Hungarian stallion, Imperial, had 20 wins in 25 starts, many of them in stakes races. Irish-bred Ivory Tower, who had a white patch on his belly, won stakes in East and West Germany and Sweden in the early 1960s.

Canadian-bred The Minstrel, one of the greatest sabino racehorses, was a son of Northern Dancer 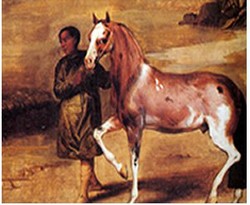