Earth once had a twin, and life on Earth might not exist without it. Learn why this long-lost "Planet X" is so important to us today.

About 4.5 billion years ago, Planet Earth had a very rough day.

A Mars-sized planet, Theia, collided with it and reshaped Earth from the inside out. The very skies of our planet were altered profoundly by this epic collision.

Fast forward a billion years, and we're still living with the benefits of that ancient cataclysm.

How Do We Know Theia Exists?

It's over our heads and under our feet

The Moon is very odd: it's larger than Mercury, and it's so close to Earth that many astronomers have characterized the Moon and Earth as a two-planet system. The Moon also exerts tremendous influence on its planet, far more than is normal for a satellite (see below).

As scientists have studied the Moon more closely, its gravitational tug and the rocks brought back by Apollo have yielded two other important clues: the Moon's iron core is unusually tiny for its size, and its rocks are surprisingly identical to the Earth's crust.  Meteors from anywhere else in the solar system have different chemical signatures. It appears as if the Moon "budded off" from Earth like a lobe of clay pinched off from a larger piece, except for one thing: it's missing the heavier elements of the Earth's interior.

Meanwhile, Earth itself is odd. It has an unusually large metal core for its size. In fact, its nickel-iron core is the size of the planet Mars.

Something bizarre happened in our neighborhood to cause all this. Scientists and physicists have run the tests, and can't come up with any physical way for the Moon to "pinch off" through the Earth's own motions... it doesn't work.

Simulations show that the only physical way to get our Earth and Moon is if a Mars-sized planet struck Earth at an angle, peeling off a large chunk of crust and throwing it into space. That formed the moon. The remains of Theia sank into the Earth's depths, doubling its metallic core.

This is the Giant Impact theory, the most accepted theory in science to explain the Moon's formation. We have five reasons to be thankful for that mega-impact.

Great Book on the Giant Impact

and why Earth is a very special place

I've seen this on discovery a few years back and looking at it was amazing! It was done so well, and this is the only logical explanation of the Earth + Moon.

Actually, there were many huge, more recent floods at the end of the last Ice Age - -the filling of the Black Sea, the bursting of one of the Great Lakes which carved out New York City's harbor, the Missoula Floods through the middle of North America, and many others. I suspect some of those may have contributed to flood legends worldwide. :)

Wow! Fascinating. Could all that water have anything to do with the legend of the flood that is so universal?

Amazing Videos: Stuff Launched into (Near) Space with Weather ...

Lots of amateurs are attaching cameras (or even iPhones) to weather balloons ...

How often do you get to see a space shuttle so close that the wing is almost over your head? Here's my great photos of Endeavour arriving at the California Science Center.
26%  0   4 Greekgeek
Space Technology 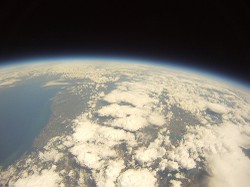 Amazing Videos: Stuff Launched into (Near) Space with Weather Balloons

Lots of amateurs are attaching cameras (or even iPhones) to weather balloons and launching oddball objects into space to make amazing videos like these.
Loading ...
Error!