A look at the art and history of an inn sign in my home city, Manchester.

My personal obsession with pub sign photography started by accident in about 2013. I hadn’t used a camera for some years leading up to then because my Mum used to bore me with endless conversations based on family photos.

When my step-father died, my Mum gave me his digital camera, which I decided to put to some use. My first thought was to take lots of photos based on my writings. I could illustrate my poems, blogs and other work, just as I am doing here.

The roots of my love of pub signs

One of my earliest published poems concerned a writer called Ben Brierley and I created a rhyme referring to his portrait on a very local pub sign located within a few minutes walking distance to my house. I decided the next time I walked past there I would snap a photo of the sign.

Alas, I was too late. The pub had closed down days before and its sign had been removed. I then noticed that the pub directly across the street had met the same fate.

A few days later I was in Manchester city centre with my camera, and saw the pub sign for The Piccadilly. Not only was it the first inn-sign I snapped, it instantly made me realize that such works of art deserve saving and careful cataloguing.

Far from traditional, the sign is actually quite modern, and portrays the three ages of tram-travel in the city. A horse drawn tram car stands alongside an Edwardian tram of the golden age and the ultra-modern Metrolink tram that has operated since around the Millennium. It looks as if the trams are on the starting line for a race.

The sign was picked out by the Inn-Sign Society (a 300 member organized group of inn-sign fans like myself) as a sign of the year right before The Piccadilly changed ownership. The pub was renamed The Piccadilly Tavern, and its sign was replaced with a perfectly good portrait of a team train, reflecting he pub’s proximity to Manchester’s Piccadilly Railway Station. To confuse matters there is another pub closer to the station called The Piccadilly Tap, though to date it has no inn-sign at all.

My collection is growing, but this is a special sign for me – I guess we always will love our first more than most. I hope to share more of my inn-sign images with you soon.

Thanks Veronica, much appreciated

An interesting piece and welcome to Wizzley Arthur. 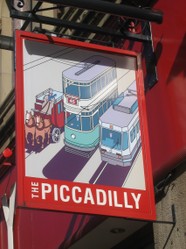