Besides the song Wreck of the Edmund Fitzgerald, there's so much more about the shipwreck that happened in a brutal November storm.

The Wreck of the Edmund Fitzgerald. It's more than just a hauntingly captivating song. It was a real event that took real lives, 29 of them.

The date was November 10, 1975, and the place was on Lake Superior. She wasn't supposed to sink. None of them ever are. But sink she did, in a matter of moments, taking all aboard with her.

Today, the ship that was something of a queen of the waterways she plied lies at the bottom of the lake. Her resting place is a legally designated watery grave. As such, it will remain undisturbed, out of respect for the remains of those who went down with her.

She's probably the most famous, and certainly the largest, ship ever to succumb to the sometimes treacherous waters of the Great Lakes of North America.

Most everyone probably knows the song about her. But there are other things to know. Some of them are here on this page.

Built to Order, Built to Please 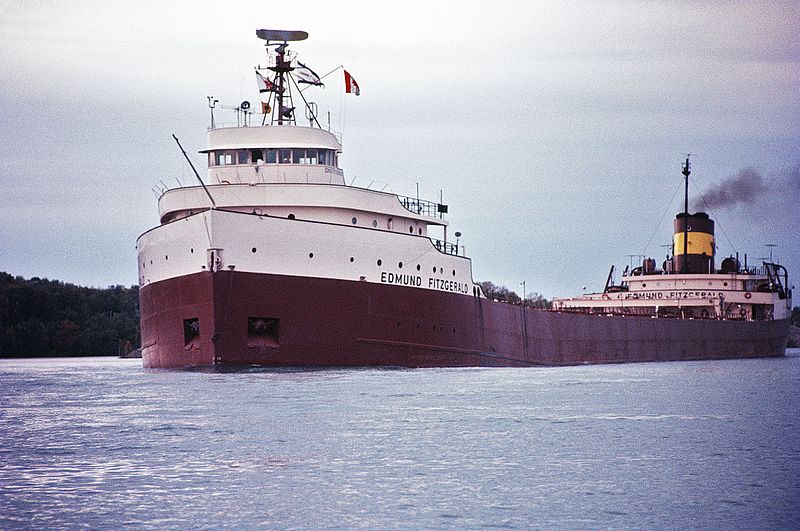 The ship was a bit of a grand lady among her peers on the Great Lakes.

Built to order by the Great Lakes Engineering Works for the Northwestern Mutual Life Insurance Company, she boasted several firsts and some luxuries not usually associated with lake freighters.  Some of them included:

As a carrier of iron ore, the SS Edmund Fitzgerald soon set a record for amount of ore hauled in a single season. Then, she beat her own record, holding the 'seasonal record' an astonishing six times in her seventeen years afloat. Those feats were no doubt what earned her the nickname "Toledo Express."

The Wreck of the Edmund Fitzgerald by Gordon Lightfoot

Listen to the Song as You Read More About Big Fitz

The Launch of Big Fitz

Begun in August of the previous year, she was named after the president of the Northwestern Mutual Life Insurance Company, Mr. Edmund Fitzgerald. Thousands attended the christening on June 7, 1958.  Perhaps Fitzgerald's wife, Elizabeth, should have put in a bit of practice beforehand.  It took her three swings at the bow to break the champagne bottle.  (Some mariners consider problems with the christening to portend bad luck for the vessel)

The actual launch following the christening wasn't exactly immediate.  There were problems releasing the blocks holding the keel in place. When they were finally released a half hour later, the ship crashed into a pier upon entering the water.

Did these troubles in this grand ceremony foreshadow the tragic end of the great carrier some seventeen years later?

Watch a the Launch Video

Filmed by a TV Station

Nicknames for The Edmund Fitzgerald

People Were Really Fond of Her

People were genuinely fond this steamer - even those who only stood on the banks and watched her sail by. Nicknames often grow out of such fondness.  Here are some of the ones that did:

The Sinking of the Edmund Fitzgerald

A Freighter Captain Who Was There That Night

Captain of the Arthur M. Anderson, Bernie Cooper, tells about the night the Fitzgerald Sank.  He was there... or very close by.  The Fitz had been following the Anderson through the gathering storm.

Time passed, the gale was upgraded to a storm.  Ernest McSorley, Big Fitz's last captain, took his quicker vessel ahead of the Anderson. But the two men were in sporadic radio contact.  McSorley lost his instrumentation, and slowed to close the gap between the two ships so that Cooper could keep him on radar.

In the afternoon, ships in the area received a warning to seek safe harbor. The  Anderson began radioing directions to Whitefish Bay, their nearest point of safety.

Winds gusted to hurricane force.  Twenty five foot  waves crashed over the decks of the ships.  They were both in great peril.

Fitzgerald already had a 'bad starboard list.'  Just after 7 pm, Cooper asked how they were doing.  McSorley's reply of "We are holding our own," was the last transmission he ever made.  Minutes later, the ship was simply gone.  Just... completely gone.

The following video is the story from Captain Cooper himself, told in one of the last interviews he ever gave.

The Ship and Her Crew

On one of the expeditions to the shipwreck, the ship's bell was recovered. It's been restored, and is now on display at the Great Lakes Shipwreck Museum in Michigan. In a ceremony there held on each anniversary of the shipwreck, the bell rings out in honor of those sleeping in their watery grave.

To honor the 29 lost in 1975, the original bell has been replaced on the shipwreck with a replica. That new one was especially made for the purpose, and has the names of each of the lost crew members engraved on it.

I had planned to list the names of the crew members here, along with their positions and home states, but then I found someone who does a far better job of that than I would have. At S.S. Edmund Fitzgerald Online, you'll find not only crew names, but profiles, too. There's a whole lot more to explore there, including the story of the bell you see pictured above, but that crew information is a good place to start.

You'll also discover an amazing example of dedication to a task. The young man who runs the site has spent over half his life developing it, and he's not yet even thirty years old! It began as an outgrowth of a school assignment when the young man was a boy of ten. It grew from there, and earned the respect and support of a number of family members of some of the men lost in the tragic sinking.

Song of the Bell

The Split Rock Light Shines Just One Day a Year

In Honor of Those Lost in the Shipwreck

The beautifully scenic Split Rock Lighthouse has been inactive  for over forty years.  Its light is officially extinguished.  Still, after all these years, that beacon is lit just once each year, and shines again on a special day.

It shines that one day in honor of the 29 souls who perished on the Mighty Fitz.

On November 10, a ceremony is help to remember the wreck of the Edmund Fitzgerald.  While the lighthouse is open (from noon to 6 pm) that day, there is a special closing at 4:30, when a ship's bell begins tolling, and the names of the lost crewmen are read.  Then, the revolving beacon is lit again for them. At the end of the day, the beacon sleeps again for another year, just as the earthly remains of the twenty-nine still sleep at the dark, cold bottom of Lake Superior.

The  Split Rock lighthouse, in Two Harbors, Minnesota is a national historic landmark.

At The Dossin Great Lakes Museum

There, you can attend the annual Lost Mariners Remembrance on the 10th of November.

The program includes a lantern vigil at the anchor.

Advance registration is required, as there is limited seating for the two hour program.  (See website for details.) 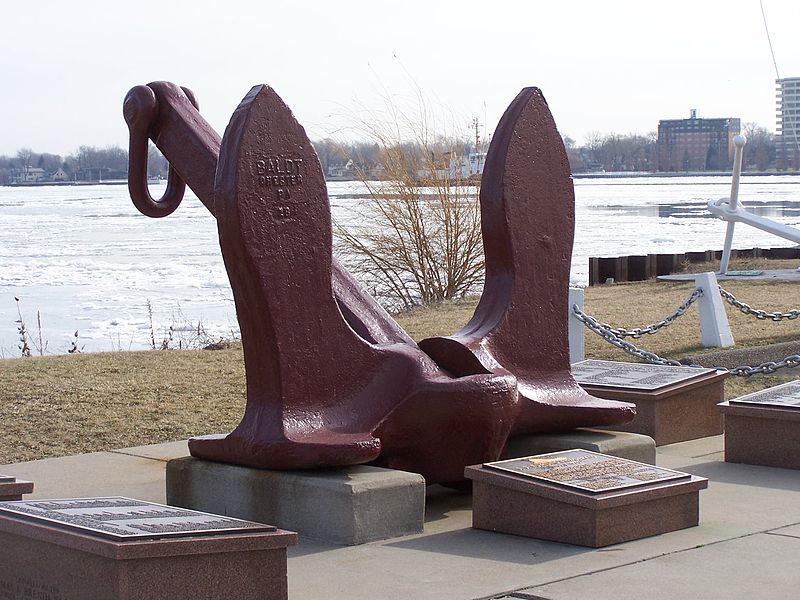 Many Lives Have Been Lost at Sea

And We Remember Them

Over the years in the lifetimes of those who've landed on this page, many lives have been lost at Sea.  Most recently, the tragic wreck of the Costa Concordia was one of the worst maritime disasters in modern history.  On January 13, 2012, she ran aground off the Isle of Giglio, resulting in 34 fatalities (two of whom are still missing and presumed dead.)

We all feel for those lost at sea, even if they were strangers to us.

The ceremonies are often very touching, and give attendees a sense of connection with the sea and the souls of those who've gone before them.

If you live any near a coastal community, chances are there is a memorial to those whose lives were claimed by the  might of the ocean at some time during a given year.

Have You Been to a Mariner's Memorial?

Including The Wreck of the Edmund Fitzgerald

Your Thoughts about The Edmund Fitzgerald, or other Sea Tragedies

Nice job on this piece of sea-faring history, CruiseReady! I can remember when this tragedy took place, particularly because it was the same year my son was born, and events that occur during your own special times are not forgotten. I liked the way you included information on the various "lost at sea" memorials that are regularly held worldwide.

I thought this ship sunk back in the 1800s, so I learned a lot by reading this article. Now I know the real story behind the song.

Thank you - there may be more in the future.

I like the valuable information you provide in your articles. I will bookmark your blog and check again here frequently. I"m quite certain I will learn many new stuff right here! Best of luck for the next! Thank you for share.

wow its good one to see this kind of information.

Thanks for sharing. I hope it will be helpful for too many people that are searching for this topic.

Glad to hear it!

If any one man can arguably be responsible for the scale of the Holocaust, it was Rudolf Höss. Today his grandson Rainer speaks to Wizzley about his work and the family legacy.
100%  28   9 JoHarrington
Modern History 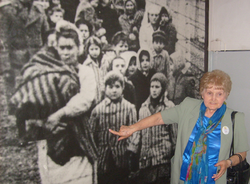 Eva Mozes Kor and her twin sister Miriam survived the Holocaust, because Dr Mengele needed them for medical experiments. Today she is speaking with Wizzley.
Loading ...
Error!