Robert H. Schuller and the Fall of Positive Thinking 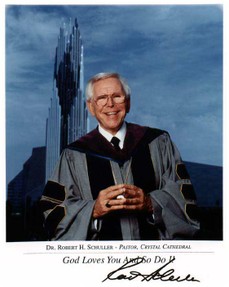 If Robert H. Schuller and the folks at the Crystal Cathedral in Orange County, California can't make positive thinking work for them - then what hope do the rest of us have?

In October 2010, about $50 million in debt, the Crystal Cathedral filed for Chapter 11 bankruptcy protection. On November 17, a bankruptcy judge determined that the Crystal Cathedral would be sold to the Catholic Church. This is the end of a saga that included a lawsuit filed by a committee of 400 creditors alleging an even blacker picture with the Schuller family pulling out $10 million from the Crystal Cathedral Endowment Fund between 2002 to 2009. Why? Because the First Family of Positive Thinking was experiencing financial hardship and needed the money.

This fall from grace is hard for many to accept given the long-lived success story of the Crystal Cathredal ministries. Schuller was sent to California by the legendary Norman Vincent Peale, the Father of Positive thinking to start a church in the 1950s. He had $500 and his wife Arvella. The Orange Drive-in Theater was the only place available for him to hold his services. So he stood on the roof of the concession stand and preached his services. His motto was "come as you are in the family car.

Schuller actually transformed Positive Thinking into Possibility Thinking. He encouraged people to believe in themselves and to take action. He always came up with pithy sayings like Tough Times Never Last Tough People Do.

If I've given the impression that I'm against Schuller or the practice of Positive Thinking, I'm not. I used to get up every Sunday morning and watch Schuller's The Hour of Power Broadcast. I own and have read every book Schuller ever wrote and I've worn out several copies of Norman Vincent Peale's The Power of Positive Thinking. When I'm having a very bad day, I watch some of his sermons on You Tube.

The failure of the Crystal Cathedral to continue to thrive has left me a bit depressed and wondering about my own choice of beliefs. So I had to think hard about what I've observed of the Schuller family over the past decade. When I was honest with myself, I realized that I left them several years ago in spirit - and I wasn't the only one.

Robert H. Schuller's ministry can be characterized as a Propserity Church or Health and Wealth ministry - most of the sermons are about praying youreslf healthy or wealthy. The positive Bible versus that are chosen are always focused on those items. It's been claimed that the Crystal Cathedral ministry was hard hit by economic times and donations dried up. But there seems to be a lot of money to be given to mega Churces. All you have to do is take a look at Joel Osteen (and yes I do watch him as well) and his current success.

In some sense I think Schuller did get lucky by building his church in one of the fastest growing and riches areas of the country. He expanded his church against the backdrop of a vibrant economy.

Schuller Became Bored with Us.

I really started to get the impression that Schuller stopped caring about the little guy sitting in the pews, hoping for the inspiration to jumpstart their life. Even in the Tough Times video that I selected that was preached in the 1980s, you start to see evidence of that.

Every sermon started to be tinged with comments showing the greatness of Schuller himself - the fact that he was awarded an honorary degree, that he was asked to speak in front of thousands of people, or that his church was copied by a South Korean minister that he had helped train. Later he would go on and on about his meetings with the US President, the Russian President or Middle East meetings. He would be gone from the pulpit for weeks setting up his international programs.

Yes, I wanted the person preaching to me about Positive Thinking and success to be succesful. But it got to be so boring listening to the sermons about Middle Eastern politics. That's not what I tuned in for - and I did stop tuning in.

When I heard that Robert A. Schuller, his son, had been named Senior Paster, I tuned in again. This Schuller was more into Possibility Living and had a Twelve-Step tinge to his preaching. Definitely not me and I tuned out again. Then I heard Shelia Schuller Coleman had replaced her brother as Senior Paster and tuned in again to find fundamentalist praise music and I was gone for good.

Find a Minister Who Believes in What Their Church Stands for

I couldn't believe my ears when I listened to the fundamentalist preaching. I also heard that Coleman had banned gay members of the choir. That was not the Positive Christianity that I believed in. Then as I thought more, I realized that the problem was the church board was more interested in the Schuller name than their religious message.

If the church board had had the moral courage to find a dynamic preacher who truly believed in Positve Thinking, Possibility Thinking or Positive Christianity, whatever the label, I think the Crystal Cathedral Miinistries would have continued to thrive. It was the obsession with the Schuller name and Schullers that didn't fit their church that caused the problem.

On November 17, 2011 a bankruptcy judge determined that the Crystal Cathedral will be sold to the Catholic Church for $57.5 million. It was a truly gutwrenching day for many long-time Crystal Cathedral members. But in the end even he 85-year-old Reverand Robert H. Schuller agreed that it was best. Telling the judge in a letter that her preferred the Catholic Church using it as a cathedral to Chapman University using it for non-religious functions.

But is the sale of a Cathedral the end of the Crystal Cathedral Ministries? Is the Schuller family so tied to the physical landscape that it can't find a postive outlook anywhere. It will be interesting to watch how the Schullers respond to this.

Schuller's church failed because it wasn't Christ's church. Possibility Thinking is just the same old lie of Satan, a quasi-Christian adaptation of the belief that we are all little gods and can have whatever we want, if we will it. I encourage you to pick up God's Word and read it. You will find that the message of scripture is not the gospel according to Norman Vincent Peale, and it will give you far more satisfaction.

I have been going to the Crystal Cathedral for 22 years. The financial problems that have developed over the years has been due to the new building we built to accommodate the large number of visitors and the need for other new ministries being developed in the church. We started with enough pledges to pay for the building, but slowly the people and companies failed to honor them. The stress of financial decline caused the Board of Directors to divide on ways to solve the problem. Plus the recession hit us hard, just like it did to everybody else.

The Robert Schuller I know has given all of the proceeds from his books (100%) to the Crystal Cathedral, plus more from his salary and gifts given to him. He has given millions of dollars to the church that he spent his life building. He has sold his own family home, and other personal property to help keep employees who needed their job. So please understand that the new building is the bad guy, not Robert Schuller. The press only prints what will create a sensational story, They do not know what is really happening. God is still with Robert Schuller, and He did not bring him this far to drop him. We believe that it is God's church, and He will rebuild it. As soon as God reveals His plan to us, we will let everybody know. Meanwhile here is one of Robert Schuller's famous quotes. "Failure doesn't mean you are a failure... it just means you haven't succeeded yet." We still think and pray positive.

Hi Bizilady! I agree with that. I love Joel Osteen's sense of humor as well. The jokes he begins his show with are a little hokey at times, but they do make me laugh.

Positive sermons are lacking in most churches and why i avoid them now.
i sometimes watch Joel Osteen because he's so positive.

Interesting. I'm an atheist Brit and hadn't heard of him before.

I agree Petunia that it is very sad. When I read his books now I do try and learn from Schuller's mistakes as much as his inspiration. I think that I should be able to do this without leaning on others. But then I remember that we are a connected species and do need each other.

How incredibly sad! I did not know about all of this, but for years, I read Robert Schuller's books and leaned on them. I think you are most likely right - sometimes these very popular ministries get all tangled up in themselves and forget their original message. I hope you and I both can hold on to the good things we learned and move on. 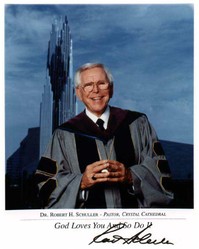