Romantic Our First Christmas Together Ornaments

Did you marry your true love this year? Celebrate your first Christmas together with these festive holiday ornaments.

It's the Holidays. It's cold outside, and the snow is gently falling. But things are a little warmer this year because you're celebrating it with your soul mate.

It's been a year of firsts: your first dinner party as a married couple, the first tradition you made as a family, and your first fight.

And now it's your first Christmas. There's the thrill of selecting the perfect tree and bringing it back to your home to place it in that perfect spot the two of you decided on together. You've bought everything that's needed to make this Christmas tree special.

But as you hang your ornaments one by one on your tree together, make sure the first ornament you hang is one that's dedicated to the two of you and will be something the both of you will treasure forever.

Why are couples called lovebirds anyway?

I've always thought it a bit odd that couples deeply in love with each other are called lovebirds. Is it because we as couples act like the tropical lovebirds, or is it something more?

Ever the Googler, I went in search of an answer. It turns out the answer is found deep in the Middle Ages.

The idea of comparing doe-eyed humans to foul isn't a new one. It seems Chaucer wrote a poem in the 14th century called "Parliament of Fowls" where he likened the mating rituals of humans to those of birds. He wrote, “For this was on St. Valentine's Day, when every bird cometh there to choose his mate"

Later on in English literary history, the 16th Century to be exact, another writer named John Lyly spoke of lovebirds "whose feathers shall be beaten gold" in a popular play at the time.

You would think a word which was common in the Middle Ages would have fallen out of usage over the course of a few hundred years. However, it surfaced again, this time in an 1858 issue of Harper's Magazine.

Whatever its origins, It's an odd term, that's for sure. But there's not a word in the English language that would be more appropriate. The two of you, nuzzled up next to each other gazing at your first Christmas tree, there's really no better way to describe the two of you, is there?

Because you want to remember.

For an ornament to become a treasured keepsake, it has to stand out. Not because it's flashy or expensive, but because it takes you back in time. It makes you remember.

A personalized ornament is the perfect way to capture a moment the two of you shared. Maybe it was a photo of your wedding, maybe it was when you were both being goofy, or maybe it was that pic one of you snapped on that awkward first date.

Whatever the moment, your personalized Christmas tree decoration takes you back to that particular time and place. It's a place where the only people that were important in the world were the two of you.

Be warned, though, and choose your picture wisely. To the two of you, you're smiling lovingly at each other. In 20 years your kids will want that ornament to be hidden at the back of the tree so their friends can't see how gross their parents were.

But if you're going to embarrass your future children, there's no easier way to do it than with Zazzle.

Each of these ornaments can be completely personalized by replacing the photo with your favorite picture of the two of you. Your names, date of marriage, or any text you want to use can be added to your keepsake ornament at no extra cost.

Our First Christmas Ornaments for 2014:

Because even Frosty wants to snuggle.

Looks can be deceiving. Snowmen (and snowwomen) are cold and wet on the outside, but once you get to know them, they open their warm heart up to you.

Maybe it was that way when the two of you first met. On your first interaction, one of you may have been cold and standoffish because of a past broken heart. Persistence paid off, though, and their true heart emerged once the ice around it had been broken.

If you want to get fully into the Holiday spirit, there's no better way to do it than memorializing the two of you as the perfect snow couple.

Personally, I love snow people. They're cute and fluffy and you can't help but want to rub noses with them.

And that's what the two of you want to do when it's warm and delightful inside but frightful outside: sit and snuggle.

Do you and your snowbaby have your own ornament?

That's funny! We haven't been called that yet. I guess we're not the lovebird type. lol

When we were engaged, people around us started calling us the Looney Lovebirds.

They are cute, aren't they! I think they'e my favorites.

I like the snowman ones best! Great idea for couples.

It's very special to be sure. Thank you for reading!

This is such a beautiful and romantic idea of having the first Christmas together and decorating it with such ornaments. The first encounter, first love and first success - they are all so beautiful that you want to remember and cherish those moments again and again.

Add a bit of elegance to your Christmas tree this year with these beautiful a... 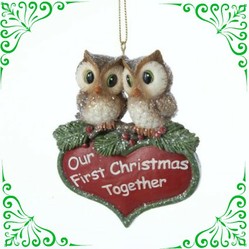 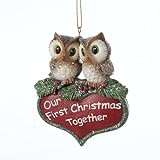 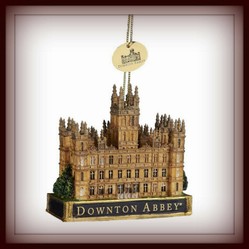 Add a bit of elegance to your Christmas tree this year with these beautiful and unique ornaments that pay tribute to all of your Downton Abbey favorites.
100%  15   9 AbbyFitz
Christmas Decorations