Rushbearing at Grasmere in the English Lake District

Rushbearing at Grasmere is based at St Oswald's Church and is a very old custom. The ceremony is an annual event. Pagan origins or recent charming custom?

The old custom of rushbearing dates back to when rushes were picked and strewn across the floors of a church to cover the earth floor but now even though the floors are tiled or made of stone, in the English Lake District the custom survives.

At Ambleside the children process through the village on the Saturday nearest to the Visitation of Mary feast day on July 2nd.

In Grasmere the ceremony takes place on a Saturday near St Oswald's Day on August 5th. I was very lucky to be there one year at Rushbearing time.

The church entrance is decorated with rushes.

You can see the rushes on the floor in the porch.

The custom was first recorded in 1680, when there is a record of a shilling being given for ale for those who brought rushes and repaired the church. So maybe, it was an annual church maintenance event!

People of Grasmere  decorate the inside and entrances in St Oswald's Church Grasmere with sheaves of reeds, rushes and flowers.

While the procession round the village takes place, the floors of the church are covered in rushes . A church service and gingerbread afternoon tea are held afterwards.

The rushes remain in place for a week.

I suppose the origins of this are pagan but if they were they aren't now. The event is symbolic now . The rushes are carried on a sheet, held by six  Rush Maidens who are dressed in green.  A young man with a  yellow cross leads the procession. Other rushes are made into shapes and called bearings and carried to church. Shapes for the rushbearings include harps, crosses, maypoles and St Oswald's crown. Some of these shapes can be seen below in the church pictures.

So much hard work goes into this event.

The aisle is literally covered with rushes.

To the right you can see a traditional harp shaped rushbearing as mentioned above.

How beautiful is that!

Regardless of what the custom may have been based on originally, it is now a charming custom and a tourist attraction.

Each year Grasmere attracts many visitors but especially at  The Rushbearing time.

Laying down rushes is an old tradition. The rushes were changed at the end of the season. They would have been quite dirty and not too loud to walk upon

Veronica, Do people who like old ways still use reed-covered floors and thatched roofs anywhere in U.K.? The harp looks very springtime festive with flowers and rushes! How often would rushes centuries ago have to be changed on great house floors? Would they make any noise when people walk on them?

TY . I know it sounds obvious but it's all so .... NATURAL .... and I think it is the natural look which makes it so effective and stunning.

It is worth a visit that's for sure.

I had never heard of that tradition before. How wonderful! I'd love to see the churches decorated that way.

I think that this custom tends to be in North West England and was maybe hijacked from an old Celtic festival.

You are right that the use of reeds and rushes gives it a lovely, natural aspect. You use the word enchanting and I agree. Walking around all that natural decoration in church is indeed enchanting.

The community are very skilful indeed.

I haven't got to see rushes inside the Church, perhaps it is because the old traditions are maintained in the original locations. It definitely gives the Church a rustic and enchanting look. The decorations with rushes look livelier and environment friendly.

As an aside to this, Grasmere is famous for its Gingerbread. It is a large concern there and this is why it is traditional to the event.

It is a lovely occasion for sure. While I was there I could certainly see the two old cultures linked. The maidens in green, following the "yellow male", the rushes- earth. nature and possibly phallic. Some of the rushbearings are formed into a maypole, also phallic symbols. I also felt the girls in green were reminiscent of fertility rites.

But then the lovely cross, the church, the cross rushbearings. It seemed to be a great meeting of 2 old cultures. I think the celebrating of St Oswald link, removes it from any pagan calendar events timewise.

Strewing was traditional right through the Middle Ages, when the rushes or herbs would be strewn in houses or churches as a kind of carpet. Up to the Tudor period the parishioners would be responsible for maintaining the church, and what undermined this tradition was the strain on parishes caused by the Reformation, when there was so much change that people could not cope any longer. It seems that these churches in Cumbria maintained something of the ancient tradition.

Having green clad girls as rush maidens suggests fertility rites, but having checked the sacred year of paganism, I cannot find a pagan feast that corresponds with July 2cnd. However, that it is close to a feast of Mary indicates reminds us that some of the Marian cultus was inherited from the cultus of the goddess, so there might be a pagan origin to the festival. The yellow clad man is something of a mystery, but yellow is the colour of the sun, so this might explain the origins of this colour's use in the festival: green for earth and yellow for sun. The archetypal symbols are clear, as feminine is in Jungian symbolism always earth [green] while masculine is sky and light, [yellow].

You are right. I think that there has been a too slow realisation though. Since starting my history business and doing my workshops I have noticed a resurgence in interest. People are far more interested in customs, traditions and history than they were.

I think knowing about these customs helps us to understand who we are today. 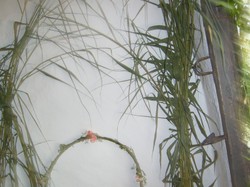