A comment on my Limn from Lymm post encouraged me to write about the beautiful Sandbach Crosses in Cheshire. From Anglo- Saxon times? Maybe !

Just a few lines and a short paragraph in my Limn from Lymm post prompted some comments about the beautiful, historic Sandbach crosses In Cheshire . These are two highly decorated and sculpted Anglo-Saxon pillars which stand in Sandbach market square in Cheshire. They were crosses but no longer look like crosses, more like pillars, standing proudly and tale. Some of the pieces are still missing.

Sandbach  is a small, sleepy  town in Mid Cheshire and its name means sandy stream or valley.

In earlier centuries AD Cheshire was subject to attacks from Saxons, Vikings and Welsh but Sandbach was of sufficient significance to get an entry in Norman King William The Conqueror's Domesday Book of 1086 where it was known and spelt as Sandbec

The Crosses are believed to be of Saxon origins.

The Sandbach Crosses are  two highly decorated and sculpted Anglo-Saxon pillars which are believed to date from the early 800's. Standing  in the  market square  they are  large and carved pillars but do not look like crosses now . They are English Heritage  Grade I listed monuments. It is believed that they were brought to Sandbach in the Middle Ages.

The crosses show Bible stories on each side. The "crosses"  are two perpendicular columns  on a base of three stone steps. They have no arms on them now. They seem to have always been a pair. It is not known who carved them .They show religious scenes including  The Nativity, Transfiguration and Crucifixion .

Below,  a delightful Cheshire black and white cottage peeping through the background.

The carving above is believed to show saints and Mary.

It is believed that during the English Civil War they were ravaged by Cromwell's men. On the 3rd September 1651, during the Civil War,  opposing sides had an encounter on the town's common where the September fair was taking place. Scottish troops were retreating from the Battle of Worcester and met with Cromwell's men. The villagers were incensed that their crosses had been badly treated and set upon the soldiers.

The pieces of the crosses though were scattered around Cheshire.

The carvings are still very beautiful and clear despite being over 1000 years old.

In the early 19th century the pieces  were collected together and in 1816 were rebuilt  at the instigation of Cheshire historian, George Ormerod.

Yes, I had an interview in Sandbach many years ago.

Thanks Frank. I hope that helps Derdriu.
Have you ever seen the Sandbach Crosses?

I don't know the answer to those I am afraid,. They are remarkable though aren't they . They really should be seen close to in order to get the overall impression.

The crosses are made of New Red Sandstone, which is the bedrock under all of Cheshire, except maybe a thin strip on the edge of Derbyshire. Local stone was almost always used except for great cathedrals that might import stone and maybe some castles.

Veronica, Does anyone know where the building material came from, and what it was about Sandbach that warranted the crosses' placement there? How were the crosses put back together? I wouldn't know from looking at the images here and elsewhere that they were so extensively reconstructed.

Aren't they ! To think they have been built for over 1000 years and still stand there in the town square is amazing indeed. The images are very Biblical and beautifully carved.

Those are really beautiful, Veronica. It must be amazing to walk by them every day. I'd love to study the images more closely.

They are one of the special things in England which tourists who only visit the South miss out on.

I love them because they are over 1000 years old and yet the workmanship is such that they are still beautiful to see.

Love the photos and this information. Thanks

PS Sandbach in English would be pronounced as SAND BA with "ch" on the end as in cheese or .... " SAND BATCH "

Built after the great fire of London in 1668, frequented by writers down the ... 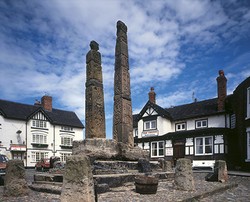 Although not as well known or as filling as Lancashire recipes, Cheshire traditional food is just as good. Cheshire was originally an inland salt lake and the soil is salty.
53%  11   3 Maritravel
United Kingdom of Great Britain and Northern Ireland

Built after the great fire of London in 1668, frequented by writers down the centuries, the pub still attracts writers and visitors from all over the world.
Loading ...
Error!