Enjoy a few of the favorite things Scotland brings us, the amazing and magical place famous for so many fantastic inventions and talented people.

I love Scotland it is home to my ancestors. I was born and raised in the states and did not truly realize my Scottish roots until I was a young adult. Since then I have learned a great deal about Scotland. I own a kilt, have my tartan I gather with a beautiful thistle broach a dear friend brought back from Scotland. I wear all proudly to the Kirkin O' the Tartan every year! I also proudly fly St. Andrews Flag on my front lawn.

Scotland is a rich bit of talent spreading widely throughout the world.

Today I would like to share a few of my favorite things about Scotland. Although Scotland is a wee bit of land it is one of great pride with a multitude of brilliant and creative people. The Scottish people have contributed a lot of great inventions to the global community, some of which bring comfort and pleasure.

One such invention is golf. Many have claimed to have invented golf and yet the Scots are the original inventors. So no matter what you may hear, Aye lad, that’s un easy wun. The Scots lad, the miti Scots invented golf. A Scottish man named Haggis Macgregor invented golf and that be the truth, I never lie, just ask me I’ll tell ya!

Golf was created and perfected in Scotland 1340

Scotland gave birth to golf since 1340 when it was primitively invented. Scotland is the place where they added the hole, the clubs and the balls we use today. So what was left for anyone else to invent, well they perfected mowing the greens, maybe we’ll give um that! We do like the tall grass in Scotland, but hea we like a challenge.

Scottish are a happy and funny lot.

Then there’s laughter, I've spent many years now getting to know my Scottish family and community which is rather large here in the states where I live. Adding to the list of my favorite things about Scotland is the people and their laughter.

The fact the Scots are the only source of any and all fine Single Malt Scotch Whiskey may have a wee bit to do with it. No others know how to create a fine scotch, really!

They are a happy lot and do know how to find joy in life. To that I offer up a wee bit more humor for ya!

Robin Williams on Scotland and Golf the Scottish Game

Scotland is known for its beautiful kilts, tartans and the men who wear both.

It’s a kilt if I wore something under it then it would be a skirt. That’s the truth of the matter, they wear nothing under them.

Trust me I've seen a good many kilts tossed up in the wind and yet nair a shy Scot to concern himself with pulling it down.

Kilts are trendy and more casual now, you can see the latest trends to your right.

Men in kilts get the attention of the best looking women. A true fact. Scotland is the creator of the best television series ever.

The best of television programming ever!

My favorite TV program is Dr. Who. My eleven year old turned me on to it and we've been hooked since. It's a ritual and we never miss a program.

It's an exciting time travel drama that's just packed with action and one mind boggling adventure after the next.

If you’ve never seen it you, in my opinion. are missing the best show on the air. There may be one in the running.

Check it out on the BBC channel

Downton Abbey is an infectious television series with a huge fan base.

Downton Abbey is the ancestral home of the Earl and Countess of Grantham (Hugh Bonneville and Elizabeth McGovern) and their daughters, who live there under the very careful and watchful eye of the stoic Dowager Countess (Dame Maggie Smith).

The home is a complex collection of characters.  The jealous servants highlight those living above them in all their spoiled glory. The story line is packed with romance, ambition, and heartbreak. A thrilling drama you're sure to get addicted to as do all viewers.

Scottish folds were first found mousing the farms of Scotland.

Now let me move on to the furry and cuddly of my favorite things of Scotland. Now be prepared to fall in love with these adorable and unique creatures.

Yes, even the cats of Scotland are special.

This special breed of cat is home to Scotland and originated as a common farm cat.

Introducing the Scottish Fold, I'm sure your get where the fold comes from.

There are countless amazing Scottish men.

I end with the last but not least of my favorite things Scottish and that be the men.

Ah YES the fine men of Scotland, maybe you'll recogonize a few and ladies I'm sure you will.

Yes many a fine thing comes from Scotland and the men be one of them.

The great men of Scotland have created many a great thing themselves. They make our country great.

I adore Scottish men; they are smart, funny and insanely sexy in more ways than I care to share.

They are fierce and loyal to all they love and they love wholeheartedly with intense passion.

I have grown to have a fond weakness for all things Scottish and the men are certainly one of those guilty pleasures.

So I bid your farewell and send you off with a wee glimpse of the most favorite of my favorite Scottish treats.

Scottish men are insanely talented and wicked smart, strong, gentlemen and intoxicating. Scottish men have an old world flare, confidence and tend to be handy in and around the house as Scottish men learn to do things for themselves.

Note: I have many more favorite things, to be continued

What's Your Favorite Thing about Scotland and the Scottish People.

Interesting, I had my DNA tested I am Scottish, Irish and Welsh

Britons told the Romans that the Picts were the first people of the island. However, the difference between them and the Britons is not to be exaggerated, for the Celtic culture of the southern part of Britain was more of a cultural import than a significant ethnic difference from what went before. Besides this, while the Scots were Irish who invaded West Scotland, they were not too different ethnically from the Picts.

When the Scots overcame the kingdom of the Picts the Pictish people did not go away, but stayed in place and simply carried on, so today's Scots are a mixture of Scots, Picts, Scandinavians, Welsh [in the southern region] and Angles, many of whom settled in Scotland, to which we add some Norman/Flemish who arrived with the Normans who supported the Scottish kings during the baronial wars between Stephen and Maud in England.

The Pictish heritage is probably greater in East Scotland than it is elsewhere, where other ethnicity is predominant. There is an excellent tome, The Origins of the British, by Oppenheimer, well worth reading

I have a friend of Scottish descent, and he claims to be from the Picts. I believe the heritage is different from much of the U. K.

frankbeswick, I grew up with three older brothers, they taught me the fine art of hurling the biggest rocks I could muster, play with sticks and balls and sometimes garden vegetables...

Golf, clearly a Scottish invention, is one of a number of stick and ball games that seem to have originated in the British Isles. Scotland also has Shinty,a Scottish version of hurling, and we have cricket and hockey. Is the fact that we have such a variety across the four nations an indication that the roots of stick and ball games go back a long way in our islands.

DerdriuMarriner, I am Scottish and so I agree...

katiem2, Amen! One of my favorite things about Scotland and the Scottish people -- nation and nationality of a maternal line -- is their respect for human- and Nature-made resources, which shows up in their thriftiness. As much as I like Shakespeare, Macbeth is both one of my least and most favorite plays, because it deals with Scotland, but not accurately.

I grew up in Scotland so I have many favorite things. I do agree with you about those handsome Scottish actors!

sheilamarie, I love a Scottish accent, my elders have wonderful accents.

Johnny Depp is one amazing subject to look at, if you never get tired of looking at Johnny Depp come check out these great affordable quality prints, posters and paintings of Depp.
100%  34   12 katiem2
American Folklore 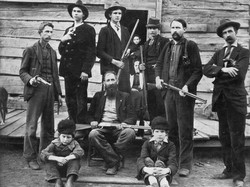 Read and share old fashioned and old timey sayings wives tales funny hillbilly and other expressions and phrases of the past from all around America
Loading ...
Error!