This page explores the question of whether or not tougher jail sentences in the criminal justice system actually reduce crime, or whether they cause more problems.

Preventing and reducing crime is a goal that I care about a lot. In the public dialogue about crime, I often hear people talking about sentencing as if they are taking for granted the idea that tougher sentences reduce crime.

As you will see, I think sentencing is more complex. There is a point at which it is good for sentencing to not be too lenient, but if sentencing is harsh beyond a certain point, it can create more problems than it solves.

What I Think Matters: Preventing Crime

I'm not a fan of "making people pay"; I care most about protecting people in society from harm.

I want to make clear on this page that, in designing a criminal justice system, I want the #1 priority to be preventing crime and ensuring the safety of all citizens.

Some people think about retributive justice, like the idea of making someone pay for their crime, or getting revenge on someone who has wronged them.  I don't like this idea.  For one, it conflicts with my religious beliefs, which you can read about here.  This idea also seems primitive and it often seems to devolve into anger, hate, and demonizing people who commit crimes.

I know people who have been to jail.  One of my friend's husbands took his own life while in jail, leaving her as a single parent.  In this case, his psychiatric medication had been withheld from him, by the prison staff.  These sorts of abuses are common in American prisons.  I think it is important to view people who commit crimes--even those who are legitimately guilty--with compassion, and work to heal them, and protect them from harming other people as well as themselves.

I think this is the best way to prevent crime.

Do you think retributive justice or rehabilitation / restorative justice is more important to you?

When The Innocent Are Convicted

No justice system is perfect, and innocent people are sitting in jail across the U.S.

No criminal justice system is perfect, and in spite of the innocent before proven guilty concept, strongly embedded in the American justice system, there are a lot of innocent people who get convicted.  Most of these people are people who are poor and somehow disadvantaged or disliked, both because these people are more likely to be wrongly targeted, and less likely to afford a lawyer.

The Innocence Project maintains a list of people who were on death row, and were found innocent due to newly analyzed DNA evidence.  The standards for sentencing for the death penalty tend to be much stricter than for other crimes, so it is reasonable to conclude that there is a much greater portion of innocent people serving jail sentences than people scheduled to be executed.

This is disturbing...one thing to consider in strict sentencing is that, in any justice system, some innocent people are always going to be sent to jail.  If sentences are too harsh, this not only affects the people who actually committed crimes, but also the people who did not.

Putting people in jail has high direct costs, but even higher indirect costs.

Putting and keeping people in jail is extremely costly.  Wikipedia has an excellent article on incarceration in the United States, and this article cites figures of an average cost per year of around $30,000 to keep someone in prison, in 2007.  This varies widely from state to state, with some averaging closer to $50,000.  This amounts to about $74 billion over the U.S.  SmartAsset also has a lengthy article on the economics of the American prison system.

But these are not the only costs to the economy.  Whenever someone is put in prison, they are taken out of their jobs, families, and communities.  Many people who are put in prison had full-time or part-time jobs prior to their incarceration, and in many cases, their job is unrelated to their offense.  Each person taken away from their job in this manner forces the employer to go through the search and hiring process to find a new candidate.

Some people think about criminals as "bad people" but this generalization is not true.  Many people convicted of crimes may have problems in one area of their life (such as drugs, domestic abuse, etc.) but may still be a valued employee.

When fathers and mothers are put in prison, it also takes a toll on their families, especially when they have children to support.  Incarceration can essentially create single-parent households, placing additional stress and burdens on the remaining parents.  In communities like inner city areas and some poor rural areas where a large portion of men are incarcerated, the lack of older male role models can make things difficult for younger men, further increasing the risk that they fall into crime.  All of these, beyond the human costs, produce further economic costs.

Here are some opinion pieces on the topic of whether or not tougher sentences reduce crime:

These are just a brief selection of the more useful and accessible pieces I've found that were written on the topic.  As you can see, there's no quick-and-easy answer.

Reducing Recidivism - Keeping Prisoners From Coming Back to Prison

An example of an approach Kentucky took to reducing recidivism, thus saving money and reducing crime.

Drug-related offenses, usually drug use, evidenced by failing a drug test, is one of the main things that lands people back in jail after they are released on parole.

There was a recent NPR program, Here and Now, which studied a very effective program Kentucky implemented that reduced recidivism (and saved the state a ton of money).  The program involved a combination of giving judges more flexibility in sentencing (allowing for lighter sentences in some drug-use-related offenses) as well as more supervision and oversight during the initial release from prison.  This is the best sort of solution, because it not only saves money but reduces crime--as there are fewer people committing repeat offenses and being sent back to prison.

Is recidivism something you have thought about before?

Did you ever think, hear, or read about recidivism before encountering this article?

More Of My Pages

Like the approach I take here? Please visit more of my articles!

Benefits of Forests for Humans
Benefits of rainforests to humans, moderation of climate, temperature, rainfall, and wind, economic value of forests, etc.
Updated: 08/14/2013, cazort
Thank you! Would you like to post a comment now?
4

Thank you all! I find the analogy to health interesting; I hadn't thought of that when I was writing this article, but now that you mention it, frugalrvers, I think it makes a lot of sense.

I think both are examples of how holistic thinking (looking at the big picture) leads to different approaches to problems. I think that the analogy you suggest between incarceration and treating symptoms is actually a pretty deep one that rings true with me on a lot of levels. Like...if it gets to the point that someone has committed a crime and ends up in jail, something has already gone wrong--and it would be better (and less costly) to intervene earlier and prevent the crime from being committed in the first place. Putting someone in jail also doesn't usually repair the harm done by the original crime.

It seems really similar to the approach of intervening very late in a medical condition where you can't really solve it--vs. catching something very easy where you can treat it or prevent it entirely, with an effective, low-cost solution...things like catching and removing pre-cancerous cells, or preventing people from getting sick by promoting overall health. I'm a huge fan of preventative health!

This is a fantastic, thought provoking article...

It reminds me of the way conventional medicine is handled, too...we're always investing energy and money into the wrong side of the equation...AFTER illness (suppressing or fighting symptoms) vs taking steps to prevent it.

This is certainly a complex topic! Thank you for tackling it, and for expressing some very valid points. We do need to protect society, but we can't just lock people away and forget about them. I totally agree that prevention of crime would be the best solution!

Alex well done and welcome to wizzley. I believe we all agree, convicting and incarcerating an innocent person is never a good thing. On the other hand, I can’t help but ask, how many guilty of serious crimes are never brought to justice. Then again, I believe your broader point. What is true justice anyway, and can we, or are we as a society willing to solve the problems turning folks to take part in criminal activities?
Be well, teddletonmr

I actually agree with your comment about my poll, and I was thinking about it and I think it would easier for me to remove it at this point because I'm not sure it's the best question to ask in a poll.

I like this article in general. I think your poll about innocent people in jail is limiting - it presents two very specific viewpoints, and I think it's easy for someone not to agree with either one. I'm leaning towards the idea that it doesn't matter so much whether or not the people in jail are innocent, they still need to be treated well, because they're people. I don't think they "deserve" any kind of treatment based on what they've done or haven't done. 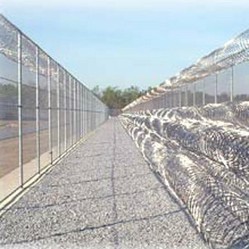 Why This Way is a consensus-based organization and belief system which may or may not be a religion, depending on your definition of religion.
93%  13   7 cazort
Nature