Shea butter is a natural and gentle skin moisturizer that soothes dry skin and protects from chafing.

I have always suffered from dry skin, especially in the winter. As a child, I had eczema that forced me to avoid all soaps and use thick emoilent rubs to keep my skin from blistering to a red, itchy disaster.

Although my skin is not that bad anymore, I do occasionally suffer from dry, cracked thumbs in cold weather, especially if my hands have been in water a lot, washing dishes for example. And I tend to be itchy if I do not apply lotion each and every day.

I admit that I am totally addicted to lip balm. I am never without it. My lips always seem dry and uncomfortable unless I have them slathered with lip balm.

Although my skin is overall better in the summer, during that season I suffer from terribly dry and cracked heels. It's embarrassing to have such ugly feet when I wear my Chaco sandals.

Shea Butter to the Rescue

A Natural Alternative to Man-made Lotions

I've used all kinds of lotions, gels, oils, and ointments over the years. But only recently have I discovered shea butter -- a natural oil that comes from the African shea tree (Vitellaria paradoxa).

I was suspicious at first to buy a $10 tub of this mystery substance from a vendor at a regional fair. But the African salesman assured me that I would love it and told me that if I didn't love it, I could bring it back. Since I was, in fact, planning to visit the fair a few days later, I took him up on his offer.

Let me say that on my second trip to the fair, I sought out this gentleman to thank him for selling me the shea butter. Wow.

Rub it anywhere you have dry, rough, chapped skin:

Shea butter is somewhat like butter in that it hardens in cool temperatures and melts in warmer ones. If the shea butter feels hard or even crumbly, just work it with your hands until it softens. It will then easily rub into your skin.

For a special treat, melt a small amount in a dish in the microwave. (It melts quickly, so watch it! It will only take 30-60 seconds.) Rub that melted oil on your driest spots for instant warmth and relief.

Shea butter moisture really lasts. Whereas most lip balms have me reapplying every half hour or so, the shea butter sticks with me for over an hour.

Because it is naturally concentrated, it only takes a small amount to provide intense moisture. It is not like watery, man-made lotions that require heavy applications for minimal relief. The feeling is different from a lotion, though, and may take some getting used to. I find the thick buttery cream very soothing, but it does not "dry" like a lotion normally does. There is a slight residue left on your skin. For example, when I use shea butter on my hands, I don't like to use my iPhone because my hands will leave tacky marks on the touch screen. But I find that moisture barrier very soothing to my dry hands. The feeling is somewhat similar to that of using petroleum jelly. But I like that shea butter is totally natural whereas petroleum jelly is man-made.

Shea butter is good for using

The Shea Butter That I Use

This is an excellent value! Although the package is simple, the shea butter is pure and natural. Do you want to pay for the shea butter or for a fancy package with a pretty label? I have this exact tub of shea butter, and I can't imagine it being any better.

The products below are packaged in prettier tins and tubs. They have been purified to a higher level. Fragrances and other additives may have been added.

To Create Shea Butter in Africa

Have You Ever Used Real Shea Butter?

Are Natural Moisturizers Better than Man-made Ones?

Using the natural shea butter recommended here, you can make your own hair and skin products. You can customize them to your skin sensitivities and preferences.

I really enjoyed watching that video of African women making pure Shea butter. It makes me want to put some on right now. Thank you for sharing these wonderful tips.

I have to apply a lip balm a few times a night. I'm definitely going to look into shea butter as an alternative! Thanks for the tips :)

What a great idea! I have sometimes used straight olive oil, recommended by my sister who suffers the way you do. I'll have to try shea butter and pass the word to her as well.

Interesting. Vaseline is the only thing I've found that works on my lips, I seem to have a reaction to other things. I might try pure Shea. 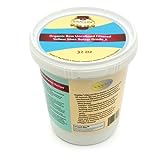