Jockey Bill "Willie" Shoemaker had more Kentucky Derby mounts than his contemporary rival, Bill Hartack, and Eddie Arcaro, who was finishing his career in the 1960s.

In longevity, Bill "Willie" Shoemaker, also known as "The Shoe", had few rivals. He was still riding mounts in the Kentucky Derby (23 in all) in the 1980s when he was in his fifties, while his chief contemporary, Bill Hartack, had worn out his potential employers with his chronic irascibility, and Eddie Arcaro, champion rider of two American Triple Crown winners, had wound down his career in the 1960s.

Even Eddie Arcaro and Bill Hartack couldn't catch him

Shoemaker won the Kentucky Derby in 1955 aboard the phenomenal Swaps. Tomy Lee gave him Derby triumph in 1959. Lucky Debonair in 1965, and the eventual 1987 Breeders' Cup winner Ferdinand completed Shoemaker's Derby triumphs in 1986.

The jockey was quoted as naming Ferdinand as his favorite ride of all time.

Ferdinand came along late in Shoemaker's career, and he was not a favorite in the 1986 Run for the Roses. Shoemaker was fifty-five-years-old. But Ferdinand's trainer, Charles Wittingham, thought the chestnut colt, sired by Nijinsky II (who was sired by Northern Dancer), was special, and he wanted The Shoe for the Derby ride. Willie came through. He guided Ferdinand from last to first to the wire, and he later said Ferdinand was one of the great rides he was privileged to have had in his long career.

Ferdinand started five races at age two. He won once, placed once, and was third twice, winning $178,650.

At four, he had a banner year, going four of 10 posts in wins, finishing second twice, and third once, while earning $2,185,150. He captured the fourth ever Breeders Cup Classic that season.

He raced at age five without winning in six starts, placed three times, and finished third once. That year he earned $432,500.

Ferdinand's Derby year, 1986, was also an excellent one. He won three of eight starts, placed three times, and took third twice. His earnings were $981,678.

Before and after Ferdinand, Shoemaker rode in a remarkable five other Derbies in the 1980s.

Other than aboard Ferdinand in 1986, Shoemaker's closest run to the finish line in the Derby that decade came with Gulch in 1987, when he reached the wire in 6th place. In 1981, he rode Cure the Blues to 15th place. Star Gallant placed 7th with Shoemaker in 1982. Silent King gave him a ninth place finish in 1984, and he took 12th place in 1988 with Lively One.

In the 1950s, Shoemaker rode in six other, non-winning Kentucky Derbies:

The ATC Has Been Won by Just 13 Thoroughbreds

What jockey won the crown twice in the 1940s?

He is the only jockey in history to achieve this difficult feat and he managed to do it in a span of eight years!

(Check further along in this blog for the answer!)

How Arcaro and Hartack Measure Up

More Wins But Less Rides in the Derby

Bill Hartack, who repeatedly opposed Shoemaker on first Saturdays in May for the Kentucky Derbies of the 1950s and 1960s, won three of his five Derbies within five years. His first Derby victory was aboard Iron Liege in 1957. In 1960, he won with Venetian Way; in 1962 it was Decidedly; in 1964, the great Northern Dancer; and in 1969, Majestic Prince took him first to the wire.

In his Kentucky Derby attempts, Hartack totaled 11 rides. His last Run for the Roses took place in 1974 aboard Sir Tristram, with whom he finished 11th, eight places behind Shoemaker and Agitate.

Arcaro finished his Derby string of 22 mounts on Sherluck in 1961. He was 5th behind The Shoe on Dr. Miller, who ran 4th.

Willie Shoemaker's shoes are still the ones to fill in durabiity and number of mounts ridden in the Run for the Roses.

Although one Kentucky Derby win shy of Hartack and Arcaro, Willie Shoemaker was the first jockey to earn $100 million -- ?

Willie "The Shoe" Rode Some Greats

Swaps, a chestnut colt from a pairing of Khaled and Iron Reward out of Beau Pere, put Willie Shoemaker into the Kentucky Derby winner's circle for the first time.

Shoemaker left a hospital bed in California, barely healed from a leg injury, to ride Swaps in Louisville on the first Saturday in May of 1955. Swaps carried the ill-prepared jockey to Derby glory, beating his majorly hyped competitor, Nashua, by 1-1/2 lengths.

Swaps won $418,550 that season with eight victories from nine posts in all, while finishing second once.

As a well thought of two-year-old in 1954, Swaps went three of six in wins, collected two third place showings, and $420,950 in track earnings. He raced at four years of age, winning eight of 10 starts, posting one second and earned $409,400 in purses.

Native Dancer was named 1954 Horse of the Year, while Swaps won that honor in 1956. Other top notch runners of Swaps' era included Bold Ruler, 1957 HOY and eventual sire of Secretariat, and Nashua, who won the 1955 HOY after claiming victories in the Preakness Stakes and the Belmont Stakes.

Iron Leige, Gallant Man, and Needles also were Thoroughbreds of note racing at the time of Swaps' career.

The Answer to "Winning the Big Bucks" is...

In 1951, Shoemaker won the George Woolf Memorial Jockey Award. From 1958 to 1964, he was the leading jockey in racing earnings.

In 1976, Shoemaker was presented a Special Eclipse Award for his lifetime achievements, and in 1981, he was given an Eclipse Award of Merit in addition to being named that year's top jockey.

At the age of 60, Shoemaker garnered the 1990 Mike Venezia Award in recognition of his stellar and long career.

Again, Shoemaker had a complicated situation before he mounted Tomy Lee. He had ridden Sword Dancer, a favorite to win the Derby, but Shoemaker's manager had promised Tomy Lee's trainer that The Shoe would take Tomy Lee in the Derby. Shoemaker, convinced Sword Dancer would be the horse to beat, nonetheless honored the commitment his manager had made and agreed to ride Tomy Lee.

Sword Dancer and Tomy Lee battled, but the better jockey got his horse to the finish line first.

Tomy Lee didn't race at five years of age, but returned to the track when he was six-years-old and won his only post, collecting $4,125.

Looking for The Shoe

The Answer to "What jockey won the American Triple Crown twice" is...

Whirlaway was his champion mount in 1941, and Citation gave Arcaro an historic second triple victory in 1948.

Arcaro remains the only jockey ever to win two American Triple Crown championships, and he achieved it twice in one decade! J

Lucky Debonair Has the Pluck...

In 1965, a fellow named Dapper Dan blitzed through the Kentucky Derby's last quarter mile in 23-1/5, two fifths of a second faster than Whirlaway's time in 1941 and Hill Rise's race in 1964. The Dapper one established a track record with that last quarter mile time at Churchill Downs that stood until Secretariat's blistering :23 flat eclipsed it in 1973.

But Dapper Dan didn't have The Shoe, and he didn't win the 1965 Derby.

Some said Lucky Debonair was lucky at the end not to be overtaken by Dapper Dan. However, the experience of Willie Shoemaker may have been the difference. The Shoe didn't let Lucky Debonair get lazy near the end of the Run for the Roses; he kept pushing to the finish, and Lucky triumphed over dapperness by the length of a neck.

As a two-year-old prospect, Lucky Debonair posted once unplaced with no earnings collected. Then he turned three and won the most famous Thoroughbred horse race in the world.

In his Derby season, he snagged $257,210, winning a total of six races from 10 starts and placing second three times.

Lucky Debonair's breeding included Vertex as his sire. The bay colt's dam, Fresh as Fresh, was by the 1943 Triple Crown Champion, Count Fleet.

The Shoe Guided the Guild

Exemplifying his excellence on the race track, Willie Shoemaker rose to the task of leadership as an individual, as well. From 1975 to 1990, he served as president of the Jockey's Guild, an organization that looks out for its own.

The Guild undertakes fundraising for jockeys injured on the job and considers the welfare of their families.

A giant in the saddle, Shoemaker was among the first of the Sport of Kings' superstars who gave back to the sport that supported him.

When he hung up the irons and tack after his last ride, he began helping to train Thoroughbreds for the track and to mentor young riders.

Shoemaker himself was paralyzed following a car accident in April of 1991. The Shoe didn't stay silent after tragedy. He picked up his pen and shared his knowledge of Thoroughbred racing through fiction and fame.

The thumbnail photo for this article is taken from a scan of the cover of the author's personal copy of The Black Stallion's Courage, 1956, by Walter Farley; Random House, New York, NY.

Who Is Your Favorite Jockey? Please fill us in!

Teach Your Horse to Neck Rein

I am going to outline the steps to take to teach your horse a very useful ski...

Riding stables and trail rides in the lower mainland aren't as inaccessible a... 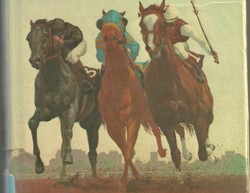 Teach Your Horse to Neck Rein

I am going to outline the steps to take to teach your horse a very useful skill - neck reining.
26%  2   3 EnelleLamb
Horseback Riding Riding stables and trail rides in the lower mainland aren't as inaccessible as some would think, and most cater to the size of your party and your budget!
Loading ...
Error!