Sign Language Jewelry - A Unique Way to Say I Love You

Here's a great way to tell the special person in your life that you love them. Sign Language jewelry is one of the hottest fashion accessory trends.

I live in northern coastal Maine where nothing much ever happens. We square dance on Saturday night, eat at the local diner and everyone knows everyone else's business. I would worry about my lack of privacy, but growing up here, I've never known what privacy was. A few summers ago, rumors of gang activity started to surface. Well my mother didn't know anything about it, so how could it be? It seems teens and pre-teens were acting strangely at the local mall. Making all these hand signs dancing around. What, was the 4H Club going after the music club? On the more serious side folks were worried that maybe meth labs had finally made their way to rural New England.

Luckily a crack investigative reporter quickly uncovered the truth - the teens were signing I Love You with their own special body language and dance steps included. Nothing sinister in the least. In fact there were even a few henna I Love You tattoos uncovered. Parents could breathe a sigh of relief. But as quickly as they stopped worrying about gangs and meth, they started to worry about D-A-T-I-N-G and their young teens.

I Love You Charm Jewelry

How to Spot a Pre-Teen Signing I Love You

So don't you panic if you start to see your child making all sorts of strange hand signs. Schools have also reported that pre-teens are more into hugging and greeting each other physically than previous generations. So you might start to see some body language that doesn't make sense in your eyes. Just remember that every generation has loved keeping its secrets - decoder rings, Pig Latin, diaries with locks on them. I think that's were American Sign Language fits in as well. It's similar to the fascination with Chinese characters for expressing emotions.

If you're some of the parents that have taken the time to teach your babies ASL, then you might want to include that on your wife's charm bracelet for that reason alone.

And since I don't have any children, I don't usually give out parenting tips. If your pre-teen starts sporting one of these pieces of jewelry, you might want to start thinking B-O-Y-F-R-I-E-N-D. Might be the time to start asking who she's with at the mall on Saturday.

Wear a shamrock necklace or pendant to celebrate your Irish heritage.

I Love You Necklaces are the Perfect Romantic Gift

Your true love will adore showing off her I Love You necklace to the world. H... 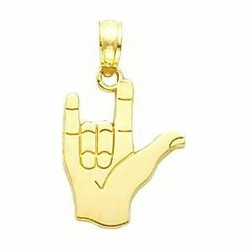 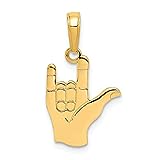 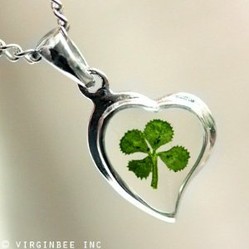 Wear a shamrock necklace or pendant to celebrate your Irish heritage.
29%  3   3 Digby_Adams
Necklaces 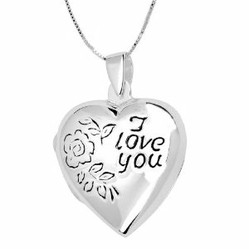 I Love You Necklaces are the Perfect Romantic Gift

Your true love will adore showing off her I Love You necklace to the world. Here's a great selection for Valentine's Day, a wedding anniversary or birthday gift.
Loading ...
Error!