Since When Is Art Not A Business

My family is full of professional artists who entered the business for love, not money. The fact that The Arts feed the soul does not mean that it is not a business.

Artists pursue their passion, despite the obstacles. They struggle to make a living, often requiring them to take on second and perhaps third jobs to pay their bills. Meanwhile, there are always people who treat them like they are pursuing a hobby, not a career. My family is full of active and retired professional artists, and professionally trained artists. It is our passion.

My entire family is artistic. Even the people who do not pursue a professional career in The Arts have been professionally trained. I know what I am talking about when I say that you do not enter the visual, written, or performing arts to make money. My parents are retired musicians, my Mother is a visual artist, her sister was a classical pianist, and none of them made any money in The Arts. 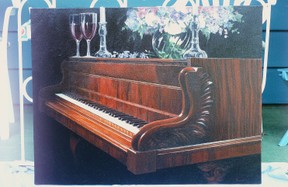 A painting by Breen Bergstrome, my mother, for a wedding present from us to a fellow musician.

It Is A Lifelong Passion

If you want to hear their most successful song, Don't Say Goodbye, look for a recording that Percy Faith and His Orchestra recorded on *his* album entitled I Think I Love You. In irony of ironies, my father's name is Charlie Robison-if you look up this name you will see hundreds of references to the Country singer who used to be married to a member of the Dixie Chicks. The only way you can be certain you have the right Charlie Robison is to look for his music that he co-wrote with Elliot Kaplan-yes, the man who wrote both orchestra music and the theme to Fantasy Island.

I tried desperately not to enter a career of writing or performing music because I know this will mean I will never have a regular pay check where I know ahead of time when I will be paid, or how much I will be paid when I am paid. I don't want my art to be a source of stress over whether or not I eat, or pay my taxes, or pay my vet bill. I don't mind having little money, but I want to be able to budget-and I cannot do that when I get paid by commission. But in trying to avoid this hand to mouth existence, I deny my soul's ability to grow. I sought out a job in a bookstore to be surrounded by the written word , but bookstores are scarce and even if they weren't, you have to be able to carry heavy boxes of books or climb tall ladders. I cannot do either. I could work in a music store, but most music is bought online anymore. So I must return to practicing Art, rather than merely surrounding myself with it.

One beautiful way to combine the soul of art with the business of paying your bills is to be a Music Teacher. I am surrounded by musicians of all instruments-instructors, students, and audience members. All of my social life revolves around people I have met through music. One of my closest friends teaches classical piano in her home. Instructors must follow The Toronto Conservatory of Music or other similar Institution's text, because their students must be able to pass exams based on these regulations. Even if some of the pieces don't touch her heart or those of her students, those are the rules. Art is a business and students must pass these exams if they want to become music teachers themselves. However, she closes these required scores when the last student leaves. She opens the scores of the pieces she loves and plays her music-for her. It is a wonderful balance, but not one that all branches of the Arts provide.

The Business of Art Is Necessary

If You Are Not Careful, Your Internal Love for Art Could Suffer

You have to be careful that you neither forget nor get caught up in the fact that professional art is a Business just like any other. As long as you realize this before you decide to pursue it for your career rather than as your passion outside work, you can guard yourself as best as you can from any pain or stress that comes from living commission to commission.

As the exact opposite to the music teacher who can separate her work music from her home music, I have another friend who teachers music who hates to talk about it in her free time. This woman has always loved music and knew as a child this was all she wanted to do for a living. She moved away to become a music teacher and everything was wonderful. Then she got married and moved back here where her new husband worked and where there was huge competition. She had to go into business herself. She teaches the same composers and genres that she personally loves in her own home. As such, there is no separation between her personal and professional life. She no longer wants to talk about music when she isn't teaching. Yet this was always her passion.

What happened to her is my greatest fear in being an artist. It has kept me working at other things that do not interest me deeply so that I can love to write or sing in my spare time. Singing is my sanctuary. It is like a spiritual experience for me to sing in a choir, even when the music isn't religious in nature. I need to love singing. If I grow to worry or hate or feel any other negative emotion I might never get back what I feel when I sing. Meanwhile, I was working as a bookkeeper. That's right-nothing to do with writing, singing, acting, or painting.

Breen Bergstrome, aka Breen Robison, Has Been Visual Artist Most of Her Life

All of the paintings in this article were painted by my mother-Breen Robison Bergstrome. She has been a starving visual artist for over thirty years. She has never wanted to do anything else. This is despite the fact that she lives month by month and is never able to save up for a safety cushion. Art is priced by the size of the painting. Yes, famous names-especially dead names-sell art that is worth a fortune. But within the framework of artists of the same fame and stature, paintings are sold according to their size-not their subject matter, medium, or amount of detail. Art appreciation is too individualized otherwise. I have taken over as her agent and business manager so that she can focus only on her artwork. Original artwork is hard to sell in this economy. Giclee (pronounced zee-clay) prints are the way of the future.

Portraits of Flora by Breen Bergstrome

I Have Been Mom's Model Since I Was A Baby

Few People Are Rich In the Business

What of acting? Big movie stars of today like Tom Hanks or George Clooney can demand large paychecks. In the studio system era, even the biggest stars didn't make the kind of paychecks similar in amount when you allow for inflation. Some people may then think that acting is an exception-such people are dead wrong.

Movie stars with huge paychecks are simply a tiny number of actors whose names you have heard. There are only two percent of actors who belong to the Screen Actor's Guild who are working at any one time. And to get a union card, you have to have worked in 5 projects first in a city that wants to hire only union members for everything except, maybe, extra work. Who knows what that percentage actually is if you try to count the number of actors who do not belong to either SAG or AFTRA as well as the theatre actors?

Theatre-now there is a profession you enter for love alone. Even the biggest names on the marquee take a big cut in pay for the privilege of performing in front of a live audience. Whether you are referring to a play, musical, or dance, theatre people live, breathe, and dream of Art. They are among the most dedicated artists you will see and they enjoy their career more than most anyone else in the arts. This is despite the fact that they can consider themselves lucky if it takes only six months to get a job on Broadway. Even then, they may need a second job or more than one roommate to help pay the rent.

Writing is a business too. It is a dying print business that is now becoming more and more online. I am not happy about this trend. I would prefer to publish in print alone. But that is not forward thinking, nor realistic. Books are not quite dead, though the condition is ill. However, famous newspapers have folded and people tend to get their news over the Internet. E-zines grow in popularity.

Sue: My *mother* is the artist Breen Robison. She has gone back to her maiden name of Breen Bergstrome.

I just purchased a framed picture of Nomad of the North, signed by Breen Robison-----are you the artist?

I am now back to singing with the Chilliwack Symphony Orchrstra and Chorus.

I remember having an Uncle Tom.

Thanks for reading this article and leaving this message.

I never got to meet Elliot Kaplan, but I have heard lots of stories of him.

It is great to hear from you.

Hi Flora
I knew your father Charlie and briefly your mother way back in Eagle Rock California. Your dad was putting together a band with Eliott Kaplan (we called him OWI). I married your aunt Sherry Robison (we subsequently divorced in 1988). Your dad was a talented singer and Elliott was .... well he was Eliott (far too talented for any of us). All I can say to you is.... be true to yourself ...... look forward ........have courage.

I will need to find a new choir as I am no longer singing with the Chilliwack United Church.

I will likely go back to the original Church across the street from where The Chiliwack Academy of Music used to be.

I have lots of friends at St. Thomas Anglican Church.

Hello Mr. Roy. Do you know how I make money as a writer?

By people clicking on ads.

I am POOR and LIVING IN POVERTY IS HELL.

I ask that Bruce Cogerson aka Bruce Rogers yo please leave the comment as is.

I love your site.

How I could have wasted my time and energy writing poetry to that man I do not understand.

Wiliam Holden once said that he was and all others actors were whores.

I WAS DIAGNOSED AS HAVING BIPLOAR DISORDER AFTER A STINT IN A PSYCH WARD.

SHOULD I BE FIRED FOR HAVING MANIC DEPRESSION?

HOW DO I FIRE MYSELF?

This page continues to be popular - I'm glad.

It is important that people realize how much art is a business.

Hello, dudette...True. Unfortunately, some people don't manage to eke out a living even though they run their art as a business. If their clients, students, patrons, etc. see art as frivolous, they won't see the artists as business people and could try to take advantage of them. 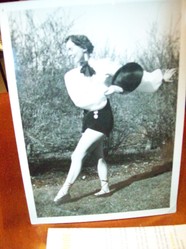