The extended family went up to Skipton for a family day for my birthday. What a fantastic place to visit and a great example of a castle.

Skipton castle Yorkshire is a beautifully preserved castle that was built in 1090. We had a day out and saw all the attractions of the day. There was a re-enactment of medieval court cases and the castle visitors were the jurors and also dancing and archery displays.

A great day out.

Skipton Castle was originally a motte and bailey castle made of earth and wood but was rebuilt in stone. It is a very good defensive position being near cliffs and a river.

It is an important tourist attraction locally and is also a private residence.

The castle has an outer wall, an inner castle, some outer buildings, a gate house and the words "Des or mais" above the gate. This is medieval French for henceforth.

The inner building of the castle

Inside the main building , there are stair cases everywhere, Norman arched windows and in the middle there is a courtyard with an interesting gnarled tree trunk. Very old .

This was a family day but we did our own thing meeting up on our way round.

The day we visited there was much to see. The organisers had used medieval court records to re-enact true court cases and we were the jurors. It was a fascinating look at the social history of the area.

The archery display was great fun. This is a cross bow.

I took part in the medieval dancing which was fun to watch and take part in. ( I am not pictured. )

The Chapel below is in the grounds and still has its Baptismal font in tact. The whole place is so well preserved, almost exactly as it would have been a thousand years ago. Look at the wooden  beams in the ceiling.

I wanted to show the inside and outside of the castle windows. Slit windows are a major feature of British castles.

If you want a castle that is in tact and not a ruin then Skipton has to be one of the best to visit. It was a great way to spend my birthday with family and friends.

OH my husband says that Slovenia is the most beautiful place he has ever been to. On our last morning we walked down to Lake BohinJ and sat by the lake , so sad to be going home. We stayed at Ribcev Laz. The Lake is beautifully preserved and clean and we walked in the mountains every day. It was marvellous and a still a holiday that we talk about.

Although we flew into Ljubljana, there as so much to do round Ribcev laz that we stayed round there.

I was badly bitten by an insect and the local medical centre treated me wonderfully.
Oh yes. Slovenia has a special place in our hearts.

It looks you had a great day in Yorkshire. We have a medieval castle in Ljubljana s well. Don't forget to visit it, if you travel to Slovenia;) Thank you for sharing all the lovely impressions with us.

Veronica, Belated Happy Birthday wishes! Did centre, inner courtyards have bigger, wider doors and windows to let in more light? How could it be other than a fortune in candles and firewood to keep those interiors light or did they all have dark-adapted eyes?

Everywhere in the N was vulnerable to their attacks. They attacked the N with savagery.

Yorkshire was vulnerable to Scottish attack as it had rich lands.

The Northern Norman Castles were certainly built as a defence against the Scots who were a vicious and stealing bunch. Raiding parties were common across the borders.

Yes indeed it is one of the earliest Norman fortified settlements.

I doubt they were comfortable even in stone castles. Very dark and cold. If you ever get to Uk , you would enjoy castles that's for sure.

Castles were designed for people who had a less than harmonious relationship with their neighbours, be they the nearest ones [peasants] or less proximate [e.g. Scots.] As the northern English had already displayed a propensity to massacre Normans, being safe inside the less than comfortable castle was preferable to being dead.

Skipton Castle was originally made of wood, but soon it became evident that the Scots had discovered how to set wooden castles aflame, so stone was preferable.And as Normans were considered less of an enemy than Scots were, the local English could take refuge inside the Norman castle. The Scots used to come south on slave raiding expeditions where they carried off people and property. This practice became less common after the battle of Northallerton in 1138 when an invading Scottish army was massacred and in 1157 when the Scottish king was forced to hand back English land that he had seized.

From the early date iit must have been right after William went through England. I realize the early castles were wood, so I would not expect any to remain intact. I doubt it woukd be comfortable enough for a residence, but there must be ways to make it so.

In 1132 when 13 monks arrived in the River Skell valley, Yorkshire, little di...

This week we had a family day out to the ruins of Beeston Castle, West Cheshi... 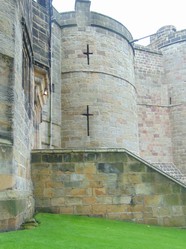 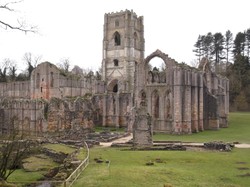 In 1132 when 13 monks arrived in the River Skell valley, Yorkshire, little did they know that the abbey they were building would become one of the richest in Europe.
51%  10   3 Veronica
Travel & Places 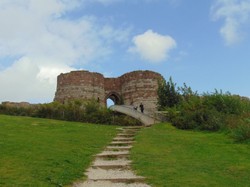 This week we had a family day out to the ruins of Beeston Castle, West Cheshire, close to England's border with Wales. Delightful.
Loading ...
Error!