Slenderman Costume - What started about as an interesting internet meme has turned into a word wide phenomenon.

Slender Man Halloween Costume - Every now and then an idea sweeps across the globe with absolutely no regard to reason whatsoever. The Slenderman phenomena is the perfect example of what happens when a concept goes viral.

What started about as an interesting internet meme has turned into a modern day urban legend! As such, this look may just be the look you have been searching for this Halloween!

Who Is The Slenderman? 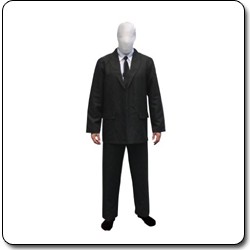 The internet is a fascinating thing. Where as once we had to rely on word of mouth to start, then spread, urban legends, we can now find them on thousands of websites across the globe.

My favorite is, of course, The Slender-Man.

In 2009, a forum called Something Awful held a contest in which user could submit real photos that had been altered to include something supernatural.

Despite the fact that there were a number of truly creative submissions, one concept quite literally rose to the top.

Submitted under the name Victor Surge, Slenderman made his initial appearance.

Described as being an unnaturally tall, and slim, man, this supernatural creature also possesses unusually long arms that supposedly help him to capture helpless victims. He always wears a dark colored suit and has a blank, white, almost featureless face that truly strikes fear into the hearts of anyone unfortunate enough to catch a glimpse of him.

Despite the fact that everyone knows that this character was created for entertainment purposes, there is a slowly growing subculture that has reported actually seeing this guy in real life.

Whether or not this is actually true or not is outside the scope of this article. Instead, I would only say that if something like this did really exist, I would not let my children out of my site for even five seconds.

This is particularly true since most of the photos show him with large groups of children and parents that report not even seeing him there at all. Any force of evil that sneaky would certainly cause a ton of anxiety and fear.

With that being said, I simply cannot image a more perfect outfit for Halloween than a sensational Slenderman costume. It has virtually every element needed to be a great look; including comfort.

If you love to play Minecraft, then a great Minecraft costume is just what yo...

Halloween is supposed to be dark and scary, right? Vampire costumes for kids ... 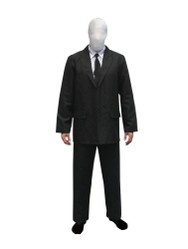 If you love to play Minecraft, then a great Minecraft costume is just what you need this Halloween.
8%  0   1 costumeideas
Halloween Costumes for Kids 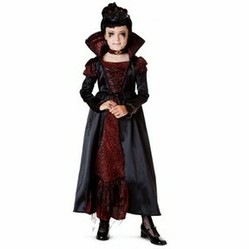 Halloween is supposed to be dark and scary, right? Vampire costumes for kids are always among the most popular costume ideas!
Loading ...
Error!