Physicist and photographer Kenneth Libbrecht studies how snowflakes are formed and photographs them. You can find his beautiful snowflake images in books and on posters.

How can something as ephemeral as a snowflake, or snow crystal, be photographed? It takes painstaking care and a willingness to spend hours in very cold weather to find, prepare, and photograph snowflakes.

The most beautiful snow flakes are the 6-sided snow crystals that we're all familiar with, but they also come in different shapes, depending on the weather conditions that formed them.

How can something as ephemeral as a snowflake, or snow crystal, be photographed?   People like physicist Kenneth Libbrecht have developed methods for photographing snowflakes, such as this beautiful snow crystal image to the right.

It takes painstaking care and a willingness to spend hours in very cold weather to find, prepare, and photograph snowflakes.

The best 6-sided lacy snowflakes, such as the photo to the right, are found when the temperature is about 5 degrees Fahrenheit (-15 degrees Celcius), although sometimes they can be found at just below freezing.

Kenneth Libbrecht is a physicist at Caltech who studies how snow crystals are formed, and he's one of the top snowflake photographers of the world.  The images you see on this page are from photos by Libbrecht.

Of course to find snowflakes to photograph, he has to spend time out in very cold weather while it's snowing.

In the video below, you can see Libbrecht carefully transferring snowflakes with a small paint brush to a glass microscope slide, then placing the slide under a specially made camera with a magnifying lens.   The camera is set up in the back of his van.

Often he has less than a minute to photograph the snowflake before it melts too much to be useful. Sometimes the snowflake disappears in a puff of wind before he can even get it to his camera.

The best  6-sided snowflakes form at 5 - 10 degrees Fahrenheit.  That's cold!  And as you can see from the video, he needs to keep his fingers free to be able to work with the snowflakes and the camera.

Kenneth Libbrecht says some of the best places in North America to find good snowflake conditions are in northern Ontario, northern Michigan, and Vermont.

Only some snowflakes are six-sided

Have you ever taken time to look carefully at snowflakes?   If so, you'll have discovered that they come in many different shapes and forms.

Most often the snow particles are irregular, blob-shaped snow crystals that are clumped together.  The symmetrical six-sided snow crystals are only formed under certain weather conditions.    Sometimes these six-sided flakes will have a simple design, while others may be be branched (dendritic) or fern-like.

Other weather conditions may form columnar or needle-like crystals, hexagonal plates, or triangular-shaped snow crystals.  Occasionally there are 12-sided crystals.  Temperature, humidity, and wind speed where the snowflake, or snow crystal, is being formed determine its shape and size.

Because of the shape of water molecules, the symmetry of snowflakes will always be 6-sided (or 12, or sometimes more like a 3-sided crystal).   You'll never find symmetrical 5, or 7, or 8-sided snowflakes.

Go to Libbrecht's Snowflake Morphology Diagram (from A Snowflake Primer) to see how temperature and humidity (water saturation) affect the shape of snowflakes.

Kenneth Libbrecht categorizes snowflakes into 35 shapes.  If you take a look at his Table of Snow Crystal Shapes, you'll see that the six-sided snow crystals, or snowflakes make up just a few of the possible shapes.

I had the delightful experience of observing needle shaped snow crystals last winter at about 20 degrees Fahrenheit.  They looked like little white hairs, about 3mm long, scattered across the dark green backdrop of our minivan.   Unless we observe snow and snowflakes over a long period of time, we don't think of snowflakes as taking this shape, do we?

How Are Snowflakes and Snow Crystals Formed?

Read How Snowflakes Are Formed for more about how these beautiful snow crystals grow, from the initial condensation of water vapor around a speck of dust in a cloud, to how they grow in different mini-environments as they fall to Earth.

For a more in depth discussion on all facets of snow crystals and snowflakes, browse Kenneth Libbrecht's SnowCrystals.com.

Sterling silver snowflake earrings add a cool sparkle to your winter wardrobe, whether for a glitzy holiday party or out and about town in casual attire.

Here are a few beautiful and elegant snowflake earrings for special occasions. Some are made from white gold, with diamonds, and others are made of beautiful sterling silver.

How Are Snowflakes Formed?
How snowflakes form, from their inception as water vapor condensing around a piece of dust, to their growth as they fall through the atmosphere.

Make Your Own Paper Snowflakes
Instructions for making your own 6-sided snowflakes for decorations.

Fine Snowflake Ornaments
Bring the beauty of lacy snowflakes inside to decorate your Christmas tree.

Very fascinating photos. It's awesome to think that God gave us such beauty in such a fleeting thing as a snowflake.

How beautiful. We're expecting a bit of snow tonight. So I'll get a chance to check out some snowflakes. 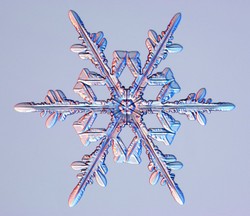 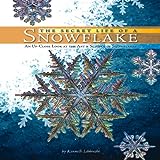 Have you ever thought about your life without electric light, mobile phones, radio? Nikola Tesla gave us many inventions that made our lives easier.
84%  13   6 curiousengineer
Scientists