Stockholm, the capital city of Sweden, is everything I expected it to be and more;clean, expensive, full of beautiful people, great health care and full of visitor attractions. Go!

My first mistake was expecting Stockholm to be very Viking. I was wrong ! Infact, Stockholm as a city was only founded a few hundred years after the Viking era. The original "most important town" in Sweden was Sigtuna and that is full of evidence of Old Norse and Viking life.

Both Sigtuna and Stockholm are based on the shores of Lake Malaren. In the Viking era this lake was an important bay leading out into the Baltic and across the seas from inland Sweden.

My husband's god-son lives in Sweden and offered us a stay at his Stockholm apartment and also his summer house by Lake Malaren. It was a hot, sunny and very beautiful ten days.

The water around Stockholm is very clean and very clear. The landing stage near the summer house is a good place for a daily swim.

Like all lakes, wildlife is everywhere, including seabirds, snakes and woodpeckers.

About two miles walk ( 40 mins )  from the summer house by Lake Maleran we found this castle.

The Swedish Royal Family  have a very relaxed open attitude to their life as monarchs and regularly walk around the city centre, unlike our British Royal Family who keep themselves separate from everyone,  all high and mighty.

I loved my visit to Skansen. It was the ideal place for me. Outdoors AND history!

Skansen is an open air museum and zoo which was originally founded in the late 19th C. The owners brought buildings from all over Sweden together and placed them at Skansen as a tribute to early life in Sweden. At Christmas the Stockholm Christmas Markets are held at Skansen.

Skansen has a nomadic people's Sami camp. They were lovely people and welcomed us into their home and gave us some of their food . It was very salty as it has to travel with no fridges!! We had hard salty cheeses and hams.

The Zoo at Skansen is home to local Swedish animals .

The Vasa was a Swedish warship built in the 17th C which sank on its maiden voyage yards away from the shore when King Carl Gustavus had sent for it in order to  support his fight against the Catholic nations in Europe.   As a show of strength the Vasa sailed with its canon holes open and a swell of water waves plus the fact that heavy Japanese wood had been used in construction meant that the ship sank within minutes, a few hundreds yards out to sea.

An amazing museum has been built around the ship which is beautifully preserved.

Derdriu.thank you for contributing … there are several beautiful walks and beauty all around. Stockholm is a comp!etely different way of life. I loved it.

Veronica, Thank you for sharing your Lake Maleran and Stockholm visits with us! Swedish friends say that there's an extensive, lovely network of walks that give close, good views of aristocratic and royal properties. It's an expanded version of the Lake Geneva walk-about in Wisconsin.

The Stockholm Christmas markets this year, for those who are interested or able to go are on from 21 Nov 15 to 23 Dec 15

Yes Stockholm is a beautiful city and the people were very kind and welcoming.

Lovely photo tour of Stockholm. I especially like pics of the wildlife.

Great question. My husband's god son is English and whilst working there in Sweden met his lovely wife. They are both completely bi-lingual and fluent.

Their summer house by Lake Maleran is complete peace.

I felt very privileged to go to Skansen and see how traditional life was and meeting and receiving hospitality from the Sami people was a very humbling experience.

It's lovely that you got to spend some time in the countryside and in Skansen as well. Is the person you visited British or Swedish?

Yes it is beautiful. The Swedish food was ok nothing remarkable. But the whole place is super clean. There is plenty to do and to see. I would like to go to their Christmas markets.
Their health system is remarkable and when I needed medical attention, I got it free.
We also found a RC church and there aren't many in Sweden but they were very welcoming.

I am hoping for another invite. :)

It looks like you had a wonderful trip. Stockholm sounds very nice and looks very interesting from your pictures. 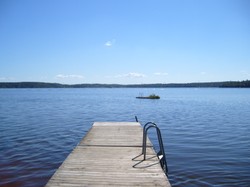