Sunflowers make for great jewelry. Here's a selection of sunflower necklaces, earrings, rings, and bracelets in silver and gold, along with some notes on sunflower symbolism.

Ever since I was a child walking in a field of sunflowers or passing them by in a car, I loved the way these flowers turned their heads to follow the sun. Also, the yellow of the leaves and the contrast with the head and seeds were supremely beautiful.

The Russian-born artist Wassily Kandinsky comments in his slim volume Concerning the Spiritual in Art on the opposition between yellow and blue and the movement inherent in them. He says that yellow moves towards the spectator and has a "parallel in the human energy which assails every obstacle blindly, and bursts forth aimlessly in every direction," while blue retreats, adds depth, and creates a sense of rest.

What Kandinsky calls "the first antithesis" is actually the opposition between yellow as the quintessential warm color and blue as the benchmark cold color. It's an opposition that appears in treatises on color far and wide.

Yellow, Associated with the Sun, Zeus, and Emperors

In mythology, Zeus mates with Danaë in the guise of a golden shower that enters her chamber, where she is locked up by her father, King Akrisios of Argos, after an oracle predicted that he would be killed by her daughter's son. Danaë bears Zeus a child, Perseus, for which she is punished by her father: shut up again, this time with her son, into a chest set adrift in the sea.

They survive and Perseus gets to accomplish many deeds of heroism, the most celebrated of all being perhaps the beheading of the Medusa, a Gorgon with snakes for hair whose gaze petrified any onlooker (Perseus manages to kill her as she was looking away).

In the realm of fairy tales, there's the Green Emperor and the Yellow Emperor, one symbolizing youth and the other maturity. They are present quite often in Romanian tradition – speaking of which, there's also, of course, the legendary Yellow Emperor in China, considered now to have been a historical figure. When exactly he ruled is still a matter of debate.

Yellow was an imperial color in China. During the Ming and Qing dynasties, only the imperial family was allowed to use it – on their clothes, carriages, and in the decoration of their buildings.

Yellow is associated with the earth in the Chinese tradition, so what is more beautiful than a sunflower reaching up from the earth and vying for the attention of the Sun, a link between earth and sky.

Sunflowers symbolize both an active principle (the Sun) and a passive one (the flower). The chalice of flowers receives sunlight, rain, and dew, being as such a receptacle of heavenly power.

Yellow, the Sun, and Spirituality

Yellow is the color of maturity and the beginning of decline, and it appears that Buddhists may have used yellow as the color of their robes to symbolize renunciation, elimination of desires and attachments precisely because they associated it with falling leaves. But yellow is also the color of the Sun, and the light of the Sun symbolizes the spirit, intellect, and knowledge. Then Christ was strongly associated with the Sun in early Christianity. The altar of a Christian church faces east, where the Sun rises.

Gold is, of course, associated with the Sun. This star is also symbolically linked with certain flowers, birds, and animals (the lotus and the sunflower, the eagle, the hart and the lion, etc.).

Sunflowers are heliotropic, which means that before they are fully formed and pollinated, they turn their heads 180 degrees and back every 24 hours following the sun from east to west and then back to the east. They are also bright yellow -- the kind of yellow we ascribe to sunshine at noon. Hence the sunflowers' association not just with the Sun but also with sunshine as it's perceived here on earth. From this symbolism there's just one small step toward making sunflower jewelry with the loving phrase "You are my sunshine."

I hope you'll enjoy the silver sunflower rings below with this phrase as well as the sunflower bracelets I've chosen for this article. I especially like the yoga chakra bracelet with gemstones, but the one to the left is special too: dainty and cute.

And I also hope I've added to your appreciation of sunflowers.

Sterling Silver "You are my sunshine" Sunflower CZ Ring, $26.99

Being a lover of sunshine, the sunflower is my favorite flower, and both the sun and its flower make wonderful jewelry, as you shower us with here.

I agree that sunflowers make for great pendants. I especially like the gold and diamond sun necklace. I also really like flower pendants.

Mira, Sunflowers translate gorgeously into jewelry. The devotion of sunflowers to the sun is an enchanting sight for children and gifts them with sunny memories which last a lifetime.

Thank you, Shraddha! I should probably look for more sunflowers with gemstones. Great idea. Thanks!

Love the beautiful sunflower and jewelry inspired by the blooms. Yellow colour, sterling silver and gemstones are my favourite.

Yes, it's a beautiful time of year. There's a golden light over the fields and the grass and trees are still green. Thank you, Claudia, for your words.

These are beautiful pieces of jewelry! This is the time of year when the plants are producing their wonderful seeds. I have seen many growing around here.

Yes, there are some nice sunflower jewelry designs out there. My favorite right now is the diamond sun pendant.

Thank you for your comment, Tolovaj! You know, I actually make a sauce with sunflower seeds and fresh or puréed tomatoes -- my favorite recipe also includes garlic, ginger, and coriander seeds (and olive oil and a bit of salt). I love sautéing sunflower seeds in olive oil and using them this way. I agree, nuts and seeds like sunflower seeds should be consumed quite often.
Glad you like the sunflower jewelry! :-)

Drink Tea and Let It Be, and Other Fun and Inspirational Tea S...

Playful, fun, and funny tea slogans and taglines, quotes and quips, that will... 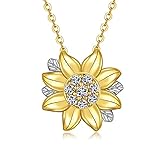 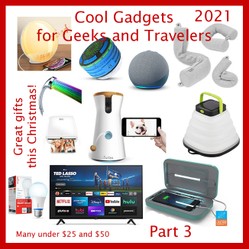 Useful and fun travel gadgets and geeky gizmos, great Christmas presents this year, many of them bargains at $45 or less, for the inner geek and traveler. Updated Nov. 2021.
98%  33   8 Mira
Coffee & Tea 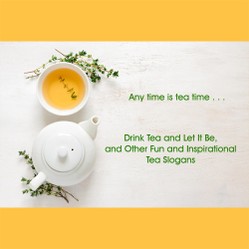 Drink Tea and Let It Be, and Other Fun and Inspirational Tea Slogans

Playful, fun, and funny tea slogans and taglines, quotes and quips, that will appeal to serious tea lovers
Loading ...
Error!