You will be amazed to know that there are more than 750 symbols linked to the 200 most popular festivals celebrated in the world and America today.

Each symbol associated with Halloween echoes traditions, historical evolution and the importance of understanding natural phenomena through anecdotes that were created by our folks who in their wisdom tried to grasp the meanings of such occurrences.

In ancient times, people were afraid of catastrophic events, most of these natural disasters required science to explain their occurrences. In absence of scientific theories and explanations, people assumed they were caused by spirits, demons and the Lord of Death. In order to please the spirits, they offered flowers, food and various other gifts.

There came the rituals, the myths associated with every custom. People celebrated the festivals on harvest days and they were unique for people belonging in different parts of the world.

Black colour denotes darkness, witches, black cats and dark nights. Black stood for all gory things and Death. Orange comes from the orange of pumpkins. Pumpkins were harvested during fall and hence they symbolised harvest, Fall festivals and Halloween. It was also the colour of flames, and fire related to the rituals of Halloween conducted by Celtic Druids.

Carving pumpkins is a ritual that came from practices followed by Celtics and witches. It is the face of Death. The ritual goes back to the middle ages when the natives of British Isles chopped the top of the pumpkin, made a hollow inside and lit a candle in the hollow.

It became Jack O lantern signifying the icon of Dead, the spirits that got released from hell. Jack also originated from a story where there is the Devil himself terrorizing commoners. Jack is a smart guy who tricks the Devil to surrender. A flickering Jack O lantern thus was used to ward off demons and spirits.

In ancient days a flickering simmering light in distance occurred in uninhabited bogs, swamps and grasslands. This dim swaying light looked like a soul wandering in the dark, they tricked travelers into the swamps. The gas that inflamed and the event gave rise to another symbol of Hallows eve – ‘Jack O lantern’.

They could also transform them into black cats. The Wiccans practiced witchcraft and they would often meet for secret meetings called Sabbats. There are people out there who think they are successors of Wiccans and meet on Halloween for rituals.

Witches are often pictured in black with cats and broomsticks. Ancient women used poles similar to broomsticks to vault streams and ditches. It looked as if they were flying on broomsticks. Hence broomsticks similar to feathers became symbols of Halloween and the witch.

Like bats, the black cats were also related to the sinister occult reputation stemming from the folklores. There are superstitions attached to the black cats crossing your way and the magic of black cat bones rooted from ancient German myths.

Poor bats, much to our dismay they have got associated to evil because of their habits. They live in dark caves and their roost lie in gloomy dilapidated ruins which are ghastly. The bats are one of the most popular Halloween symbols, you will find them in old folk tales and myths.

Their long connection to the evil stems from the fact that they represent death and sorcery in various traditions followed by the Celtics who lived around thousand years ago in British Isles before the invasion of Romans.

In the medieval times, witches would gather around the Samhain fire to perform witchcrafts, the bats would get attracted to the mosquitoes who would surround the fire. They would fly to the fire place to eat mosquitoes and other insects. This ensured their place in the Halloween’s eve.

Black cats and bats aren’t the only animals that have close connection to Halloween. Other nocturnal bird who is linked to the spirits is the Owl. Owls were thought to be the bad spirits who came to people who were dying, they came to consume their souls. Their mournful piercing cries were bad omen, it was the announcement of someone bound to die. The hair rising hooting cries of the owl were also thought to be a clear signal to summon evil spirits. The bad reputation gave owls a symbol to evil and hence they acquired a special place in Halloween symbols.

Ghosts form a major part of all cultures. Human minds are perplexed and fail to explain their existence through modern science.

They are present in all folklores. They are troubles spirits who are unable to come out of their misery and therefore spread fear and misery in other people’s lives. Important part of Halloween festival, they are there to entertain with the fear factor.

Which Halloween symbol is your favourite?

I prefer owls and as I can see they are becoming more and more popular in various areas of life, as decorative elements and so on. I have recently written an article about Halloween too and found many interesting similarities between celebrations in different parts of the world. Death still fascinates us and it will very likely stay the ultimate secret for future generations as well.

@frankbeswick : An interesting observation - the chances of Halloween turning Holy or Saintly did not happen, somehow Samhain made sure that wandering spirits and ghosts were celebrated. It was a way to ward off evil by disguising as ghost thinking that the devil could be fooled. It definitely ensured the way we celebrate Halloween today.

@younghopes - Thanks for pinning. There are more that would have gone as symbols of Halloween - goblins, ghouls, skeletons, grim reaper and so on but I had to limit them as the article would become too long.

Halloween means Holy Evening, and is a medieval Christian term for the old Celtic feast of Samhain [pronounced Sow en in Irish.] At Samhain the Celtic peoples believed that the barrier between this world and the other, the realm of Faerie or the Sidhe, was at its thinnest, so spirits could wander from their world to ours. So people dressed as ghosts etc to manage their fears and magically control this dangerous time. Christianity took up the old pagan sacred year and made the day after Samhain All Saints Day, that celebrates all the holy people gone before us, but the tradition of Samhain survived and became known as Halloween.

This is an amazing article, so much of information which i have never known before, i am pinning this to my board- halloween party

Every year October brings with it the gory stories of ghosts and spirits, an ...

Halloween Animated Decorations with Spooky Sound and Motion An... 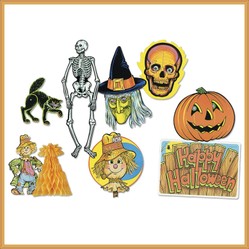 Angels and Devils in the Landscape of Halloween2 days ago 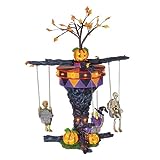 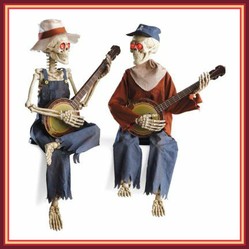 Every year October brings with it the gory stories of ghosts and spirits, an avalanche of Jack’O lanterns, mutilated skeletons,eerie tombstones,graveyards and spooky haunted props.
26%  1   3 WriterArtist
Halloween Decorations 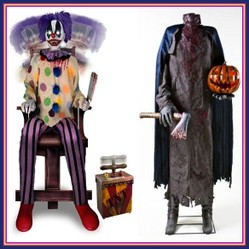 Halloween animated decorations can produce the rare, spine-chilling effect that can be quite scary and unpredictably menacing.
Loading ...
Error!