A look at a range of South American plants and natural resources and their benefits with a particular focus on 'boldo' which is a plant taken in the form of tea.

Today’s article is going to be focusing on the large assortment of fauna and flora native to South America especially focusing on a particular shrub native to South America.
In today’s world we like to be constantly finding new ways of doing things and researching new methods and new concepts when in fact the vast majority are based on ones that have already existed for centuries before. South America has a splendid variety of dishes and condiments taken straight from nature itself used as part of the normal everyday diet or in many cases for homeopathic purposes too.

In today’s world we like to be constantly finding new ways of doing things and researching new methods and new concepts when in fact the vast majority are based on ones that have already existed for centuries before. As I have mentioned before in a previous article South America has a stunning variety of dishes and condiments taken straight from nature itself used as part of the normal everyday diet or in many cases for homeopathic purposes too.

The indigenous people native to both Chile and Peru, have long used their natural habitat to sustain them whilst at the same time sustaining their natural habitat creating a circle of respect and preservation of both culture and wildlife. Unfortunately during the ages past respect for nature had somewhat dwindled with the loss of both wildlife and indigenous culture. However, in recent years a new respect for both has once again dawned and it seems as if we are once again beginning to become aware of the world around us instead of just using up resources with newer and faster technologies.

There are many different plants in North and South America used with regards to their culinary and homeopathic properties for example like Yerba Mate particularly prevalent in Argentina and Paraguay, the pink trumpet tree known as lapacho typically used during winter months to reduce flu symptoms and culantro (not cilantro’) used as a culinary herb but also doubling up as a remedy. These are among some of the most popular remedies but are by no means even closely reflective of the great and numerous range of plants native to this continent which many indigenous tribes have grown and employed within their daily lives over many centuries.

One of the most commonly known in South America but the least celebrated is an evergreen shrub named ‘Boldo’. However, knowledge of this somewhat spectacular plant is lacking outside of the continent and certainly in North America. The leaves themselves of the boldo tree resemble a little to bay leaves however with an entirely unique essence. Boldo in its most common form is used in tea and has been for many years perhaps stretching back to the ancient Incas who lived in South America. It has a resilient piney and almost spicy flavour to it. It also has a mildly bitter taste to it which can make it disagreeable to many. However, many who find themselves restless with trying only traditional teas and consider it appealing to try new tastes love the distinct palate and strong tang of boldo.

As was mentioned before boldo tea is used not only for its unique flavour but many people use it to promote a healthy lifestyle although over usage is never recommended as goes with traditional tea and coffee too.  It is considered affective in protecting the liver and also fuels activity in the liver by increasing the production of bile. It is also extremely beneficial for stomach problems too. Not only this but when used in reasonable quantities it along with green tea is considered a natural immune booster with many antioxidant properties. Although it must be said that pregnant mothers and those taking medicine are discouraged from drinking this tea.

The plant although native to South America can be obtained in many other parts of the world as tea bags although it could prove to be somewhat of a difficulty to find it fresh. I have never seen boldo tea sold anywhere in the UK to my knowledge ( fresh or as tea bags) although perhaps there is in an international food shop in places like central London that sells it. I have yet to come across one myself. I usually bring packets back when returning from Chile.

However, although this article seeks to make people aware of the benefits of different types of lesser known teas especially in the western wold it also seeks to make people aware of the benefits of fresh tea and organic or bleach free tea bags. Steering clear of anything not organic is highly recommended.  Many tea-drinkers are oblivious to the fact that the standard tea bag undergoes the process of bleaching in particular chlorine bleaching.  Epichlorhydrin is also a commonly used substance in tea bags and what most people don’t know is that it is actually a pesticide. Either way both of these substances do absolutely no good to the human body and must be avoided although I understand how hard that can be we do need to make certain decisions to protect ourselves because although one tea bag may not be enough to cause cancer over the course of a year or several you may be doing more damage than you think.

South America is a wonderful place filled with many beautiful, exquisite and beneficial plants and I hope that you too will have the opportunity to try at least some of them and experience some of the benefits for yourself. I also hope that this article has provided you with a little snippet of information about these plants in particular boldo and that it has inspired you to research and look into some of them yourself. You never know what hidden treasures you will find.

I like, no I LOVE tea, this is a very interesting tea, I enjoy learning more about tea. Here's to good health and tea brings good health. 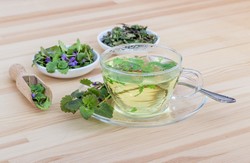 Having lost weight, I am a little anxious about the approaching season and have been looking at ways not to regain it over seven days eating. A bit of research was needed.
Loading ...
Error!