Ten-ounce silver bullion coins are becoming more available, with an increasing variety. There must be a reason mints like the Royal Mint and the Royal Canadian Mint produce them.

Why Not Make Even Larger Coins?

Coins must appeal to a market.  Whether a coin is bought by someone purchasing bullion for its metal value, or by a numismatist, it must be stored safely.  It must fit in a bank safety deposit box, or into a home safe.  Larger coins can limit the number of potential customers.

The Advantage of Large Coins

Large coins, in addition to being economical, have larger surfaces, so one can see the beauty of the coin’s design better.

The Royal Mint has issued three ten-ounce silver bullion coins in 2019.  The third and fourth ten-ounce coins for the Queen’s Beasts series are the Black Bull of Clarence and the Unicorn of Scotland.

In addition, the Valiant, a silver bullion coin that first appeared in 2018, has an updated version for 2019.  It depicts Saint George slaying the dragon.

The Royal Mint has a website for bullion at Royalmintbullion.com.

The Perth Mint in Australia mints two ten-ounce silver bullion coins for Australia.  One is the Pig, the current coin in its second lunar coin series.  The other is the ten-ounce Kookaburra, an extremely popular silver bullion series.

The Royal Canadian Mint has a new silver bullion coin, the ten-ounce Magnificent Maple Leaves.  This coin features a pair of maple leaves on a single twig.  The coin is spectacular, as are many Canadian bullion coins.

Armenia has a bullion design showing Noah’s Ark, with a wide range of sizes, including the large, ten-ounce coin.

The bullion coin for Somalia is the Elephant, a coin that changes design annually.  This coin comes in a variety of sizes, including the ten-ounce coin.

Notice that the United states Mint does not currently have a ten-ounce silver bullion coin.  This is a disappointment.

A properly sized capsule can offer a coin both physical protection and environmental protection.  It is a worthwhile addition. If the coin does not come in a capsule from the mint.  If the coin is in a capsule, it is wise to not open the capsule unnecessarily.

The introductory image is our own.

blackspanielgallery, Thank you for the practicalities and products. Does it look like the United States might start minting a 10-ounce silver bullion coin in the near future? Is there any indication as to why the United States has not done so thus far? You mention that "striking a ten-ounce coin should be cheaper to produce per ounce than smaller coins." Would the United States prefer to stay away from small-coin and 10-ounce minting? 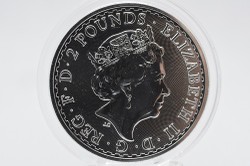