The Arabian Contribution to the Thoroughbred Horse

In England 400 years ago, the speed and endurance of imported Eastern horses exceeded that of Britain's racers. Crossbreeding them led to a superior racehorse: the Thoroughbred.

Arabian horses had been coming to Britain since the second century AD, when Emperor Septimus Severus sent several desert horse to what was then Britannia. Others arrived as gifts to royalty, as purchases and as spoils of war over the next 400 years. By the late 1600s, the Eastern horses were being imported specifically for breeding better racehorses and improved cavalry mounts by both royalty and commoners. These imported horses came from a variety of bloodlines. There were greyhound-like Akhal-Tekes and Turks and desert-bred Arabians and Barbs. These elegant Eastern horses came from Morocco, Algeria, Tunisia, Libya, Egypt, Syria, Arabia, Turkey and what are now Iraq and Iran.

The seventeenth- and eighteenth-century horsemen of the British Isles made little distinction amongst the different strains and bloodlines of their new horses. Most were designated by type — Arabian, Barb, Turk, sometimes based on locality rather than actual breed — but the various strains were ignored, as were the pedigrees, since those were usually transmitted orally or occasionally written in Arabic. But once the horses arrived in Britain, records were kept of matings and offspring. In 1791, a General Stud Book was established and published in which names and pedigrees were written down. Although the accuracy of the pedigrees and the horses being identified was often in doubt, at least an attempt was being made to keep records.

Eastern blood was added frequently in the early years of the Thoroughbred's development. The stamina and soundness of the desert horses was an important ingredient in creating the perfect racehorse. The offspring of the English and Eastern horses often were larger than either parent and exhibited a hybrid vigor that made them superior runners.

Today, there are only three “tail-male” lines of descent (son to father to paternal grandfather etc. in an unbroken male line) to three of the original Eastern horses: The Darley Arabian, the Byerly Turk and the Godolphin Barb. But there were many other named Eastern horses used in the creation of the Thoroughbred, and many can still be seen in other parts of modern racehorse pedigrees when traced back far enough.

King Henry VIII imported many “Barbary” stallions and mares in the early 1500s and bred them at random to his other horses. Racing was very informal and pedigrees were not kept. His daughter Queen Elizabeth I was more methodical and brought in breeding experts to manage her racing stud farm. Many breeds and crossbreds were used in racing at this time, but it soon became apparent that the “Barbarian” horses from “Tunnis” were much faster than the native British types.

One of the first was the Markham Arabian, purchased by King James I in 1616. Over the next few decades, mares and stallions of Eastern blood were imported. Most were referred to as Barbaries. An inventory in 1649 of the 139 horses at the Royal Stud at Tutbury included descendants of some of the early imports, one stallion and several mares from Morocco and several Arabians. Some were mixed-breed descendants of the Markham Arabian.

Cromwell imported several Eastern horses to use for breeding chargers, among them Place's White Turk. Additional importations followed, including Helmsley Turk, Fairfax's Morocco Barb and two unknown Arabians and/or Barbs who together produced an English-born Arabian/Barb mare called Old Bald Peg. Most of the imports went unnamed or only were identified by the name of owner. Among the most important were the White-Legged Lowther Barb, the Straddling Turk (also called the Lister Turk), the Darcy Yellow Turk and Darcy White Turk. Some of these were captured in war. The Curwen Bay Barb, the Toulouse Barb and St. Victor's Barb (or Turk) were imported from France, the first having been a gift from the King of Morocco to King Louis XIV.

Others brought via France included the Belgrade Turk, Bloody Buttocks (a grey with a large blood marking on his hip) and Croft's Arabian, but there were many more. Eastern horses were all the rage. The Stud Book lists 103 imported stallions, but it appears that the real number is between 160 and 180. It is difficult to be sure since the horses often changed names every time they changed owners. As for the mares, it is unknown how many were imported, but various accounts suggest between 50 and 80.

The Darley Arabian (left) and the Byerly Turk

The “Big Three” — The Darley Arabian, the Godolphin Barb and the Byerly Turk

The Darley Arabian, foaled in 1700, was bought in Aleppo by a local merchant named Thomas Darley, who sent the horse to his brother Richard in Yorkshire. The Darley's son Bulle Rock was the first Thoroughbred sent to America. More importantly, The Darley was mated twice with a mare named Betty Leedes, who was 100 per cent Eastern blood (Turk, Barb and Arabian). The resulting full-blood Eastern colts were Flying Childers in 1715 (the best racehorse of his time) and Bleeding Childers (renamed Bartlett's Childers) who could not be raced because he suffered from pulmonary bleeding, a disorder that he apparently passed on to today's Thoroughbreds. Many modern Thoroughbreds trace directly back to the Darley through these two brothers.

The Godolphin Barb was a brown horse said to have been discovered pulling a water-cart in Paris and eventually sold to Lord Godolphin. He was born around 1727 in Yemen, sent to Syria and then to Tunisia, and finally sent as a gift to the King of France. Whether the cart story is true is unknown, but he did end up owned by Lord Godolphin. Despite siring fewer than 100 foals, he is in every Thoroughbred pedigree, primarily through his sons Cade (sire of Matchem) and Regulus (broodmare sire of Eclipse).

The Byerly Turk was captured in battle in 1686 by Lord Byerley, who used him as a charger in Ireland. He was bred to Arabian, Barb and mixed breed mares. The horse's name was famously misspelled in the General Stud Book. His male bloodline survives through the famous racehorse Herod.

The undefeated Flying Childers, bred in England but 100 per cent Arabian by blood

Overall, the last “Thoroughbred” racehorse of 100 per cent Eastern blood was Flying Childers, according to author Roger Longrigg. After that, all Thoroughbreds had at least a touch of non-Eastern blood, which Longrigg suggests stabilized at around 30 per cent. That makes the modern Thoroughbred about 70 per cent Eastern, assuming the genes from the English horses remained constant over the generations, which of course they might not have done.

It is just as likely that the Arabian influence has actually been strengthened through selection, since the traits of the modern Thoroughbred are amazingly like those of certain Arabians. The late Lady Anne Blunt of the renowned Crabbet Arabian Stud (founded 1877) commented that her mare Hagar was very much akin to a Thoroughbred, despite being of the purest Arabian blood.

“She was not remarkably handsome, being straight necked and having a strange, wild head, but her depth of girth and her long muscular hindquarters gave promise of what she possessed in a wonderful degree, speed and staying power,” Lady Anne Blunt said of Hagar.

Hagar's daughter Haifa, plain by Arabian standards, could have passed as a Thoroughbred based on her physical appearance. Indeed, the first six Arabians the Blunts purchased in 1878 had a more Thoroughbred appearance about them than their later purchases.

Lady Anne Lytton, the daughter of Lady Wentworth (Judith Anne Dorothea Blunt-Lytton, 16th Baroness Wentworth) and granddaughter of Lady Anne and Wilfred Scawen Blunt, continued the family's interest in Arabians and wrote extensively about them. She observed that not all Arabians were pretty, dish-faced horses with arched necks.

“The taller, plainer type came from the desert as well, but but had a longer, straighter head, with a smaller eye and the quarters were less level and the neck not curved; nevertheless they had a look of distinction and were undoubtedly pure bred,” Lady Anne Lytton wrote.

Some of the Arabian horses of Crabbet Stud in the late 1930s and Thoroughbreds of the same period can be seen in this Pathé newsreel.

Regarding the Thoroughbred, Lady Anne Lytton noted, “Where else did that fine Thoroughbred type come from but from the Arab himself? Bred for speed alone, he has developed over the years characteristics rather like the greyhound, and I have no doubt that if we selected our Arabs to race and made that the only consideration, he would develop on the same lines.”

She was right. Modern Arabian race horses bear a close resemblance to Thoroughbreds, differing mainly in running slower times, generally smaller size, and the occasional flagged tail or dished face. At the same time, there are still Thoroughbreds with these Arabian features. The stakes winner Dark Mirage only weighed 710 pounds and, while officially a bit over 15 hands, was generally described as being closer to 14:3 hh. The great stallion Northern Dancer was equally short. Perhaps modern Thoroughbreds owe more to their Eastern ancestors and less to their English ones than was once believed.

For a closer look at the pedigrees of early Thoroughbreds and the more recent registration of Arabians in Thoroughbred stud books, please read the follow-up article Arabians and Thoroughbreds: Two Types, But Related By Blood.

Eclipse was at least 15/16ths pure Arabian by blood.

Many Eastern horses (Arabians, Turks and Barbs) were included in the first Th... 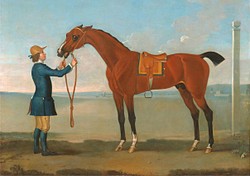 King of the Wind: The Story of the Godolphin Arabian
14%  0   2 TerryMcNamee
Thoroughbred Horses 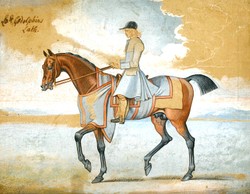 Many Eastern horses (Arabians, Turks and Barbs) were included in the first Thoroughbred registry, the General Stud Book, since they were used to create the English Thoroughbred.
47%  1   6 TerryMcNamee
Thoroughbred Horses

Thoroughbred come in many colours, but none was as spectacular in colour and ability as a spotted grey stallion named The Tetrarch, who began his racing career 100 years ago.
Loading ...
Error!