The Bard's Tale was a Playstation 2 and PC adventure game released in 2004 by InExile.

The Bard's Tale was an adventure game released in 2004 by InExile.

The anti-hero (voiced by Cary Elwes) is the type of gentleman to turn down a chance to save the world in order to scavenge cash and chase the ladies. Perhaps it's just as well that the princess who asks him to save the world is beautiful, but then there's always the slight problem of him getting distracted along the way...

About the Bard's Tale

The Bard, our eponymous anti-hero, travels from place to place conning the locals out of their coin, and occasionally trying to get into their beds. So when a beautiful princess asks him to be the next hero to try to rescue her it is rather unexpected (apparently all the better candidates have died trying). After some intense negotiation over rescue rates, the Bard sets off on his new quest - that is, if he can take his eyes of gold and women long enough to remember it...

The Bard's Tale is an excellent mix of RPG, action and black humour, which should appeal to most gamers. It has a well-written script and strong storylines and characters supported by standard gameplay and graphics, with surprisingly good sound. The voice acting in particular is superb, particularly Cary Elwes as our not-so-noble hero.

Aside from sarcasm, the Bard's main power is summoning creatures to fight or perform tasks for him, although if needed he can fight with a good array of weapons. Unfortunately these creatures can be less than reliable. Witness the trapper, whose job is to throw himself on traps so the Bard does not get damaged - or sometimes to stand back, snigger, and let the Bard take the fall.

What really makes this game is the humour and, believe it or not, the songs. Self-aware, delighting in twisting genre tropes, and compared to Monty Python by some reviewers, there are many laugh-out loud moments in this, not least from the three little goblins who follow the Bard around with a cheerful chorus of "it's bad luck to be you."

The graphics are reasonable but not outstanding. This is true of both the gameplay and the cutscenes, although the occasional "Bard's eye view" and good direction mean the cutscenes are immersive, and generally there is a good balance of cutscene to gameplay. Unfortunately the game's main weakness is the gameplay. Played as a top-down action game, some levels are dark enough that you cannot see where you need to go, or get hung up on obstacles you can't see. Some of the camera angles contribute to this problem. It is also possible to have problems with smaller enemies being blocked by your larger sprites, making targeting difficult. Because of the way the levels are laid out, it can be very difficult to spot enemies and move around obstacles. In combat this can be fatal. The summon creatures are good, but their AI is fairly basic, leaving the Bard as your main fighter in several battles.

The sound is excellent, and a particular highpoint of the game. As well as strong voice acting, it has good atmospheric effects and background music, which adds to the game and atmosphere. This is particularly true during the songs and performance sequences.

It has a reasonable play length, and lasts about 20 hours. There are numerous paths though the game, and the number of hidden quests and a few endings give it reasonable replay value. However before replaying it, you may want to give it a few weeks to get the songs out of your head.

This game should have broad appeal. RPG and fantasy fans should enjoy it, but so should survival horror and action players looking for the sarcastic side of their hobby. Some sequences may be disturbing to younger players, and the smut and language definitely targets an older audience, but gamers in their teens and up should thoroughly enjoy it.

As the game has been available for a while it should be available from most game stores on their budget titles, and at less than £15 it is definitely worth getting. The Bard's Tale was originally released for the PS2, but has now been released in a variety of formats, including Xbox and PC.

Like any videogame it is affected by region coding. European gamers can find it for their region on Amazon UK, here:

The Bard's Tale is also often available through eBay. If you are lucky you might even find the 1980's NES platformer of the same name (unfortunately there's no singing in that one though.)

What would you choose?

Do these voices sound familiar?

If the Bard and the Narrator sound familiar, they should. They are both voiced by well-known actors.

Best known for the Princess Bride, and the Saw series, Cary Elwes is a well-known star. Normally he plays the hero, but the Bard is anything but. Snarking at the narrator, the cast and the world in general, the Bard's cockney accent brings the character to life.

Often playing villains like Megabyte from Reboot, and Judge Frollo on Disney's Hunchback of Notre Dame, here he plays the often-disgusted voice of sanity and ethics to the Bard's determined pursuit of treasure.

InExile have kindly made a selection of the music from the Bard's Tale available for free, to listen to online:

It's bad luck to be you

Sung by the trio

Strategy Guides for The Bard's Tale

The official and unofficial guides

Here is the official guide to the game. I'm sure this won't stop some of you doing as the Bard would and going for the cheap option at GameFAQS, of course. The main reason for the strategy guide is on second replay, to find out what you missed by being too polite, or too snarky, to the wrong people.

Played it? Liked it? Can't get that blasted song out of your head?

Or do you think I need to add more to this article? Regardless, this is the place to have your say! 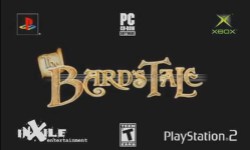 What if you could only have one Nintendo Entertainment System Game for every year of the system's life? Which would you choose, and why? Here's my personal pics!
22%  5   1 tirial
Classic Games