I purchased a Syma S107 radio control helicopter for my husband this Christmas. He absolutely loves it and is having so much fun with it.

At our mall, there is always a booth selling radio controlled helicopters. Anytime we would pass it, my husband would stop and watch them fly the helicopter. It is not something he would ever buy for himself, so this year I decided to purchase him one for Christmas. He is a "Big Kid" at heart and I just knew he would love it.

I talked to the salesperson at the mall to find out some details about the helicopters and to ask him how much they cost. He told me they cost between $60-$179 depending on the size. However, since I like to be a more educated shopper, I decided to do some research before I made a purchase.

My Search for the Best Radio Control Helicopter

I went online and looked at all kinds of radio control helicopters; big ones and small ones, expensive ones and inexpensive ones.   I wasn't sure if I wanted a helicopter that could be used indoors, outdoors or both.  After my research, I discovered that the majority of these helicopters did not fly very well outdoors even if they were rated for outdoor use.    The slightest amount of wind could cause you to lose control and crash.

When I was finally done with my research, I decided to purchase the Syma S107 Radio Control helicopter.  This palm sized helicopter is a top selling radio controlled helicopter and it is consistently on the Bestselling Toy List on Amazon.   It is rated for indoor use.  And at less than $30, I knew I had to give it a try.

About the Syma S107 Helicopter

The Syma Helicopter is a Big Hit with my Husband

My husband was very excited when he opened his present.  He said he had always wanted to get one of these helicopters.    As soon as all of the presents were opened and the helicopter was charged, he flew it for the first time.   His first flight was very good considering he had never flown one of these helicopters before.   He was impressed with how responsive it was and he had a lot of fun with it.   The kids enjoyed watching him, too.

The manufacturer says the helicopter is virtually indestructible and I have to vouch for that.  My husband has crashed it numerous times and it just keeps on going.    The box says ages 14+, but my 10 year old flew it and she did pretty good.  So, younger children can enjoy this helicopter as well.   When my family came over for Christmas, my husband could not wait to show off his new toy.  Everyone thought it was the coolest thing.

There is only one negative thing about this helicopter.  My husband has now decided to use it to torment our bird and to see how close he can fly it over our heads.  As I said, he is a Big Kid at heart.

That being said, I highly recommend this radio control helicopter.

My hubby and kids love these - funny u have this up my son just bought one 2 days ago, but his cost $120 bucks and my hubby is doing his own write on on it on his blog.
We have had so many of these in our home over the years, but they cannot get enough of them - so much fun !!!

I bought one of these for my hubby a couple of years ago, too. He liked it but spends little time playing with it. Too bad. Even big boys need time to play. 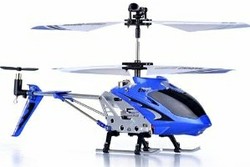 Does every single Disney Princess have to be hot to trot? Good grief. Why couldn't they leave Merida alone? She was SUPPOSED to be different!
100%  23   10 HollieT
Popular Themed Toys