The Doctor Who Comeback With Christopher Eccleston and Billie Piper

Doctor Who disappeared back in the late 80s but made a comeback in 2005. Find out how Eccleston and Piper ushered in a new era of Doctor Who.

Doctor Who had been on hiatus for about 15 years, and made a comeback in 2005, in the form of Christopher Eccleston as the 9th Doctor. He was rough around the edges, the guy next door, the guy down at the pub, a total departure from every other Doctor who has always taken on mythic proportions. Rather, Eccleston was the ordinary guy Doctor. And the tough guy. Clad in a leather jacket, he made the Daleks and other terrifying space villains stand down. Probably the only Doctor that everyone could relate to on some level.

The new series also introduced us to Rose Tyler, played by Billie Piper, at once a frustrating brat and a young woman maturing before our eyes. Insensitive to her directionless boyfriend Mickey, she chose the road less traveled, she chose to join the Doctor on his adventures through time and space, through the dangers of space villainy, to escape the doldrums and ho-hum existence that had her imprisoned and desperate. During this time, we see Rose come alive and become truer to herself and everyone else. Of course, all with the assistance of the adventurous Doctor.

In addition, we are introduced to the immortal, literally, Captain Jack Harkness, with his risque and perpetual advances on almost everyone. He is the Space Cowboy, giving Captain Kirk a run for his money.

The first series is the series that brought Doctor Who back to television. It was so appropriately formulated to show-case the low-key but effective 9th Doctor, beautifully portrayed by Eccleston, and the blossoming Rose Tyler, often dramatically portrayed by Billie Piper, with all of the heart-ache and joy that a Doctor Who show always brings to the small screen; this was a series full of excitement, romance, humor and tragedy. Eccleston was stern at times but intelligent, serious yet funny, an imposing figure yet at times his presence was understated though energetic. Billie Piper was beautiful, passionate, innocent and vulnerable. The Ninth Doctor, it turns out, was the Doctor that had just come from tragic circumstances. Is it any wonder there is a darkness to him.

Truly more than a worthwhile collection for those wanting to be introduced to the series or those nostalgic for the show’s original return to television. 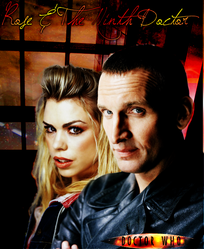