To me, Cheshire is the best of all English counties. Fine weather took me out into Cheshire again; this time for a walk on The Edge! Alderley Edge that is.

The Edge is a huge, red sandstone ridge or escarpment with a plateau on top which towers above the classy Cheshire village of Alderley Edge. In Cheshire "an Edge " is a name used for a piece of high land. Alderley Edge gives its name to the local village. The Edge is about 360 feet high.The Edge is shaped like a horseshoe / hough (pronounced huff), in Cheshire parlance.

It is owned by the National Trust and has a very long pre-history dating back to Stone and Bronze Age. The Children's author Alan Garner wrote a book "The Weirdstone of Brisingamen " based on the Legend of the Wizard and the folklore related to The Edge.

The unusual spell of good weather this week saw my husband and I out walking up and about The Edge. It was at its finest in gorgeous weather.

Even from the Carpark, there is a spectacular view. In fact wherever you stand on The Edge the view is excellent.

The legend about the Wizard

The legend about the Wizard is evident every where, even at the Tea Rooms. The building is hundreds of years old.

The legend we all grew up with round here says that a farmer was taking a white mare to sell at Macclesfield market. Whilst walking along  The Edge, an old man, a Wizard, clad in a long, flowing garment stopped him and offered the farmer money for his horse but the farmer refused, saying he could get a better price at the market.

The old man told the farmer that that no-one would buy the horse and he would buy it later that day. Indeed the farmer did not sell his horse and sure enough he met the Wizard on his way home.

The farmer followed the Wizard to the rocks which opened when he struck them with his stick. They entered the cave and  the farmer saw Knights and white horses, all asleep. The Wizard took gold and jewels from a chest, and paid the farmer. The wizard explained that the sleeping knights were ready to awake and fight when England was in desperate need and he was in need of one more white mare. The farmer left terrified.

Every year next weekend in fact, in May, Alderley Edge holds its May Fair for a weekend and it include a procession through the village with a Wizard on a white horse.

One of the walks

This gate from the car park leads up to the Wizard Tea Shop and the start of a lovely woodland walk. Our damp Cheshire climate means that the vegetation is lush and green. A charming, well spaced picnic area is just beyond the gate.

The woodland walk soon leads to The Beacon above. The Beacon is reputedly so called because in 1588 when the Spanish Armada ( fleet ) attacked Queen Elizabeth Tudor's fleet, a series of beacons was lit throughout the land when the Armada was defeated. This tradition of beacon lighting still happens in Britain as recently as last month for Queen Elizabeth's 2nd's 90th birthday.

On top of the stone monument you can see the inscription.  "The site of the Armada Beacon "

The pathways through the woods are excellently maintained and preserved by volunteers for the National Trust.  There are several beautiful walks, one of which looks down the side of The Edge into a gully ( small canyon) below.

The Edge isn't huge but parts of it are challenging and it is very good exercise to do a walk round it.

It may interest readers to know that Cheshire was once a county palatine, like Durham, which meant that it collected its own taxes. For a while it behaved as a semi-independent entity, so that Magna Carta did not apply to Cheshire, so its earl drew up a special Cheshire Charter at the behest of his barons. The county also administered the Welsh county of Flint for a time, but there was always vagueness about the Welsh-English borders until Henry the Eighth settled the issue permanently.

Plus, it has Castles. Roman forts, legend, myths, royal intrigue and lovely ancient villages pubs. I am its main advocate I think. :)

Cheshire is the quintessential English shire. It is green, rolling and beautiful.

Thank you Derdriu,
People in former times were terrified of anything resembling witchcraft and superstition. I always feel there is a grain of truth in every oral tradition and this legend has persisted for centuries.

As for North Cheshire being spectacular... I do agree. I feel truly blessed to be so happily and beautifully situated. I get out there walking as often as I can.

Veronica, Thank you for taking us on yet another of your spectacular English countryside strolls. Why was the farmer terrified -- instead of reassured -- by the Wizard's explanation of sleeping knights ready to be awakened to defend England?

Bronze Age mounds often served not only as graves but as territory markers to show who owned land. "It is ours for here are our ancestors' graves." But the small earthen mounds tend to erode away in the wind and the rain.

I suggest that Bronze Age remains may have perished in the huge rockfall that you can see near the Devil's Grave,which took away a chunk of slope some time in the past. There is still a seam of copper ore in the rock, so it is likely that that area was copper-rich, and it is possible that the ancient miners undermined the cliff, causing the rockfall.

A Bronze Age settlement was there that's for certain.

The National Trust have done a wonderful job in preserving it. It is free to visit too.

The Edge was bare until the late eighteenth century when it was planted with pine, though I suspect that the lower slopes were always tree-clad and contained remnants of the greenwood that used to cover Cheshire. Pine is not the vegetation native to the area. Since then natural regeneration has allowed several tree species to enter:holly , oak, rowan and birch to be exact, which are more natural to Cheshire. Birch is a prolific self seeder and sets in easily where it can. Some woodland flowers have entered, notably wood anemone and ramson [wild garlic.]

A variety of birds is found: I have seen jays there, and having seen nuthatches in nearby Styal woods, I am told and can believe that they are present at Alderley. The nuthatch is the only bird capable of walking down a tree head first.

If you visit, don't be seduced by the druids circle, it is a nineteenth century folly laid down by some people who thought that the druids worshiped at stone circles.

The Armada beacon is likely to be a genuine Armada beacon site, as Alderley then was a clear vantage point. It was sited though on a now disappeared Bronze Age burial mound, which confirms my idea that we have remnants of a sacred landscape dating from the Bronze Age here.

That's a very interesting point and I think you are right about the myth/ legend undergoing oral traditional revision over time.

The legend as it stands is a medieval tale but you are right that based on ancient traditions it probably is.

This discussion has stirred up a thought. Consider that Alderley Edge is a high point with a legend of a wizard and that not far away is Lindow [derived from Llyn Dhu, Welsh for Black/Dark Lake, where human sacrifice was known to have been offered in the first century, we may have in the area the remnant of a small sacred landscape. Such landscapes were common in Britain, the largest being around Stonehenge, but there are other, less obvious sites. The book Rising Ground, which I reviewed on Wizzley, identifies one such landscape in Cornwall.

The Wizard is male, as is the sleeping king, but linked to dark lakes is the lady, the goddess of the Earth. The Lord and the Lady are key figures in ancient paganism. We see a remnant of them in Glen Lyon in Scotland, where there is still preserved a shrine to the Old Man and the Old Woman [an potach agus an cailleach]; Scottish fishermen used to stop at the isle of Gigha to render homage to the old man and the old woman. Traces of ancient paganism still linger in the British landscape and its folklore. That's why I think the legend rooted in the ancient past, though it has certainly gone evolution over time.

A lovely day out in beautiful, historic Cheshire sparked my interest because ... 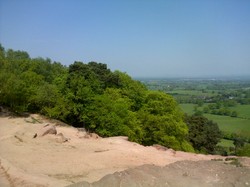 Cheshire's world famous radio telescope Jodrell Bank was the location of my Cheshire Day out today. Here's an account of it as a location and a little about its past.
82%  18   6 Veronica
Travel & Places 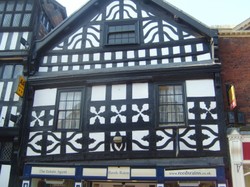 A lovely day out in beautiful, historic Cheshire sparked my interest because this quaint town has two major events in its history. Fire and War
Loading ...
Error!