The Ghostlore of Windsor Castle

A castle over nine hundred and fifty years old has had time to build up some ghostlore.

Windsor Castle is the oldest inhabited castle in the world. Constructed in 1070 by the Normans it has been developed over the centuries and is now the monarch's weekend residence, though she has dwelt there full time during the covid pandemic, away from the draughty, ill-designed Buckingham Palace. The castle is linked to Windsor Great Park, where Mediaeval monarchs hunted deer for castle feasts, Over the years it is said that twenty five ghosts have been seen, including some regal spectres. Not all can be identified and named. But there is one legendary figure who, tradition says. haunts the park, but not the castle.

Castle are constructed by people who are having difficulties with the neighbours, and when the neighbours would dearly love to kill you the construction of a defensive edifice becomes urgent. Thus in1070 William the Conqueror constructed Windsor Castle as a defence against rebellious Saxons and he designated a great park to go with it. William brought architects from Europe, who were skilled at castle building, but he used forced labour, Saxons pressed to work for their oppressors. Thus a castle is always an act of violence, a place, where, whatever its subsequent history, people were sad and in pain.  Do emotional traces linger in places? Some think so. Or do souls hang on to the places where they dwelt in embodied times?

The castle is a popular place with tourists, and the local people now are generally proud of their local attraction, and while there is a small republican element, like me and my fellow Wizzley writer Veronica, most favour the monarchy. The Great Park is open to the public for recreation, with occasional restrictions for national security. It is a   safe place to be, as the police and army are present. Military presence continues during the night, and it can be a lonely and disorientating place to be on duty, especially for rooky soldiers, unused to the way in which night magnifies the significance of noises.

An incident occurred a few years ago, it was not supernatural, but can be attributed to hallucination. An eighteen year old guardsman, one of the elite regiments that are dedicated to defending the monarch, was on night duty. The hours were long, the isolation oppressive, especially for a young lad, and the sounds of the night, animal noises made by foxes and badgers, and the whispering of the winds in the boughs of the great oaks were eerie. Moonlight cast patterns of light and shade, when the frightened teenager said that he saw a statue move. The hallucination can be attributed to the interplay of moonlight and shadow on the mind of a frightened person, and he passed out in terror. When he did not radio his scheduled report a patrol was sent out and found the lad unconscious. He was taken to sick bay and was not punished. The experienced officers know well how the ambience of night in the Great Park plays on the mind.[The army did not release the soldier's name.]

Yet in the nineteenth century a young guardsmen committed suicide when on duty, an act born of depression. A few weeks later Sergeant Leake was on duty at the place where the suicide occurred and was expecting to be relieved when a figure approached. To his horror he found himself face to face with the suicide, who disappeared as the proper replacement came.

Another military incident happened in 1906 when a guard saw a group of men approaching. They ignored his first two challenges, and after the third he fired, only for the bullet to have no effect, causing one of the figures to flinch, but still approach. At that point the soldier charged with his bayonet, only for the figures to disappear. After a search of the grounds proved fruitless, the soldier was punished by being confined to barracks for three nights, which hardly seems fair.

Several deceased monarchs are said to drift through the castles ancient halls, though they do not include any of the murderous bunch who succeeded William the conqueror. There are a couple of murderous Tudors. Surprisingly "Bloody" Mary, a misnamed monarch, is not among them. Henry the Eighth has not often been  seen, but the sounds of the king, lame in his later years, are   said to be audible in Windsor's corridors. Occasionally, Henry is seen in the Deanery corridor, hobbling along.  Henry is buried in St George's Chapel in the castle. Readers who have watched royal weddings on television may have seen the place. Henry does not seem to have strayed far from his burial place, well I doubt that he is in heaven! Henry's paramour, Anne Boleyn, is said to be occasionally visible  looking tearfully through windows, but she is reputed to haunt several places in England.

Elizabeth the First is said to haunt the library, and there are rumours that the present monarch has seen her. In 1897 Lieutenant Carr Glynn of the Coldstream Guards  saw a black-clad woman entering the library and noted her similarity of features to the portrait of the late monarch. Having followed her into the library he asked the librarian who she was, only to be told that no-one had entered prior to him and that there was no other door. The librarian then informed Carr that he had seen the ghost of the Tudor monarch, who seems to haunt the library. She is sometimes preceded by the sound of footsteps. A woman dressed in black is said to be seen peering out through the library windows.

King Charles the First is also said to have been seen, but no stories recount what must have been a fleeting visitation.

King George the Third is not a regular visitor, but there were some manifestations after the death of the monarch who suffered sporadic bouts of insanity and had to be incarcerated while his son ruled as regent. Shortly after the death of the monarch, who reigned for sixty years, an officer leading a troop of soldiers near the room below the library saw the king looking out of the window. He instinctively said "Eyes Right" and so all saw the late king, who waved to them. This was clearly an interactive ghost, unlike those that seem like unresponsive video tapes.

The other  twenty or so spirits cannot be identified. Monarchs are more  recognisable than commoners, but often have blood on their hands. George the Third was not a violent monarch, as kings go, but he did support slavery and opposed Catholic emancipation, which only happened a few years after his death.

Last, but not least, is Herne the Hunter, who is said to lurk in the Great Park and appear when a monarch is about to die and when England  is in peril. Herne is unmistakeable, a figure  who sports stag's horns, but no one has ever  seen him. He is a legendary figure first mentioned in the play,  A Winter's Tale, by Shakespeare, who seems to have thought him a fictional character.  A version of the Herne story has him roaming the park as a great stag, and it is suggested that mothers used to frighten naughty children with the threat that Herne will get them.

Various explanations for the Herne story are given. Some think him a historical figure turned into a legend, and possible dates are advanced, going back to the time of Richard the Second. The legend is that Herne was a royal huntsman who fell from favour as a result of a malicious campaign of lies by fellow huntsmen jealous of his position. Shamed and broken, Herne hanged himself and as  a suicide is doomed to wander the Earth.

Other suggestions are that Herne is a pagan woodland deity, and many pagans, Wiccans especially, follow the pagan anthropologist Margaret Mead, in thinking him a version of the Celtic horned God, Cernunnos, who is represented on the wonderful Gundestrup cauldron, a silver vessel found in Germany. But many scholars object that Cernunnos was not known to have been worshipped in Britain, so Mead's identification of him as the god of the witches is dubious to say the least. However, Herne is sometimes linked to the Wild Hunt, the mythical riding of pagan spirits across the landscape at night. The Wild Hunt is found in many European mythological pantheons, and  I think that this idea has some traction. The Saxon god Woden [Odin] was sometimes thought to lead the Wild Hunt, so the legend of Herne may well have blended in some elements of Woden, who also was said to have acquired Wisdom by hanging on a tree for nine days, which fits in well with Herne's hanging himself. Paganism has a plethora of local deities and nature spirits, so Herne could well be one of these, possibly conflated with one or more historical figures.

Without a doubt, Windsor Castle and Great Park are places with a long and significant history, and such places often have an atmosphere. Some people are sensitive to it.

I am an Amazon associate and earn money from qualifying purchases on  this page.

I take a phenomenological approach,which is to suspend judgment or explanation while the phenomenon is studied.This means that I collect accounts of ghosts,but refrain from proposing anything other than a tentative explanation.I eschew ontological speculation. The phenomenon of ghosts is so widespread in space and time that it cannot be written off or attributed to any single explanation.

Frank
Ty for this. As you know, I do not believe in ghosts; there is always a rational explanation. I do believe in Stone Tape ( which I had an example of only ten days ago in Grimsby Minster in fact). I am sensitive to atmospheres but would never call these " ghosts".

The supposed ghosts which are included frequently in pieces of fiction, invariably are taken as fact by later generations. In fact, when I did a Literacy workshop for children at a local manor to focus on writing fictitious pieces, the examples I used for stimuli, immediately went into local legend and were actually reported back to me months later as old local ghost stories. ...Despite the fact that I had invented them as writing stimuli for children only months before. Shame on me!

A Stone Tape article would be good! 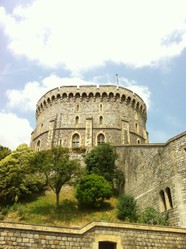 To the Island of Tides28 days ago