The Ghosts of Bradford

Do you love a good ghost story? How about a few stories? That's what Bradford, West Yorkshire has to offer.

Bradford, West Yorkshire is my hometown and is full of ghosts. There are apparently four living in Bolling Hall, which is now a museum and located just two streets away from my parent’s home. I used to visit it every summer with my aunt and grandmother, but only ever heard of two ghosts. It was only after it was on the ghost hunting TV show Most Haunted that I heard about the other two.

There are other ghosts dotted around the city. Some live in City Hall, while others haunt the local drinking establishments. Here is a story of the more popular ghosts of Bradford.

The Beautiful Bolling Hall: Home to a Number of Ghosts

Products on Zazzle for the Bolling Hall Ghost

Bring a piece of Bradford to you.

The most famous ghost dates back to 1643, when the first sighting was spotted. The Earl of Newcastle was staying at Bolling Hall overnight just before an attack on the people. He was the head of the Royalist army at the time and had ordered his men to kill everyone in the town (as it was back then).

During the night, the earl felt the bed covers being pulled away from him and he woke to a woman at the bottom of the bed. This ghost was wringing her hands, pleading him to “pity poor Bradford.” She wanted to save her people and she did. The next morning, his orders were changed to only kill those who put up armed resistance. In the end, there is a record of just 10 being killed in the town.

She now haunts the “Blue Room,” which was under construction for a number of years when I was younger. The whole of Bolling Hall is a mixture of different time periods, after the building feel into disrepair a number of times. The Blue Room needed updating to make it safe for tourists. I still remember looking through the window, waiting impatiently for it to finally be finished so I could hear all the stories of the woman.

Other ghosts in Bolling Hall include a woman who fell (was maybe pushed) over the balcony and a group of Parliamentarian officers on the ground. Many in the past have reported hearing women talking and have heard a baby crying. Unfortunately, I’ve never heard or witnessed any of them, but there is certainly a creepy feeling of people watching you when you’re in a room alone.

Play along with a young Victorian girl in the hometown of the Bronte sisters.

Haworth is well-known as the home of the Bronte sisters. It’s a beautiful village and one certainly worth a drive out to. I constantly tell my husband we should visit but have never gotten around to taking him yet.

While there are the odd locations in the area with ghost stories, one of those allegedly being the haunting ground of the Bronte sisters’ brother, Branwell, there is one ghost story in particular that many visitors hear about. That is of the Victorian girl who simply likes to play by running up and down the stairs.

She lives in the Parkside Social Club and many have heard the sounds her footsteps make. Visitors have even gone investigating up the two sets of stairs to try and catch the culprit making the noise, but there was never anything there.

The pool room has become the place for guests to stay away from after reports of sightings of the girl there. However, the daughter of a volunteer, who is just 10, happily goes into the room to play with the “ghost girl.”

The Hare and Hounds Pub

One pub caught fire for seemingly no reasons. Firefighters still struggle to explain it.

Hare and Hounds in Oxenhope is a place where plate s fall off the wall with no contact. Michael Roper, landlord of the pub, believes that the ghost is that of a female pig farmer who died in a horse and cart accident. She died in the pub and patrons have noted that there is a black-dressed woman in the establishment.

It was also the site of a fire that firefighters could not explain. A porcelain figure somehow caught fire with nothing around it. Strange voices and slamming doors have been heard in the establishment.

Forget Bloody Mary; just outside of Shipley you may meet Blue Mary

Wrose is just on the outskirts of Shipley and offers a beautiful look over Aire Valley. However it was an area that always gave me the creeps when I was younger. We would pass it on the way to my dance lessons and I always got the sense that there was something watching me every time I drove through the area.

It turns out that Bolton Old Hall is haunted by a ghost called Blue Mary. Anyone who enters the house feels her presence but very little is known about her. In fact, most of what is known is based on legends dating back to the 19th century. She was blamed for the cows not producing enough milk at one point but nobody knows who she could be or where she came from.

Two locations in the heart of the city have their own ghosts, and one is a famous lord!

These two locations are in the heart of the city. The Midland Hotel is commonly used for functions and is beautiful on the inside (the outside really needs some work). It is said to be haunted by the ghost of Sir Henry Irving, who suffered a stroke on stage while performing Becket. He uttered his character’s dying words after dying in the hotel’s lobby. I’ve only been in the hotel twice and I’ve never felt the presence as strongly as I have in other establishments around the city.

City Hall is haunted by a ghost called Chains Charlie, who is thought to be a tortured prisoner. He haunts those who come to City Hall, and people have reported seeing a headless man with his head being held to one side.

Many cities and towns have their legends and ghost stories. Bradford seems to have its fair share of them. Bolling Hall is certainly the most haunted place in the city, with very few people being able to name all the stories and legends that surround the now-museum but there are plenty of others if you go digging enough.

I am definitely going there, thank you.

I highly recommend the areas, personally. I am biased though since I grew up having all these ghost stories on my doorstep and they are some of my favourite places from my childhood.

Oh I do love a ghost story! I may have to take a visit...

The Paranormal Society of New Orleans set out to communicate with gay fire vi...

A poltergeist seemed intent upon burning down the MacDonald Farm in Caledonia... 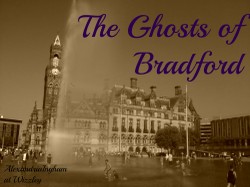 The Paranormal Society of New Orleans set out to communicate with gay fire victims murdered in 1973, but found an older and darker spirit rooted in the city's past.
100%  11   6 JoHarrington
Ghosts and Ghost Hunting 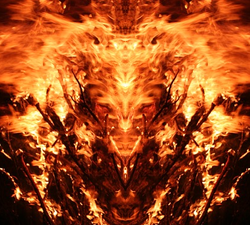