The greatest comebacks in football history

I will be analysing the greatest comebacks ever witnessed in world football, including what makes a comeback so monumental, and my own favourite comebacks.

After tonight's incredible champions league match where the young German side Borussia Dortmund came back from 2-1 down in the 90th minute to beat Spanish team Malaga 3-2, I will be assessing famous footballing comebacks, and what makes them live so long in the memory of football fans.

An unforgettable comeback in a game of football is more than just a result, it is a feeling that only a true football fan can describe. Over the years we have seen so many famous games in which a team has come back to win the game in such short succession, pulling back a large deficit, that it is hard to categorise them into some sort of order.
I will outline the comebacks that are the first that come into my mind, and I will discuss why they are so memorable, and why they are the best we have ever seen.

So why is this game the most compelling comeback of all time? I will tell you why. The game was always going to be extremely close as the two best teams in Europe battled it out to get their hands on a piece of silverware. As expected, the game stood at 1-0 to Bayern Munich, and remained at this score as the game went into injury time. As the fourth official indicated their would be three minutes of injury time, a corner from Beckham landed on the head of striker Dwight Yorke, who knocked it across the goal and the ball landed to Ryan Giggs, he shot and the ball landed to Sherringham who finally put the ball in the back of the net. 1-1. Within thirty seconds of the restart, United won another corner.

Almost a repeat of the first corner, Beckham whipped a curling cross into the penalty area, the ball met the head of goalscorer Teddy Sherringham who headed it down, only to land at the feet of Norwegian, Ole Gunnar Solskjaer who tapped the ball into the net to give united the goal that won them the Champions League troophy. Within 2 minutes, United had gone from 1-0 down, to 2-1 up, phenomenal.

As a club, Manchester United are known as a resilient team, always giving 110%, fighting till the end, which is a true reflection on this particular game. To top this off, the 1998-99 season was the year that the reds had already won the premier league and the FA Cup, meaning that UCL succession would complete a famous treble, which they did. Finally  the sheer speed of how the reds managed to score in quick succession, in the biggest game of the footballing season, makes this comeback the best we have ever seen.

Another obvious, yet special moment in the history of football. Known as the Istanbul final, this thrilling game was held at at the Atatürk Stadium in Istanbul, Turkey on 25 May 2005. The game finished 3-3 by the end of extra time, and Liverpool famously won the game on penalties, 3-2, winning their memorable 5th European cup.Arguably the best comeback ever, I will go through the reasons why this match was such a fantastic night for the sport.

AC Milan absolutely dominated the first half, going in at half time with a mesmorising score of 3-0. Already, almost everybody had written the team from Merseyside off, and conceded the trophy to the Italian giants. However, Liverpool had other ideas. Coming out in the second half, Liverpool looked like a different team. The first goal came through Steven Gerrard after he headed in a cross from full-back John Arne Riise. Moments after, they scored again, this time Vladimír Šmicer hitting the goal after beating keeper Dida in the AC Milan net.

Liverpool were now trailing by one goal. Three minutes after Liverpool's second, they were awarded a penalty. Midfielder Xabi Alonso stepped up, looking to score his second of the game, but missed. Fortunately, he managed to get to the rebound and smashed the ball home. 3-3. Liverpool were level. The game went into extra time and the game had gone into a penalty shootout. Liverpool had already completed an astonishing achievement, yet they still did not have two hands on the champions league trophy. The penalty shootout finished 3-2, with Jersey Dudek saving the final penalty that was struck by Shevchenko.

A truly monumental comeback, showing fight, passion, and true determination, a reflection of the attitude that Liverpool have always shown as a club. The reason why this comeback lives close in the memory of all football fans is because to pull back a 3 goal deficit in 45 minutes of football is an astonishing achievement alone, but to then go on to win on penalties, winning the 5th European trophy for the club, is something a script writer could not even make up.

3) Manchester City vs. QPR, 2012 - The final game of the premier league season

Now here is why it ranks as one of the biggest footballing moments of history. During the final day of the season, Manchester United took the lead first, meaning that at that moment of time, they were the Premier League champions as it stood. This changed as Pablo Zabaleta got the first goal for the 'noisy neighbours', putting City back on top of the table. This changed rapidly as QPR ended up scoring two girls against Manchester City, meaning the table leader changed once again, putting Manchester United as champions. The scores stayed the same until we hit the 91st minute. Celebrations were going on at the Stadium of Light, where Manchester United thought they had won the title after beating Sunderland 1-0.

However, the United fans began to get nervous as Edin Dzeko scored an equaliser for City, meaning they needed just one goal to win the title. The goal came in the 92nd minute. The ball played into Mario Balotelli, passed onto leading goalscorer Sergio Aguero, who skipped past one player and smashed the ball into the back of the net, creating an incredible noise around the Eithad Stadium, followed by a pitch invasion from the fans come the final whistle. Incredible scenes.

Now, why is this such an incredible comeback? Well taking into consideration what this game meant to the City fans and players. Over 40 years without a title, being dominated by rivals Manchester United for years, City had finally beaten them to the title, in one of the fiercest rivalries in the world. Also, like the 1999 UCL final, the goals came in rapid succession, making the game even more special. To win the premier league title, in the final minute of a match, to your rivals, will never be seen again in the history of the premier league, for a long, long time. Also, the famous line of, 'Agueroooooooooo', will live long in the memory for all football fans. Expect those United fans of course!

My favourite comeback has to be Manchester United's 1999 champions league win. It defines exactly what the club is about, showing true passion and determination to win the game in the dying minutes of the game. To score two goals in such a big game, in such a small amount of time is an outstanding achievement alone, but to do it under the pressure of a treble season, for me is the greatest moment in football history.

Yes i did, wouldn't say it was in the greatest, but incredible comeback! And thank you so much, much appreciated! :) More sport posts coming from me in time!

Great! We needed some good old sport posts here on Wizzley :)
I remember well the first 2 games you mentioned but I would also like to add Borussia Dortmund as well... i guess you saw what they did the other day!!
Thanks for sharing this Owen...

Football is a fantastic sport. Thank you so much, much appreciated!

I love football, this is a great tribute to the sport. I learned some interesting tid bits, by bf will be impressed when I talk football with him, he's an even bigger football fan and enthusiast. :)K 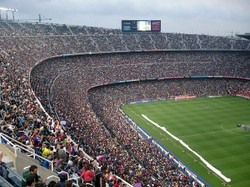