Arthur Wharton was the world's first black professional footballer. He was also a brilliant athlete, cricketer and cyclist. Yet few today have heard of him. That's about to change!

Shaun Campbell from the Arthur Wharton Foundation has launched a campaign to bring Arthur’s achievements to the notice of sports fans and the general public everywhere. He is trying to raise money for a seventeen foot statue of Arthur to be erected in his honour Already smaller bronze versions of the statue are on display in such prestigious organisations as Wembley Statium, FIFA (International Federation of Association Football) in Zurich and UEFA (Union of European Football Associations).

So - who was Arthur Wharton, and what is his story? His life involved not just outstanding achievements but racial bigotry and scandal.

According to the Arthur Wharton Foundation (AWF) website, Arthur was born on 28th October 1865 in Jamestown on the Gold Coast which is now known as Accra, Ghana, West Africa.

He came from a very respectable family.  His father was Henry Wharton, a Methodist Minister who was half-Grenadian and half-Scottish whilst his mother, Annie Florence Egyriba,  was a Ghanaian princess.

Arthur had every intention of following in his father’s footsteps.  He came to England  when he was just nineteen  in 1882, so that he could study to be a Methodist preacher/missionary at Cleveland College, Durham.

But like so many sporting heroes, student life meant his natural athletic abilities could blossom.  Studying was destined to be a thing of the past for Arthur because his sporting prowess soon became apparent.

Arthur ‘s football skills came to the notice of Darlington Football Club. As a result he was selected to play as goalkeeper in a professional capacity.  This was Arthur’s first triumph - he was now the world's first black professional football player.

However, Arthur was blessed with astonishing skills in more than one area of sporting life.  Not only were his skills as a football player outstanding:

Back to football...  Selected to play for Newcastle and District Team  in 1885/86  Arthur soon became a favourite with the North-East fans. They loved him.  He was a real showman, entertaining  the crowds by crouching in the corner of the goal area  and only saving the ball at the last minute, or doing pull-ups on the cross-bars and catching the ball between his knees.

In 1886  Arthur moved to Preston North End  where he played in the FA Cup semi-finals of 1887. Arthur went on to play for  Rotherham Town, Sheffield United, Stalybridge Rovers and Ashton Northend. His career came to an end  at Stockport County in the  Second Division in 1901-02.

The northern fans considered Arthur brilliant enough to play for England, but  he was never chosen.  Given the deep undercurrents of racism in British society at the time and the imperialist legacy that was prevalent and still building, it would arguably  have been seen as impossible for a black man to represent England.

A BBC television feature  about Arthur on the magazine programme  Inside Out, January 2013, showed contemporary newspaper  headlines  describing  Arthur as a ‘darkie’ and one interviewee, Lisa Sultanti of Football Unites Racism Divides,  gives other examples where Arthur is described as having ‘monkey-type’ features.

It would take another one hundred years before a black player would be chosen to play for England - Viv Anderson. Anderson too has had his fair share of racist taunts.  At the time of his selection  Viv was not aware of Arthur Wharton,  but now his profile has risen and all black players know of him.

Books on Racism in Football

Why Haven't We Heard of Arthur Wharton?

According to the AWF Arthur was airbrushed out of history because he was black.   There was another reason too.  He had a scandalous family secret.

Arthur was a victim of society’s moral values and his adultery as well as the colour of his skin contributed to his downfall.  The BBC's Inside Out feature also highlighted Sheila Leeson from Rotherham in Yorkshire.  Sheila  is an elderly lady who never realised that Arthur Wharton was the grandfather she never knew.  She  eventually identified him through a box of old family photographs that had once belonged to her mother .

The photographs show pictures of Arthur and his sisters, as well as his parents and Sheila always felt they were distant relatives.   She soon discovered through research that  Arthur had been  married to the sister of Sheila’s grandmother - but Arthur had committed adultery with Sheila’s  grandmother and she had borne him 3 children, one of whom was Sheila’s mother.   It soon became clear to Sheila why her mother had refused to answer the question:  “Have I got a grandfather?”

Including footage of his Grandaughter

Arthur’s  prestigious footballing career began to take a slide from this point onwards.   The website,  100 Great Black Britons, suggest that a combination of hard drinking,  together with a natural decline of his skills  due to age,  were factors.   He retired from football in 1902.

His downward spiral and drinking could well have been triggered by guilt and remorse, fuelled by society's hypocritical attitudes to what were seen as moral failings. He had also been brought up in a religious household in a colonial country.  Arthur's life was complex on many levels.

Unlike today there was no physical or emotional support for players suffering trauma. Today even physical violence on the pitch between players hardly receives punishment.

Because of his adultery Arthur lost his family and his status as a footballing hero, ending  up as a miner at Edlington Colliery and  living in poverty.   He had gone from being a great star to complete obscurity.

A victim of the same moral prejudices, Sheila’s grandmother was also banished by her family.

Arthur Wharton died in 1930, aged 65, and was buried in an unmarked grave in Edlington.  However, thanks to the Sheffield United based project, Football  Unites Racism Divides, Arthur’s grave has been fully restored.

In the true spirit of unity which football can inspire, Arthur Wharton’s grand-daughter, Sheila, went to Ghana and discovered Arthur’s huge family - her family.  She visited her great grandfather’s  church and Arthur’s school and the students were thrilled to discover that such a great athlete as Arthur was an ‘old boy’.

Shaun Campbell from the Arthur Wharton Foundation also visited Ghana and has raised Arthur’s profile with his appearances on local television and his meetings with diplomats and officials. He and his organisation also go into British schools and colleges to give talks about Arthur.

Efforts to erect a statue to Arthur Wharton have a wider ambition. To quote from their website, they want to also encourage:

"• The promotion of cultural understanding and enhanced relations between different racial groups through educational and awareness- raising programmes;
• The development of a range of events and activities, including tournaments, to foster understanding between people from diverse backgrounds;
• The ongoing raising of funds to help to ensure that young people from all backgrounds and cultures have access to the equipment and facilities which will enable them to develop their own sporting skills and talents."

In addition, the anti-racist organisation Kick It Out has created an exhibition for use by schools, youth clubs, and similar organisations. Called Pioneers, Past Masters and Future Challenges, it features Arthur Wharton amongst its celebration of black and Asian football players.

Arthur Wharton was one of Britain’s greatest athletes. In 2003 he was inducted into The National Football Museum's Hall of Fame.

As Europe takes up the gauntlet to fight racism, there has never been a better time to remember this remarkable man.

cmoneyspinner - I'm so pleased you found the article interesting - and thanks very much for sharing it on Pinterest! :)

Rising above racist taunts or any kind of taunts for that matter? If you trying put certain folks down, taunting them usually just motivates them to achieve. It's so silly! Why people gotta be haters? Dumb stuff!! Interesting article. I love biographies. Sharing this via Pinteres.

Hi John - Tull was, I believe, the first black professional footballer to play in Latin America after he signed for Tottenham in 1909. Wharton was, as you say, professional before him. Tull had a distinguished life, and it would make a great article. They were both very brave sportsmen to have braved the racial abuse they had to contend with on the pitch. Really appreciate your comments - thanks.

I think you're right but I was reading that Walter Tull was the first black professional footballer. His story came a little later. He played for Spurs and became an army officer in WW1 where he died. Either way, kick it out is the best idea. In the UK, we more or less have but I share your sentiments about the East European fans.

I agree - I too was reminded of Eastern Europe. There's a long way to go still I think...and also it's still hard for gay players. Kick it Out are campaigning for equal rights for both black and gay players. I'm glad you found it interesting Nick. Thanks for your post.

Very interesting. Is it really only just over thirty years ago that Viv Anderson became the first black player to represent England? It is great that this has become normal now but what a terrible shame that they still suffer abuse, particularly when they play in countries in eastern Europe.

A rare portrait of a freed black slave, painted by William Hoare in 1733, is...

The Tweed Run is an annual London bike ride where people dressed in retro clo... 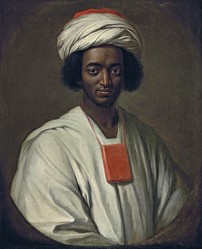 A rare portrait of a freed black slave, painted by William Hoare in 1733, is visiting galleries in South Shields and Leicester before returning to the National Gallery in London
43%  3   5 KathleenDuffy
Sporting Events 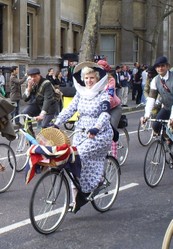 The Tweed Run is an annual London bike ride where people dressed in retro clothing ride their classic cycles through central London. It might be batty but it’s going global!
Loading ...
Error!