The Hunger Games books and movie.

The Hunger Games by Suzanne Collins

Sometime in the future, on land that was once the United States of America, stands Panem. A brutal country divided into 12 districts and their Capitol. The districts waged war on the Capitol but were defeated. As part of their surrender, each district agreed to send 2 teenagers, one boy and one girl, to fight to the death in an annual televised event called "The Hunger Games" with all citizens required to watch.

In the first book, Katniss Everdeen is a 16 year old girl living with her mother and younger sister Prim in the poorest district of Panem. Prim was selected as their district's female representative, but Katniss volunteers to take her place. Peeta Mellark, son of the town baker, is the male tribute. They'll have to fight against bigger, stronger representatives who have been training for this their whole lives. The only rule in The Hunger Games is to stay alive.

The second book in the series is Catching Fire. The final book of the trilogy is Mockingjay. Not wanting to ruin the ending of The Hunger Games I can't really give a synopsis of the remaining stories. All I will say is that The Capitol is angry and wants revenge. The series goes from gladiator game, to revolution, to war, and to the outcome. 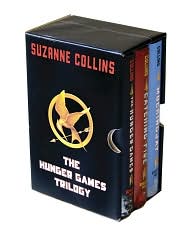 Which is your favorite book of the series?

Suzanne Collins started writing for children's tv shows in 1991. A few of my favorites were Clarissa Explains it All and Oswald. She later became the Head Writer for Scholastic's Clifford’s Puppy Days. Her first well known independant work was on the five part fantasy series, The Underland Chronicles, for readers age 9 and up. After that followed The Hunger Games.

Collins was named one of Time magazine's most influential people of 2010.

In preparation for the 74th Hunger Games, your Capitol would like to remind you to keep your District Identification Pass up to date. Your compliance with all Capitol regulations is appreciated.

Visit The Capitol - The Official Government of Panem to recieve your District Identification Pass.

Make sure to check out Hunger Games Posters & Gifts.

Are you a fan of The Hunger Games?

I didn't read The Hunger Games book and I haven't watched the movies yet. But I will. I promice. I heard a lot about the books and movie.

I am halfway through The Hunger Games now. It's a great book.

But we can talk about some of the themes that run through the Hunger Games. For example it spotlights the plight of poorer children in war. Each district draws the name of it's Hunger Games contestants, but it's not a fair drawing. Rich children probably only have their name entered once. But poorer children can get more food rations for their starving families, if they enter their names several times. So the likelihood of a rich child dying is much less than a poor one.

This is a fantastic series that parent should read with their children. Partly because it's so dark that children may have trouble coping with it.

Looking for similar good books to The Hunger Games? If you've read this trilogy (or even watched the first movie), you're probably hooked on this genre, just like me.
24%  1   3 SteveRogerson
Young Adult Books