Imagine a world where one in five teenagers has the ability to read minds. These are the perceivers introduced by Jane Killick in the first novel of the series. In the second novel, the story has moved on with the perceivers no longer the outcasts of society but helping the government in criminal trials and fighting terrorism.

Mind Control is the second book in Jane Killick’s Perceivers series about teenagers who have developed mind-reading abilities. We learned about these perceivers in the first book – Mind Secrets – and we also learned, though few people in the world of the book knew, that there were older perceivers.

The second book of the series kicks off with Michael using his powers to help the police interrogate a suspected terrorist. Michael has lived in a camp for the two years since the first novel ended along with other teenage perceivers. Those in the camp were the ones who had agreed to work for the government rather than take the so-called “cure”.

However, Michael’s perceiving detects something different, or rather something missing, with this terrorist. This leads to him going under cover to infiltrate a gang of teenagers that appear to be more than they seem.

Is Perceivers: Mind Control Any Good?

This fast-moving novel takes the reader well away from the territory of the first book into the world of international espionage. This was a bold move but one that works as it instils freshness into the story of these teenage outcasts.

Aimed at young adults, it thus makes the teenagers – Michael in particular – the focus of events. There is action, there is humour and there is a potential love interest for Michael in fellow perceiver Pauline. It will be interesting to see how that develops in the later novels in the series. We also see Michael’s loyalties and emotions being stretched as his father, who created the perceivers, is put on trial.

My one gripe is that we never found out what happened to the teenage gang that Michael infiltrated or the real back story of how they ended up doing what they did.

That said, those who enjoyed the first in the series should enjoy their return to this world and learn the consequences of the events in book one.

Jane Killick has already published two more books in the series and I am looking forward to seeing where she takes Michael and the other perceivers next.

Jane Killick is best known for her season-by-season guides to Babylon 5 and as a journalist on various science-fiction magazines. She also wrote The Making of Judge Dredd and Stasis Leaked, a guide to the first season of Red Dwarf. She is a broadcaster and can be heard reading the news on BBC Three Counties Radio. Other novels include If Wishes Were Husbands and Fairy Nuff.

SteveRogerson, Thank you for product lines, pretty pictures and practical information.
Thank you for mentioning this series. I know the author from her Terraforming Mars. Would you happen to know which of her writings has done the best, in terms of awards, profits and respect?

A review of the first book in Jane Killick's Perceivers series 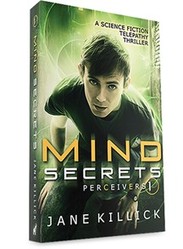 The story of a woman who accidentally becomes a fairy and would rather she wasn't.
Loading ...
Error!