The story of a woman who accidentally becomes a fairy and would rather she wasn't.

Part comedy, part fantasy and with a little bit of romance thrown in, Jane Killick's latest novel Fairy Nuff is a joy to read as it puts itself into the mind of Julie Nuffield (or Nuff to her friends, hence the title), who has been turned into a fairy and has the power to make wishes come true. She is not happy.

When Julie Nuffield bought a fairy costume for a fancy dress party, she thought it was a good idea. But when she couldn’t take it off, even to go to the loo, the idea lost some of its shine. Then her wishes started coming true. That is the basis of Fairy Nuff, the latest novel from Jane Killick.

Wishes can be a curse as well as a blessing, as Julie (known to her friends as Nuff) quickly discovers. She thus embarks on a quest to find the previous owner of the costume and see if she can remove its magical hold on her. If that wasn’t hard enough, her ex, Martin, has arrived back on the scene and she’d quite like to have sex with him.

Is Fairy Nuff any good?

This has the novelty of having a feelgood effect while most of the time the lead character is feeling bad. Full of humour, and told in the first person through Julie’s eyes, the book paints a lovely insight into her thinking and dilemmas. You realise quickly that she is not exactly happy with this unexpected gift and her mood travels rapidly downhill every time she uses a wish, even when she tries to do good.

As I neared the end, I realised that if I finished it in this sitting I would miss the opening minutes of the football match that was about to start on television. Thankfully, there were no early goals.

Finally, the publisher describes this as “romantic comedy”, which it is to a certain degree, but it is also very clearly a fantasy novel and should thus not be ignored by SF&F fans. Also, while it is certainly a comedy, the romance element is definitely a sub-plot.

Jane Killick is well known for her season-by-season guides to Babylon 5 and as a journalist on various science-fiction magazines. She wrote The Making of Judge Dredd and Stasis Leaked, a guide to the first season of Red Dwarf. She is a broadcaster and can be heard reading the news on BBC Three Counties Radio. Other novels include Perceivers and If Wishes Were Husbands. She also ate David McCallum’s salad.

SteveRogerson, Thank you for practical information, pretty pictures and product lines.
It's interesting that the heroine would rather be with the human she loves and perhaps get few wishes realized than see what she wants happen. Will there be any film spinoffs or any more books?

The debut novel from Madeleine Marsh combines mystery, horror and romance as ...

The Gift of Christmas: An Anthology
24%  1   3 SteveRogerson
Book Reviews 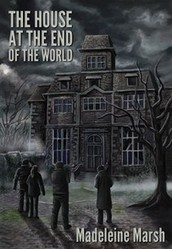 The debut novel from Madeleine Marsh combines mystery, horror and romance as the story of a strange house is unravelled.
30%  1   4 SteveRogerson
Young Adult Books