The Legend of The Croglin Grange Vampire

England has its own vampire story not connected with Count Dracula

The tale of the Croglin Grange Vampire chilled late Victorian England, told by the writer Augustus Hare in My Solitary Life it tells of a vampire attack on young Amelia Cranswell and the eventual retribution wrought by her brothers. The site of the legend is identifiable, but like all such legendary tales there are sceptics, and the tale has been elaborated in the telling. So what really did happen at Croglin Grange [also known as Croglin Low Hall] or did anything happen at all?

Crogllin Low Hall is a real place in North West England, about which Augustus Hare told a frightening tale. In 1875, he claimed, the owner, a Mr Fisher, let the  hall to the Cranswells, a visiting trio of wealthy Australian siblings, two brothers and a sister, Amelia. For a while, until March 1876,  they enjoyed the social pleasures of Cumbrian society, until one dreadful night. Amelia had a room on the ground floor, and though she had locked the window she had left the shutters open, only for her to see a pair of eyes. She then heard the noise of the putty on the windows being unpicked and then saw what Hare calls a creature climbing in. At this point we recognise the fable maker's art, for by  calling it a creature he implies something out of the ordinary, maybe supernatural.

Amelia,initially paralysed by terror, began to scream when the assailant bit her neck, and the sound summoned two angry brothers, who smashed down her door with a poker. only to find that the attacker had fled. They could see his tall and spindly figure disappearing into the moonlit night. Having summoned the doctor, they were told that Amelia was only slightly harmed, and afterwards they left Croglin for a tour of Europe, but returned to Croglin Hall. But one brother always slept with a loaded pistol.

Then one night the creature attacked again, but this time the brothers were ready. One brother dashed  to Amelia's room in  response to her cries for help armed with a poker; the other went outside with the gun, only to see the spindly cloaked figure [note the similarity to Bram Stoker's Dracula,] disappearing at a run. He took aim and fired, to see the assailant stagger. Chasing the now wounded culprit he saw it enter a churchyard. At this point he began to fear the supernatural and backed off.

Next day he summoned a posse of local men to enter the graveyard. Cumbrian graveyards often have box tombs above ground level, covered by a stone slab [as the Earth can be too shallow to dig easily ] One tomb had a disturbed lid. Carefully the sturdy farmers lifted it to find a shrivelled body in the tomb with a bullet hole in his leg. Thinking that they had found a    creature of the devil they brought brushwood and cremated it there and then. The body, drained of blood, quickly burned to cinders.

In 1924  Charles Harper investigated and found that there was no Croglin Grange,though Croglin Low Hall existed, and the description of the hall given by Hare did not match reality. The Cranswells were not traceable. Furthermore, there was no church nearby. He concluded that the story was pure fiction. [A low is a small hill.]

However in 1936 Clive Ross investigated  and found  a woman who had known a descendant of the Fisher family,  who had owned the hall and had been  told the story by this descendant. She, however, said that she had heard the legend from her grandfather, who was born in 1860, but who had heard it from his grandparents. This indicates that the story is older than the 1870s when Hare set it. Furthermore, there had been a chapel in the grounds of Croglin Hall, but while it had been demolished, the foundation stones were still visible. Moreover, a study of the hall's deeds reveal  that it was once known as Croglin Grange. A grange was the name given to outlying sheep farms belonging to  Cistercian abbeys, so it was likely that in a post-reformation Protestant society Catholic place names might be unpopular and would be changed by some people. This name change took place in 1724.But despite legal changes of name old names can linger on in common usage.

The Cistercian monks would not have had a woman staying in their Granges, so if there is any truth in the tale the events happened between the time when the Cistercians were forced to hand over their property, which was in the 1530s, and the late seventeenth century.

It seems that Augustus Hare took an older tale originating in the  sixteen hundreds and retold it for his own time. The parallels with Dracula were his own augmentation of the tale, and this is normal, for tales can be elaborated by the tellers.

So did it happen? We cannot tell, but we don't need to postulate anything supernatural, graveyards and vampire legends not withstanding. It appears to me that we are dealing with a record of a sex attack on a young woman that was fortunately prevented. As for the shrivelled body in the tomb, there is nothing vampirish about this. A thigh wound is often fatal as it can sever a major artery. We can postulate that the wounded assailant stumbled into a graveyard and took refuge in a tomb, where he lay slowly bleeding to death. By the time that the body was found it had been drained of all of its blood, leaving a shrivelled corpse.

The tale will continue to be recounted, but we need not treat it as an account of a supernatural event. Strange events not conventionally explicable do happen, but this is not one of them.

Your comment back on Nov. 2, 2018, associates few vampire legends with England.

Does the same hold for Cornwall, Ireland, Scotland and Wales?

Vampires, in my view, don't exist. It is perverted humans who bite necks, which is why I think that this was a human attack. As for ghosts! They occur/exist, whatever word you choose to use, but when I meet one that can hit as hard as a heavyweight boxer I will get worried. There is no need to be afraid of them.

Although I am afraid of ghosts and vampires, I really enjoyed the story. I wonder why did the creature chose Amelia every time. Perhaps the Dead prefer some people from others, the delicate or fragile ones. The scientific deduction in the end sounded convincing, maybe people distort the facts and make it sound scary in order to make it captivating.

The tombs are more common in the North of England, particularly the North West areas of North Lancashire and Cumbria, just south of Scotland.. The tombs are made of stone slabs, generally of local sandstone. They were not the graves of the poor, who had to be content with a shallow grave in the the thin soil.

frankbeswick, Thank you for the product line and the scary tale. I avoid scary stories even though the fear was lessened in this case because of the presentation.
Are box tombs common elsewhere in the Isles? What material are they made of? It sounds like they could be quite challenged by churchyard equipment and severe weather.

Indeed all the more allure

Vampire legends are few and far between in England.

I confess to a fascination with vampires, werewolves and witches, the stories are riveting. I indulgent in such, the ancient beliefs, documentation and events surrounding these tails, legends and recollections never fall on death ears with me.

The earliest part of Croglin Hall us a tower dating from the fifteenth century, which would have been a defence against the border reivers, both Scots and English. The hall was constructed in the sixteenth century and developed in stages later on.

It is amazing how a story can change over time. You have dissected it well. 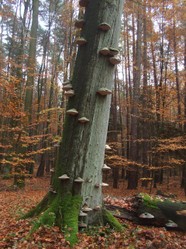 Sick of those vamps hanging around every time you get a paper cut? Here's how to get rid of them!
100%  30   11 JoHarrington
Vampires