The Love of Classic Mystery and Suspense Fiction

This article explores the history of classic mystery and suspense fiction, focusing heavily on the Victorian Era and the period between WWI and WWII.

Do you love reading classic mysteries and suspense from the Victorian Era through to the Golden Age of Mysteries between the World Wars and beyond? From Poe to Doyle to Christie to Stout to Chandler to Spillane, to name but a few writers, mystery authors have captured the imagination and minds of the public since the 1800s. This article explores and celebrates classic mystery and suspense and considers where the mystery is today.

Poe. Doyle. Collins. Christie. Sayers. Allingham. Carr. Stout. Spillane. Hammett. Chandler. Spillane. Reading these and other classic mystery and suspense authors have thrilled and enthralled readers for well over a century. Long after these writers have died, people continue to read them, write about them, talk about them, and make movies and TV programs about their books and their characters.

Little did Doyle realize that his own death would not stop new authors from creating new Holmes mysteries under the authorship of Dr. John Watson, the Great Detective's faithful biographer, and merely "edited" by men and women who never met Doyle. Some of them may not have even been born when Doyle died. There are mysteries focusing on The Woman of his life, Irene Adler, and others which portray a married Holmes.

Agatha Christie may have died in 1976, but she continues to be one of the best selling writers of all time. When she killed off her first detective in Curtain in 1974-a book meant to be published only after she died, but was published following the success of the film The Murder on The Orient Express-Hercule Poirot's obituary made the front cover. Even today, there are current writers who continue to write in the classic tradition.

What exactly is meant by "classic" mystery fiction?

The term classic is two-fold in its meaning when attributed to anything from books, movies, TV programs, actors, rock music, or cars. Classic can refer to the age of the item or its overall quality. In the first sense, a book can be classic because it was written over 100 years ago, no matter what the quality of the mystery. In the second sense, a book can be classic even when it is brand new because it is 4 or 5 star quality. Ideally, classic should be used for both terms simultaneously, since not everything old is well written.

When referring to classic mystery fiction, stress is emphasized on the age of the novels and short stories written, in particular when an author was first published. In this assessment, a very late novel in Agatha Christie's career such as Third Girl can still be considered classic, because Agatha Christie is a classic author: this despite the fact that Third Girl is not viewed as favourably as mysteries in her hey day such as Murder on the Orient Express or And Then There Were None. In the earliest decades of the genre, readers could quite often solve the case long before the detective-regardless of whether it was a Whodunit or a Howdunit-because writers thought they were being clever in making the criminal the least likely subject. All a reader had to do in a Whodunit was pick out the person who had never been suspected, and voila! the reader is not even half through the book and is smarter than the detective. With a Howdunit the so-called locked room mysteries later perfected by John Dickson Carr were not so locked out after all. Therefore, readers can look at a book such as Mystery of the 13th Floor by Thayer and wonder at why it is considered classic when it is easy to solve.

But these early mysteries were the starting ground for later, more complex mysteries in the careers of even the same authors who had been writing these early mysteries. Age simply *must* be considered essential when looking at assessing whether or not the term classic is appropriate for mystery and suspense fiction. The Golden Age of Mystery and Suspense is generally considered to be the period between the World Wars, even though the authors who began writing in that time period-as well as those who had started their career earlier that 1918-continued writing for decades to come. This is because everyone writing in that era -and there was a treasure trove of names-was writing at high quality book after book and/or short story after short story.

This is true of hard boiled fiction as well. Today, hardboiled fiction is one of the most widely read sub-genres of mystery and suspense. The private eye is everywhere, and several of them are female-created by Marsha Mason, Sara Paretsky, and Sue Grafton. But they all owe their start to early writers such as Raymond Chandler, Mickey Spillane, and Dashiel Hammett. These writers in turn were inspired by the dime store novels and comics written even earlier by names some of the general public have forgotten. But they are well known among people who write hardboiled fiction.

But for mystery and suspense books in particular, there is a third sense of the term classic: new books that are written in the style of or are set in the time of classic mystery fiction. Someone alive today can write books that read as if they are set in the Victorian time of Sherlock Holmes-often with Holmes or Irene Adler as the main detective, or in the style of the Murder Most Cozy that Christie, Dorothy L. Sayers, and Margery Allingham made their staple style of mystery and suspense. There will probably never be a time when a new Sherlock Holmes isn't published, as long as there continues to be an audience for them. Judging from the degree to which classic authors continue to sell their work after death, the audience isn't going away anytime in the future.

Alphabetical Table of Classic Detectives and Their Authors

Professional and Ameteur Detectives Who First Appeared before 1960

Current View of the City

Important Sites for the Classic Mystery and Suspense Fiction Lover

A Wealth of Information

http://www.fantasticfiction.co.uk/
Author bibliographies in great detail by alphabet and genre

Hi, Steve-Thanks. Yes. I though the table would be a good idea for people who want to read these authors and their characters, but don't know what the first book is in the series . This was they can start at the beginning. Too many times I read books in whatever order I could find them-and then I would find out certain information that such and such character has died or been arrested etc, in a later book-before I got to read the earlier book. That happened to me with Agatha Christie books.

Excellent article Flora. I like the layout and info. That table of first appearances is a great idea.

Hi, Joseph. Yes, our tastes change over time and we are introduced to new authors when we meet new people and we want to share their interests. I already had a large collection of used mystery books to read thanks to my grandmother and her youngest sister. It is my Great Aunt Ruby who was the Agatha Christie fanatic and got me started on her. She had a letter Agatha wrote her in response to a question Ruby asked her about Egyptology. I think Christie was relieved to have someone ask her about her second husband's work so she actually answered this fan letter-in handwriting. It is my prized possession and you'll have to pry it out of my fingers when I'm dead. It is priceless :)

I didn't become a Doyle fan until I started watching Jeremy Brett. Until then I had read the more famous short stories, but now I've read all the novels and the little known stories that are rarely adapted to the screen.

Wonderful explanation Flora. Wasn't too fascinated about mistery and suspense fiction until I got married in 1992. Your flair shines in here and I see Amy in first page..as usual! Thanks for sharing 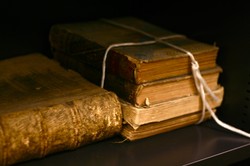