The Messiah and the Blossom

Ramosmania rodriguesii , sometimes known as the Cafe Marron Plant, is one of the world's most endangered species of tree. It does not help itself by only growing wild on one island, the island of Rodrigues, off the coast of Mauritius, and for many years the Mauritians thought it extinct, until the one surviving specimen was discovered and sent to Kew Gardens in the small hope that it could be propagated. While several staff were pessimistic about its prospects, Carlos Magdalena, a young Spanish worker at Kew refused to concede defeat. Here is the tale of what happened.

Picture of the Mauritius jungle courtesy of creativereaction

Several years ago, at a time when the Mauritian people thought that the beautiful white-flowered Ramosmania rodriguesii was as extinct as the dodo, a schoolboy on a biology project in the woods chanced upon a plant that he did not recognize. On bringing back a blossom of the profusely flowering plant, he was fortunate that his teacher recognized that it was Ramosmania. Scientists quickly took action and sent cuttings of the plant to the world famous Kew Gardens, for if anyone could propagate it, Kew could.

Kew's staff, many of whom have the world-renowned Kew diploma, swung into action and were easily able to propagate Ramosmania by vegetative propagation. This involves taking cuttings and growing them on in soil, and indeed they were successful-to a point. For the only way to ensure the survival of a species is for it to produce seed; and Ramosmania stubbornly refused to do so. Even this expert staff were becoming pessimistic about the prospects of what was what they feared soon to be one more species to become extinct.

But a young gardener, who had taken an interest in Ramosmania, arrived. Carlos Magdalena had passed the daunting Kew interview by declaring to the assembled professors and heads of department who comprise the interview panel that while his curriculum vitae was not as good as others, he was enthusiastic and that he needed Kew and Kew needed him, and then he told them   " You tell me what it takes to get a job here and I will go and do it. " Fortunately for the world of botany, the assembled great and good of the plant world were impressed and Carlos was taken on as an intern.

Good fortune smiled on Carlos, and just before his internship was due to end a job was offered and he  got it. He then moved upward by being accepted for the Kew diploma and passed. He was now in possession of what maybe one of the world's most prestigious gardening qualifications, and soon by 2003 he was standing in front of one of the specimens of Ramosmania and wondering how to propagate it. But other gardeners were sceptical. Why was he wasting his time on what was a dying species, there were  better things to do? But Carlos believed in the importance of obsession, as it drives those who possess it to break barriers and overcome obstacles. He also believes in passion, which is for him a driving force  for progress; and he was determined to induce Ramosmania to produce seeds-somehow!

Carlos knew that the tree's advantage is that it produced flowers in abundance, hence he could experiment with the flowers, knowing that more would grow. Each plant produced 20-30 flowers, and he had six plants.Let me explain. Plants have male and female sex organs and can self pollinate, so in theory if Carlos took some of Ramosmania's [male] pollen and brushed it onto the female organ the pollen should pass down the duct to reach the female egg and hopefully fertilization would take place.

One way was to alter its growing conditions. Carlos had noted that one seedling which had been grown in full sun did produce a fruit, though it later proved to be sterile,even in the superb conditions of Kew's micropropagation unit. Though Ramosmania  was a jungle plant he gave it more light. He also saw that the fruit was produced when the greenhouse was so hot that he was sweltering as he tended the plants,  so the thought came to him that the plant needed really hot conditions,  so he modified its environment by growing the potted plants as near a possible to the heating ducts in Kew's tropical house. Still no fertile seed!

He noted that the plants produced pollen, but when the pollen was applied to the plant's female organs, nothing happened. One way was to cut off the top of a female organ so as to make access to the tube easier.He tried about 200 times to no avail. Something was clearly going wrong and he could not see what it was. Carlos then spent time ascertaining as much as he could about the plant's floral  biology, and then he discovered that no one had ever studied how long it was in flower and even how long the pollen lasted. He noted that the pollen seemed to go brown after a few days and possibly lose its vigour. This he thought might part of the problem.

One day he was struck by a puzzling thought. Why was the flower remaining so big and beautiful after it had done its male duty by producing pollen? Then came the moment of illumination, that creative flash that solves many a scientific problem. The plant was no longer male! He recalled that while most plants are bisexual certain plants undergo sex changes. Ramosmania must be one of those that go through male and female stages. The flower was now a beautiful female seeking to be pollinated. But in the feminization process it was no longer producing pollen and what pollen it had produced had become infertile with age, as  pollen does not retain vigour for long.

The male stage preceded the female stage. By the time the plant turned female its pollen had aged, so the solution must be for the female to be fertilized by pollen from a new, young male flower. He chose a young flower , took some of its pollen and applied it. Then he waited. Then fruit appeared and they were sent to the micro-propagation unit.

This was not the end of the story, for he had to discover whether the seeds could be dried out, but fruits were coming in numbers sufficient to provide a stock of ready replacements. Over the course of a few months he collected 300 seeds.Then some of them were planted.

For days there was no visible progress, but then a seedling arose. But it was disappointing, for the seed had not released the leaves. Another failure! Then he noticed that some of the compost was slightly raised. Gently he blew  it away to reveal another seedling. Within three weeks they had germinated. For the first time ever the species had been propagated in cultivation. Moreover, as far as Carlos knew, this was the first time that a seedling of this plant had been seen in a hundred years.

As time progressed Carlos noted that the young leaves were thin and he realized that this was a defence against being seen an eaten by Mauritius' resident tortoise population. He saw that they become larger only when the tree grows to higher than head height for a tortoise.

The return to Mauritius involved overcoming some problems, for the island's authorities quarantined the seedlings for a while, a necessary  precaution against the import of diseases which could massacre the plant life of the small island. But Carlos had also brought six hundred seeds. These were eagerly taken by Mauritian gardeners keen to grow this survivor in their gardens.  Since then he has planted six hundred seeds in the wild on the isle  of Rodrigues, and about forty have grown into mature plants. The species had been saved.

In subsequent years Carlos earned the nickname of Plant Messiah [saviour] by working with endangered plant species across the world. His exploits are recounted in the book, The Plant Messiah."

The information here is taken from an article in The Horticulturalist, the journal of the Chartered Institute of Horticulture, Summer 2017. It was an edited extract of Carlos' book, The Plant Messiah.

Sadly I was unable to source a publishable photograph of Ramsmania.

As far as I know, only cuttings were taken, and as you know you can take cuttings without killing a tree, so I think that unless something bad has happened to it, the tree should still survive.

frankbeswick, Is the cafe marron whose profuse flowering attracted the biology schoolboy's attention still in existence?

True. Many people do not know that seeds respire very slowly and so use up energy, and s it is the case that small seeds run out of energy quicker than large ones. This is why gardeners who have been sold old seeds are unsuccessful.Seeds kept in cold conditions,of course,last longer. You are right about the possibility of a few older seeds growing, as the decay of the seeds probably follows a logarithmic curve.

Frank, interesting account. One thing about plants, extinction need not be as permanent as for animals in that seeds can remain dormant for years, then have some event such as being carried to the right place by an animal and germinate. Seeds years old do not do so well, but there is always a possibility of one or a few growing. It is a better chance in cold, where a seed might be preserved. Perhaps a better chance is the one plant discovered was in an obscure place. There are places not visited by humans. And the seed carried to a more obvious place on the wind or a bird. 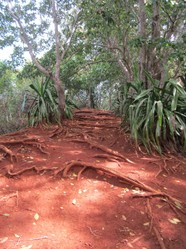 The Plant Messiah: Adventures in Search of the World#s Rarest ...
100%  34   17 DerdriuMarriner
Exotic Plants