Dangerous Garden by author, botanist, columnist, gardener, and nurseryman David Stuart acknowledges individual significance and societal impacts from the quest for plants to:

The 2004 release begins with an introduction to two of 10,000-plus world-renowned medicinal plants. The Harvard University Press publication considers:

• the placebo effect of justified or unjustified beliefs in curers and cures since the time of Roman imperial physician Galen (129 – 199?);
• the recorded uses of rhubarb, from Roman aphrodisiac to Medieval plague-fighter to sixteenth-century ague and syphilis remedies to twenty-first century late-spring pie-filling;
• the twentieth-century vetting of cancer, convulsion, paralysis-causing colchicine in arthritis and gout-prescribed, saffron-flavored, stimulating autumn crocus (Colchicum).

Identifying plant remedies for his pharmaceutical formulations numbers among Galen's many contributions to contributions.

Dangerous Gardens derail no afflictions other than malaria

Chapter Three finds controlling pain on the treatment agenda of:

Atropa belladonna, known commonly as belladonna or deadly nightshade, is a dangerous plant with beneficial and toxic qualities.

Historically Italian women used belladonna berry juice cosmetically for pupil dilation, which was considered seductive but which also could cause vision problems or blindness via prolonged use. As atropine, belladonna is still used today in Ophthalmology.

The fourth chapter gives as jump-starting or sustaining aphrodisiacs:

Chapter Five has as euthanistic/fatal options:

The sixth chapter identifies reversing, slowing or stopping biological clocks through reliance upon:

Pretty comfrey (Symphylum spp.) is popular in folk medicine and as cultivated or wild plant; US FDA banned its consumption because of dangerous amounts of naturally occurring alkaloids (hepatotoxic pyrrolizidine alkaloids) that may cause liver failure.

The eighth chapter keeps the focus on mind-related treatments through such hallucinogens as:

a plant with a dangerous beauty: berries, flowers, and foliage of deadly nightshade (Atropa belladonna), also known as belladonna

Atropa belladonna, known commonly as belladonna or deadly nightshade, is a dangerous plant with beneficial and toxic qualities.
Historically Italian women used belladonna berry juice cosmetically for pupil dilation, which was considered seductive but which also could cause vision problems or blindness via prolonged use. As atropine, belladonna is still used today in Ophthalmology.
eye examination; portions of retina as seen through undilated pupil and dilated pupil: National Eye Institute/National Institutes of Health, CC BY 2.0, via Flickr @ https://www.flickr.com/photos/nationaleyeinstitute/7544457396/

San Pedro cactus (Echinopsis pachanoi) has been used in Andean Mountain regions for healing and religious divination for three millennia.

Dangerous Garden: The Quest for Plants to Change Our Lives by David Stuart ~ Available now via Amazon

Botanist and gardener David Stuart presents double-edged plants of botanical medicine: plant-based remedies as not only soothing and curative but also enslaving and killing.

"Atropa Belladonna, inspired by deadly nightshade, with the richly decadent scent of dark cassis berries blended with the heady white flower blooms of narcissus and jasmine, on a base of rich bourbon vanilla."

Atropa Belladonna Fragrance by Shay & Blue ~ "All of our scents are made with real flowers, fruits and spices with a long-lasting scent."

"Atropa Belladonna, inspired by deadly nightshade, the richly decadent scent of dark cassis berries blended with narcissus and jasmine, on a base of rich bourbon vanilla. Daringly different, chic and mesmerising."

WriterArtist, Thank you for appreciating Dangerous Garden. It's a beautiful, excellent read that I consult a lot, frequently, often. It's a way of avoiding repetitions of the tragedy of plant misidentification that's the subject of Jon Krakauer's book Into the Wild and Sean Penn's subsequent film.

It is amazing to see how many plant species are poisonous. It takes quite some time to see the aftermath of certain plants, toxic levels can make the difference. Many of these poisonous plants can and are used in medicine but it is always good to know which plants are safe for the home garden. An eye opener, this book certainly is good to have for gardeners.

katiem2, Thank you for the visit and the appreciation of the book. I love my copy and refer to it all the time. Should you write another children's book about your redhead who likes herself, and if that book is about green roofs, then this would be an excellent resource on what NOT to have in her garden.

I sometimes wonder anytime I see a cat or dog chewing on plants out of doors. This is a practical bit of information, thank you for the careful research.

frankbeswick, Please accept my apologies for the delay ... and the misinformation.
The Food & Drug Administration, not the United States Department of Agriculture, in 2001, not 2007, advised against external and internal use of comfrey, respectively on open wounds and because of cancer and liver damage.
I don't seem to be able to access the advisory even though I have the source information: FDA. 2001. FDA advises dietary supplement manfacturers to remove comfrey products from the market. USFDA, Center for Food Safety and Applied Nutrition.
A 2005-released study -- Mutagenicity of comfrey (Symphytum Officinale) in rat liver, by N Mei, L. Guo, PP Fu, RH Heflich and T Chen -- in the British Journal of Cancer 92(5): 873-875 -- gives the FDA URL, which does not bring it up, at least for me.
The above-mentioned study likewise lists in its bibliography Rode, D. November 2002. Comfrey toxicity revisited. Trends in Pharmacological Sciences 23(11): 497-499. The latter notes that "The conclusion that comfrey is not safe for internal use in humans is primarily based on studies in which high levels of purified PAs [pyrrolizidine alkaloids] were administered to rodents.Systematic toxicity testing or clinical trials have not been performed. Although PA poisoning in humans can occur, this is most commonly a consequence of consumption of plants other than comfrey." She suggests that "Clearly, the risk of hepatic damage during treatment with comfrey will be influenced by its source, the amount consumed, the duration of treatment, and the health and nutritional status of the patient." Rode states that low-protein diets facilitate the PA toxicity that high-protein diets minimize.

Thanks Derdriu.I await your response.As one who suffered liver disease as a child I have to be careful.

frankbeswick, The fuss happened about 10 years ago because of liver damage from ingestion. But the USDA then also mentioned that external applications can be problematic near or on broken skin. I will check and get back about this since I'm writing from memory, without specifics at hand.

My doctor recommended comfrey oil for my troubled knee joints, and it has been beneficial when rubbed in. What was the USDA warning about it?

Mira, Me neither, I don't watch much television.
Elementary is considered an American series even though there is U.K. involvement, most noticeably with English actor Jonny Lee Miller as a Sherlock Holmes updated to 21st-century New York City. I like the way that it's so educationally entertaining, with episodes on animals, artwork, fossils and plants.

Tovah Martin’s The Indestructible Houseplant: 200 Everyone Can... 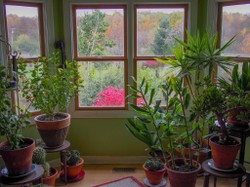 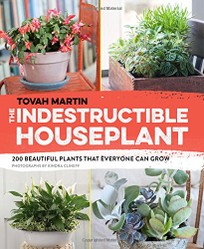 Tovah Martin’s The Indestructible Houseplant: 200 Everyone Can Grow