The USDA with Michele Obama unveiled the new Food Plate. The Food Plate replaces the old Food Pyramid as a quick and easy way to teach people what to eat and how to eat healthier.

On June 2, 2011 First Lady Michelle Obama along with Agriculture Secretary Tom Vilsack unveiled a new food representation guide. In place of the food pyramid, which has been in use since 1992, we now have a plate to teach adults, teens and children the types of food they need to eat to live a healthier life.

Dieticians, Health Care Providers and Health Organizations are calling the new plate an improvement. Many of us (the author included) have been using plate icons for years to teach students, clients and children about healthy eating, because it is a quick method to teach and a much easier method to understand than the older food pyramid.

The new plate was created by the USDA (Department of Agriculture) with input from federal health official and Mrs. Obama's anti-obesity team.

Cost of the New Plate

The development of MyPlate along with creating the ChooseMyPlate.gov website, educational materials and an new educational campaign will cost about $2 million.

From the Department of Food and Agriculture

Seven Tips from the Dietary Guidelines

3. Make half of your plate fruits and vegetables.

4. Make at least half your grains whole grains.

6. Compare sodium in foods like soup, bread and frozen meals  ― and choose the foods with lower numbers.

7. Drink water instead of sugary drinks.

MyPlate is an Uncomplicated Icon

"MyPlate is an uncomplicated symbol to help remind people to think about their food choices in order to lead healthier lifestyles.

This effort is about more than just giving information, it is a matter of making people understand there are options and practical ways to apply them to their daily lives.”

“This is a quick, simple reminder for all of us to be more mindful of the foods that we’re eating and as a mom, I can already tell how much this is going to help parents across the country.

When mom or dad comes home from a long day of work, we’re already asked to be a chef, a referee, a cleaning crew. So it’s tough to be a nutritionist, too. But we do have time to take a look at our kids’ plates.

As long as they’re half full of fruits and vegetables, and paired with lean proteins, whole grains and low-fat dairy, we’re golden. That’s how easy it is.”

Looking the the New MyPlate, their recommendations look close to those orignially developed by the American Diabetes Association. In this new method, the plate is divided into four not quite equal quadrants.

The original American Diabetes Association that go along with the traditional plate method are:

Understanding the Plate Method of Eating
The plate method is an easier way than the old pyramid to teach children and adults, about what to eat and how much to eat. Using the plate method will help you eat healthier.

Poll - What do you think about MyPlate?

On the new ChooseMyPyramid.gov website, the USDA has compiled the 10 Tips Nutrition Education Series. This series is designed to provide consumers and professionals with easy-to-follow tips in a convenient, printable format.

Visit the ChooseMyPlate.gov website for more information on each of these different tips.

Find out More about MyPlate

MyPlate - The New Food Pyramid
Discover more about the new food pyramid, the new food icon from the USDA, MyPlate.gov.

MyPlate Posters, Stickers and More
MyPlate materials, posters, pins, stickers, magnets and bookmarks that can be used when teaching nutrition.

USDA Ditches Food Pyramid for a Healthy Plate
A colorful four-part plate, with a side dish of dairy, has replaced the 19-year-old food pyramid as the icon of the new U.S. Dietary Guidelines. The new icon, called "My Plate," is split into four sections -- red for fruits, green for vegetables, orange for grains, and purple for protein -- with a separate blue section for dairy on the side.

A Healthy Plate - PDF Handout
The USDA is bringing a new food icon to the table, replacing the food pyramid with a plate. WebMD's Director of Nutrition, Kathleen Zelman offers up some healthy meal options to make that plate great.

Let's Eat for the Health of It!

More Articles on the New MyPlate

No More Food Pyramid: Nutritional Icon Is Now a Plate
The food pyramid that represented a healthy diet for almost 20 years now gives way to a food plate, the U.S. Department of Agriculture announced today.

The USDA Ditches the Food Pyramid and Offers a Plate
So long, pyramid. Welcome, MyPlate! First Lady Michelle Obama unveiled on Thursday the government's new symbol for healthy eating, a colorful plate divided into the basic food groups, which will officially replace the well-recognized but perplexing food pyramid.

USDA to reshape how we see dietary nutrition
Farewell, food pyramid. Government officials are getting ready to dish out nutritional advice to the nation on a more appetizing platter.

USDA nutrition guidelines on 'My Plate"
The new icon (www.choosemyplate.gov), called My Plate, is divided into four sections — fruits, vegetables, grains and protein. It replaces the familiar pyramid image, which was first introduced in 1992 and revised in 2005.

USDA Unveils New, Simple Tips to Stay Healthy, Active and Fit
Today was an exciting day at USDA as I was joined by First Lady Michelle Obama and Surgeon General Dr. Regina Benjamin to unveil USDA's new food icon, MyPlate. The icon is a departure from MyPyramid and serves as a quick, simple reminder to all consumers, built off of the 2010 Dietary Guidelines for all Americans.

A Simple Icon to Inspire Consumers

"What we looked for is a new simple icon that would inspire consumers to act on the dietary guidelines' messages."

Early Reports on the Plate Icon Replacing the Food Pyramid

A Plate Icon to Replace the Food Pyramid
The USDA is replacing the Food Pyramid used for the last two decades as the food representation guide with an easier to understand plate designed to encourage healthy eating.

Eat, Drink and Be Healthy

Resources to Help You and Your Family Eat Healthy

More on Food and Nutrition from the USDA

Food and Nutrition Services
FNS provides children and low-income people access to food, a healthful diet, and nutrition education. We help nearly one in four people.

A Guide to Get the Little Monsters Healthy

America's Move to Raise A Healthier Generation of Kids

Let's Move!
Let’s Move! is a comprehensive initiative, launched by the First Lady, dedicated to solving the problem of obesity within a generation, so that children born today will grow up healthier and able to pursue their dreams.

Let's Move - Eat Healthy
Let’s Move! offers parents and caregivers the tools, support and information they need to make healthier choices while instilling healthy eating habits in children that will last a lifetime.

What do you think about the New Food Plate?

Tandemonimom
I have to agree that it is an easier visual. Part of the reason the Plate Method is the one that I've been teaching to kids for ~ 5 years. It is really easy for them to remember and easy for them to teach their parents. :)

The new food plate is certainly an easier visual to keep in mind! 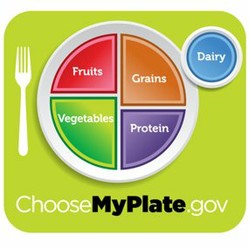