This may sound like a gender specific article. It is not. All women and any man that has women in his life that he cares about should read this.

Finding the right Physician is often a difficult task but a crucial aspect of personal health care. I was extremely fortunate to have a Gynecologist that was thorough and extremely knowledgeable, understanding, and honest. He possessed every attribute I expected from my physician. He was a staunch crusader in the fight against ovarian cancer and believed it was of utmost importance to raise public awareness. In his honor, I want to pass along what he taught me.

With great sadness, I bid good-bye to my doctor of over 30 years when he passed away of heart related complications from surgery. His death was an overwhelming loss for his patients and the community at large but the memory of his dedication to providing excellent health care lives on through many healthy women and “survivors”...

I had entered his office on a Friday afternoon at 4:00 for a routine annual exam.  As was his habit, he spent a substantial amount of time talking about the past year and asking various questions. In this discussion I was prompted to mention I had pulled some back muscles earlier in the summer and yes, I confirmed that  I was now taking protonix for some occasional stomach discomfort. When I thought the appointment was over, he advised me that I would be having an internal ultrasound before leaving his office and he would be reviewing the images on the screen.

An hour later I was leaving his office to have a blood test called a CA-125 and was scheduled to return to his office on Monday, with a tentative diagnosis of stage III or IV Ovarian Cancer looming over my head.

On Monday, he reviewed all results with me again and spent a great deal of time answering questions honestly and with compassion.  A biopsy with possible surgery was scheduled with a thorough explanation of what it would entail, with a worst case or best case scenario.  He was candid. Based on what he saw, the odds were not in my favor but he reassured me that he would be beside every step of the way and that if further treatment was required, he would see to it that I received the best available even if it meant having to send me elsewhere.

I have never felt such overwhelming relief as I did when I awoke in the recovery room and learned that although some surgery had been required, preliminary results indicated it was not Ovarian Cancer after all.  When I returned for my follow up appointment and the “official” report, it was confirmed that the initial results were indeed accurate.

It was at this appointment my physician expressed his relief in my diagnosis but his frustration with the increasing incidence of Ovarian Cancer, the continual late diagnosis and the high mortality rate from it.  He was disgusted by the fact that technology exists that can assist with early detection but is not routinely utilized as a screening tool on an annual basis.  He also expressed a firm belief that greater public education concerning Ovarian Cancer could make a significant difference with earlier detection and treatment of the disease.

It has been 7 years since we had that conversation. I do believe that there is far greater public awareness now but I am still prompted to write this.  It is not my goal to cause anyone anxiety, panic or undue worry. I simply want to tell of my experience perhaps encouraging others to be conscientious of how they feel and prompt them to see their physician if they have any pertinent questions or concerns.

Statistics on how many new cases of Ovarian Cancer are diagnosed every year in the United States vary.  All point to a number greater than 20,000 and there are approximately 14,000 deaths attributed to it annually.

It is ranked the 5th most common disease affecting women and causes more deaths than any other type of cancer in the female reproductive system.

Though it typically affects women over the age of 50 it also affects much younger women. Age should not be a consideration if there is any indication symptoms may be present.  For example, I’ve typically thought of colon cancer as being a disease striking older people but it does occur in younger individuals as well. A friend of mine lost a son at the age of 18 to the disease. Not being in the typical age range for this disease may have contributed to a delay in an accurate diagnosis at the onset of his symptoms.

The cause of Ovarian Cancer is still unknown but it appears to be affected by different factors. Those I am listing are not all inclusive but represent the most commonly identified.

The decreased risk factors include: having given birth (and the frequency of births) earlier in life, having taken the birth control pill, tubal ligation, hysterectomy and oophorectomy.

Increased risk factors include a personal or family history of breast or ovarian cancer, Estrogen replacement (not with progesterone) for over 5 years, being infertile, having endometriosis,  possessing certain gene mutations or being over the age of 55.

In the early stages there may be no symptoms or they may be attributed to other conditions because they are vague, subtle or non specific. This is the primary reason most cases do not present until they have reached stage III or IV.  These symptoms include, but are not limited to: back pain, abdominal pain, digestive issues, bloating, constipation, fatigue and unexplained weight loss or vaginal bleeding.

The general consensus is that accurate diagnosis or early detention of this disease is frequently difficult. It is believed that initial screening should be done through a pelvic examination followed by blood tests including a CA-125 (or other markers). A transvaginal ultrasound is also frequently recommended and my physician firmly believed this was essential.  Diagnosis must be confirmed with a biopsy and observation of the abdominal cavity before any treatment options can be discussed or initiated. When Ovarian Cancer is suspected in a younger patient, a less intrusive tool: magnetic resonance imaging (an MRI) is often used instead of the transvaginal ultrasound.

Early detection and diagnosis is fundamental but unfortunately, it doesn’t happen with the frequency it should. For this reason the prognosis is usually not promising for the majority of women diagnosed annually. However, with greater awareness and a proactive approach to our personal healthcare and that of those we care about, the odds of earlier detection may improve. This may eventually afford those diagnosed with this disease a wider range of successful treatment options and longer survival rates.

In closing, I am not a doctor, a nurse, or otherwise employed in the medical field but I was a patient.  A patient that was fortunate enough to have a physician that readily identified symptoms that were indicative of something being amiss and responded accordingly without delay.  Though it was not  the “worst case scenario” as we initially feared, it was an experience I will never forget and it is one I, along with family and friends, learned a great deal from.

I would like to recommend the following National Cancer Institute website; http://www.cancer.gov/cancertopics/wyntk/ovary. This site presents far more information than I have provided here and uses easy to understand terms, descriptions, and illustrations.

Sorry to learn of your doctors passing, what a scary time. Ovarian Cancer is scary and yet knowing the things to watch for and prevention brings us empowerment to avoid such diseases. Great Article. :)K

Thank you for this article. It was very informative... Ovarian cancer is a very frightening subject that is sometime avoided because of that.. People need to be more aware, and this artice was top notch!

My heart truly goes out to any woman battling ovarian cancer and to her family/friends as well. It is terrifying how many lives it touches and I can only hope that someday no woman will have to face this, or at the very least, will not have a delay in diagnosis or treatment. 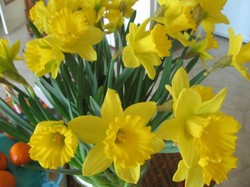